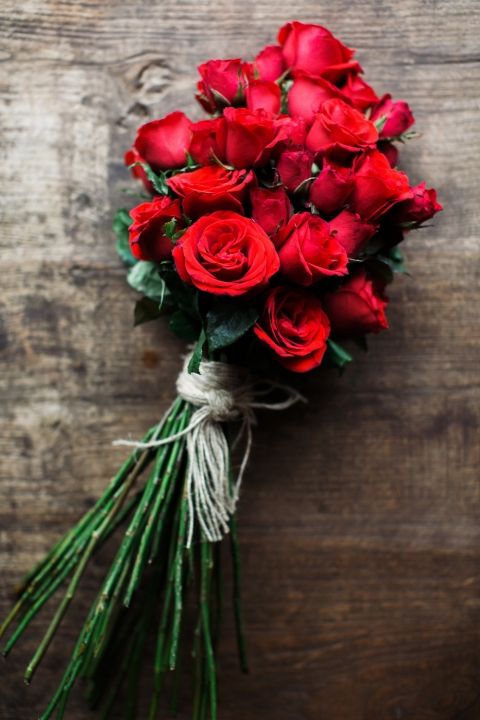 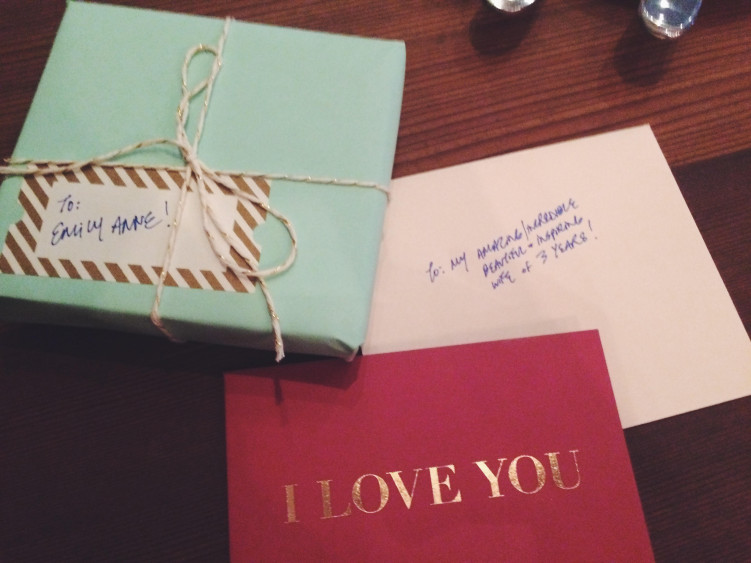 our third anniversary was celebrated in true san francisco style.
it was chase’s year to plan, i woke up to some flowers as a surprise and then, continuing our little scavenger hunt
tradition, he set up a fun surprise night in the city. it was on a monday
after a busy day of work with lots going on, so it was nice & relaxing. 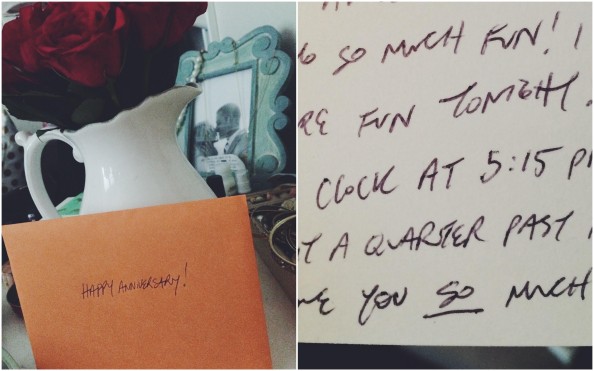 i woke up to roses and a card with instructions to “meet at the clock”
later that night…this is an SF tradition we learned about
on this walking tour, so i loved this little touch already. ^^ 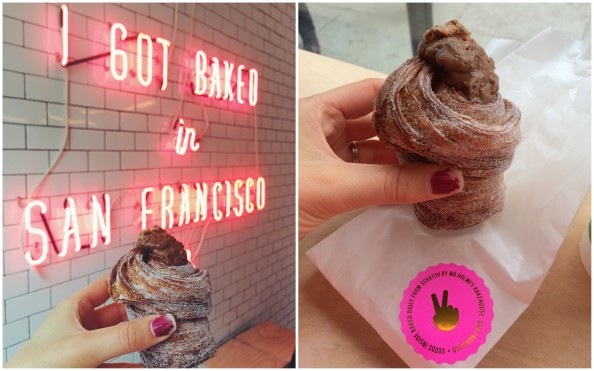 we stopped at mr. holmes again because the cruffin = special occasion 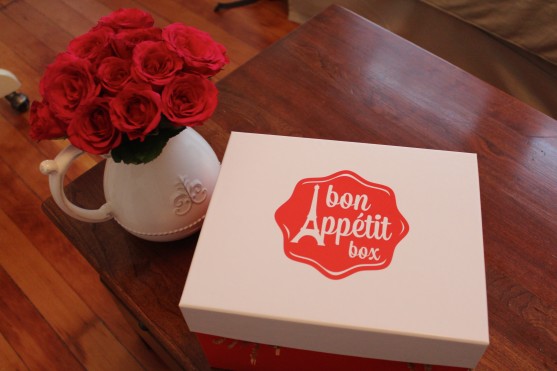 i gave chase this little amour box from bon appétit box, because how
perfect is it? especially for an anniversary. boy gets girl flowers, girl
gets boy a box full of treats :) …gourmet, fancy, french treats. 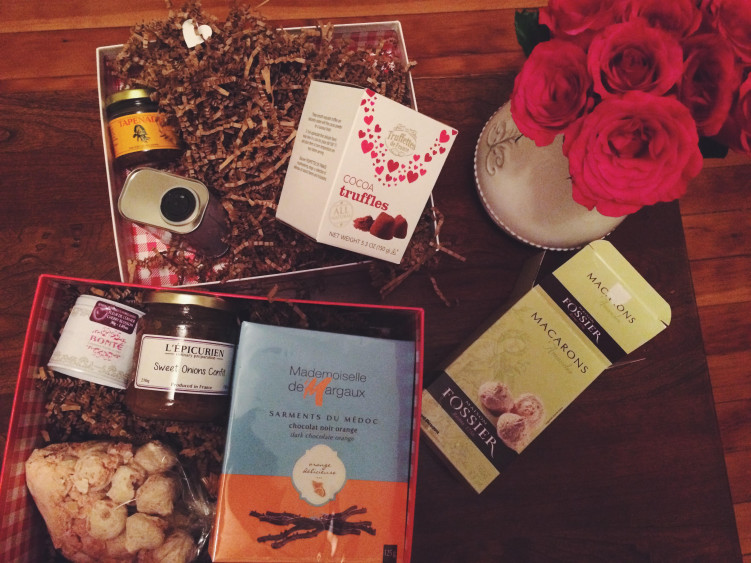 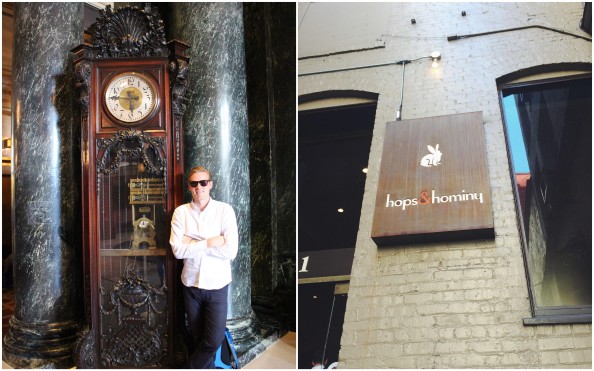 later we “met at the clock” which every san franciscan knows is the
clock at the st. regis hotel in union square. loved this clever meeting point. 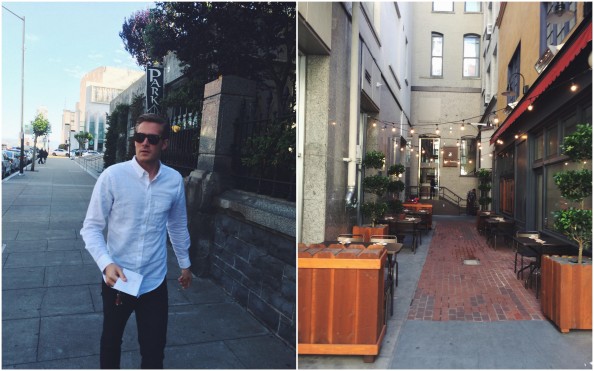 i followed some clues to find our dinner in this cutest alleyway
at hops & hominy. so perfect, and somewhere we’ve wanted to go! 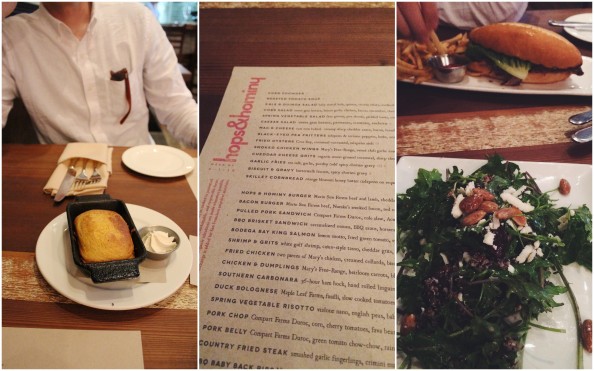 it’s pretty hard for me to not take pictures of a meal…even when
it’s not a feature–haha what can i say, i like remembering my meals
and celebrations especially! also, that cornbread skillet appetizer…yum. 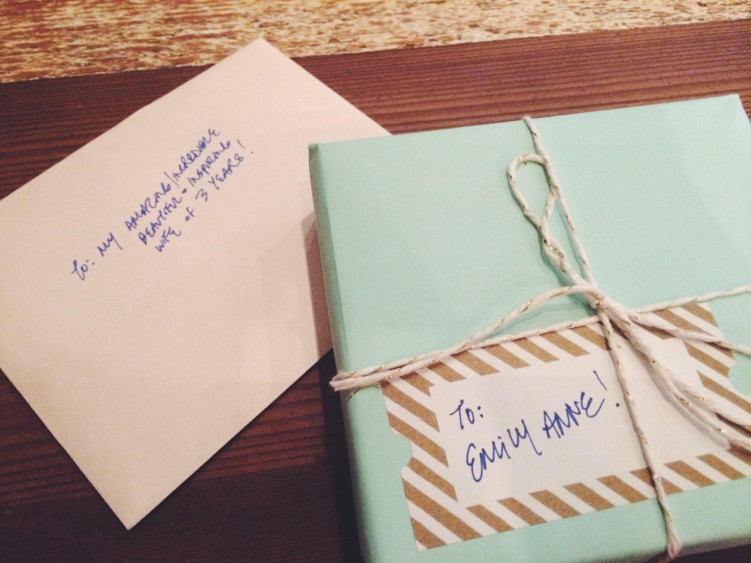 chase is probably the closest thing to a perfect gifter,
and even his wrapping is perfect. (fun fact: he wraps all
gifts at our house. i am the worst at it. he is the best at it.) 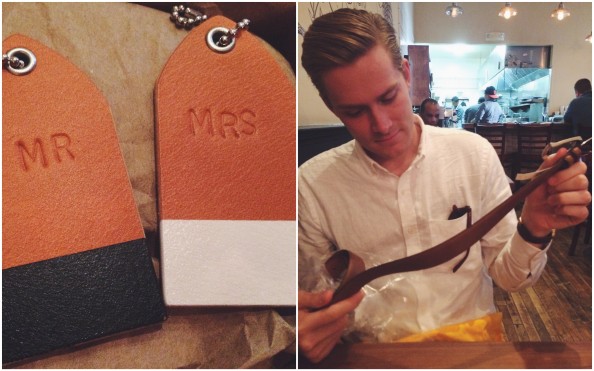 looks like we both went with the traditional leather theme for 3 years! i was
boring with a leather belt, and chase found leather luggage tags which wins. They were so cute as well because as you can see they had Mr and Mrs on them. I was actually considering getting Chase a Custom Anniversary Gift to have as a keepsake, maybe I’ll have to try that next year. 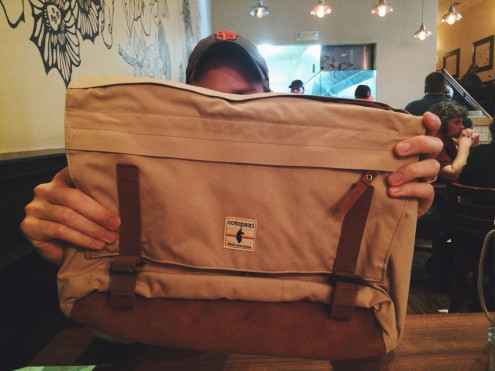 i also got him this cotopaxi bag because it’s so perfect for work and
the city and it tied in with the leather theme too :) 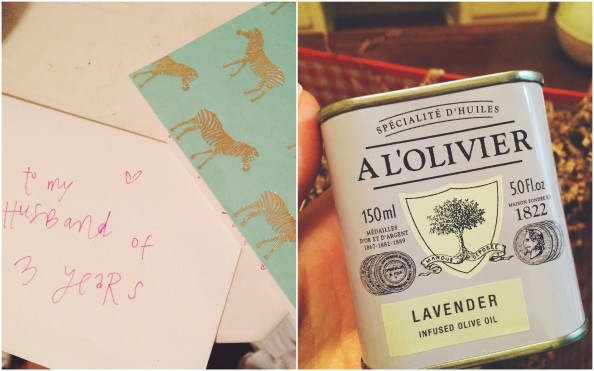 we try to keep our anniversary gifts to be experiences/trips/events, so
we just got these as little mementos of the 3 year traditional gift. deets on
the biggest adventure we just booked will be coming soon on the blog! 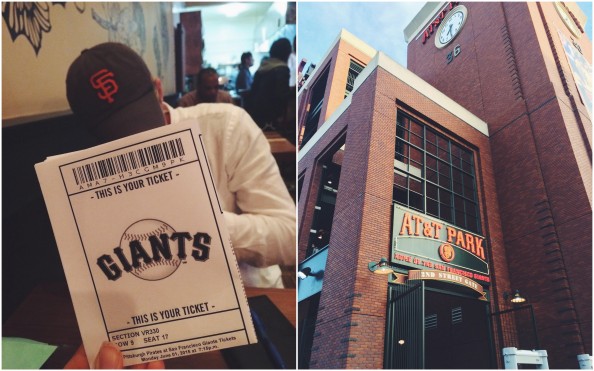 chase gave me the “experience” gift to use that night! he had the waiter
bring over giants baseball tickets and i said, “fun!! when are these for?”
and i looked up and he had put his giants hat on…haha for tonight of course! 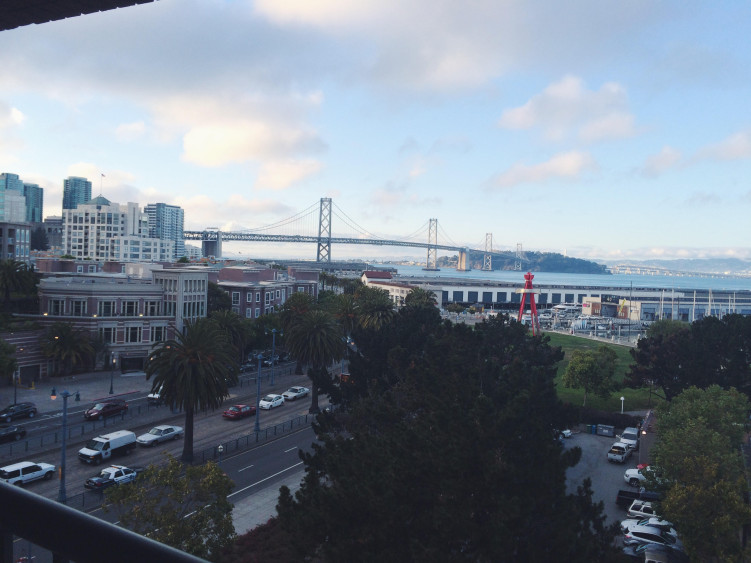 ^^ the view from the stadium…can’t beat at&t park right on the water.
a sporting event may not be every girl’s ideal anniversary date, but it’s mine!
i love watching sports with chase and what’s more classic than baseball? My friend went to an NFL game with her husband in Australia for their 5 year anniversary and they both loved it! She even surprised him with a jersey from the NRL Store of his favorite team for a gift. 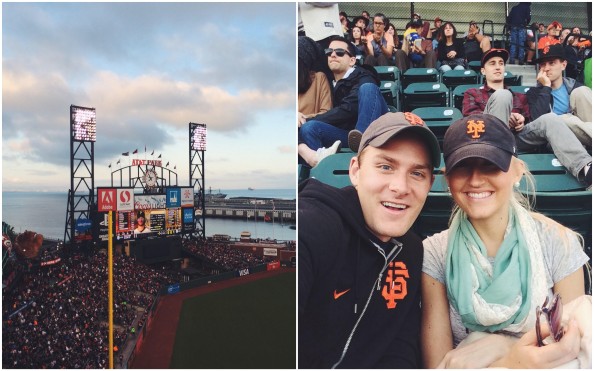 we left dinner and headed to the game on what turned out to be
such a pretty night. we’re soaking up these san francisco memories! ^^
(ps my hat IS a giants hat, but old school when they used to be NY giants!) 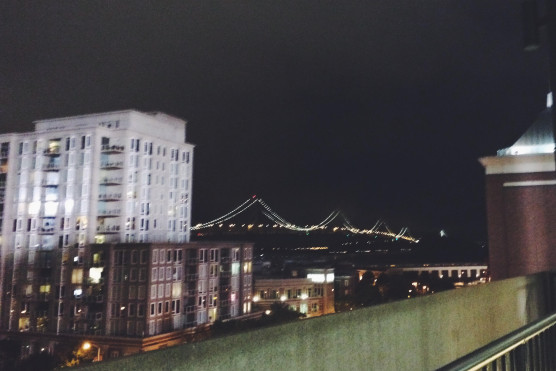 we left the game and the train was so full, and it was the prettiest
night with the city all lit up…so we decided to walk home.
how often in your life can you walk home from a major league
baseball game? we better take advantage while we can! it was truly an experience that we’ll never forget. chase is particularly excited about having done this, and i won’t be surprised if he starts wearing something similar to these sunglasses for baseball players just so that he can relive this memory time and time again, as well as teasing passers by that he is actually a new and upcoming player. insert eye roll here. he is definitely the type of person to do this, so watch this space. this day, from start to end, has just been amazing! 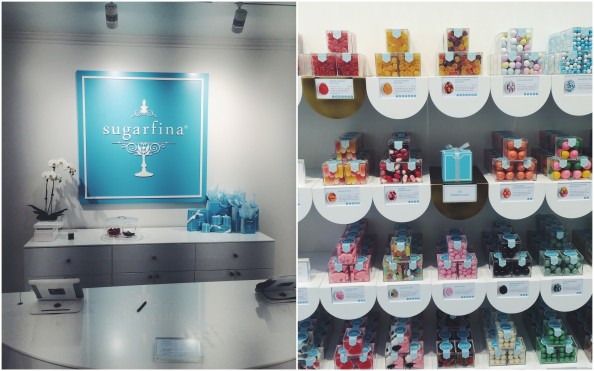 chase planned a stop into the cutest candy shop on the way home.. 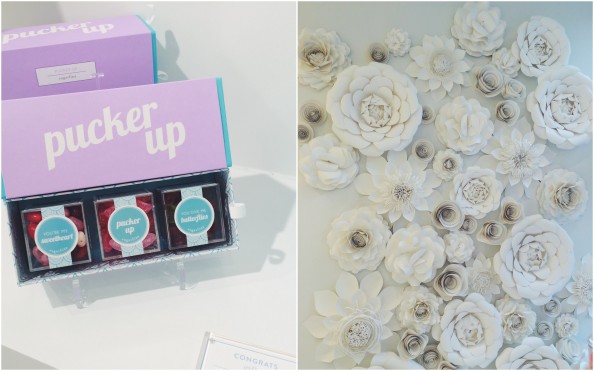 so we definitely got our fill of sweets to end the night! 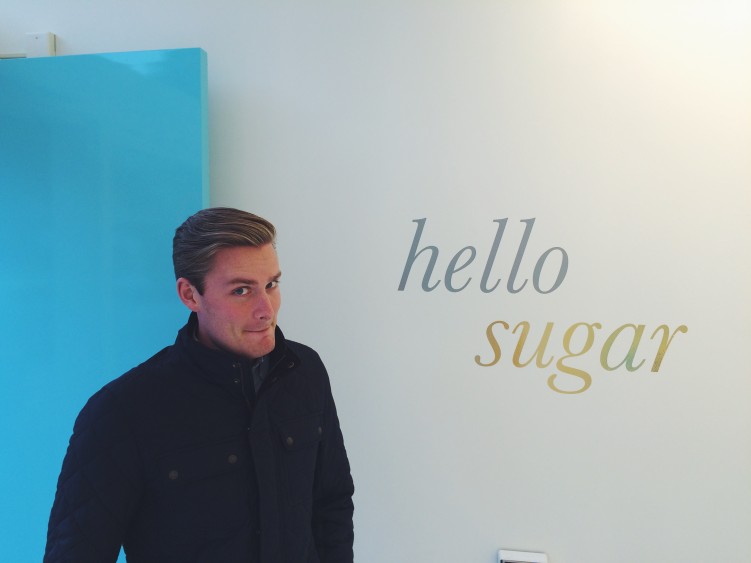 thanks to my sugar for planning a fun night, and for being married to me
for 3 whole years. i can’t wait for 300 more!