10 Dutch foods to try in Amsterdam 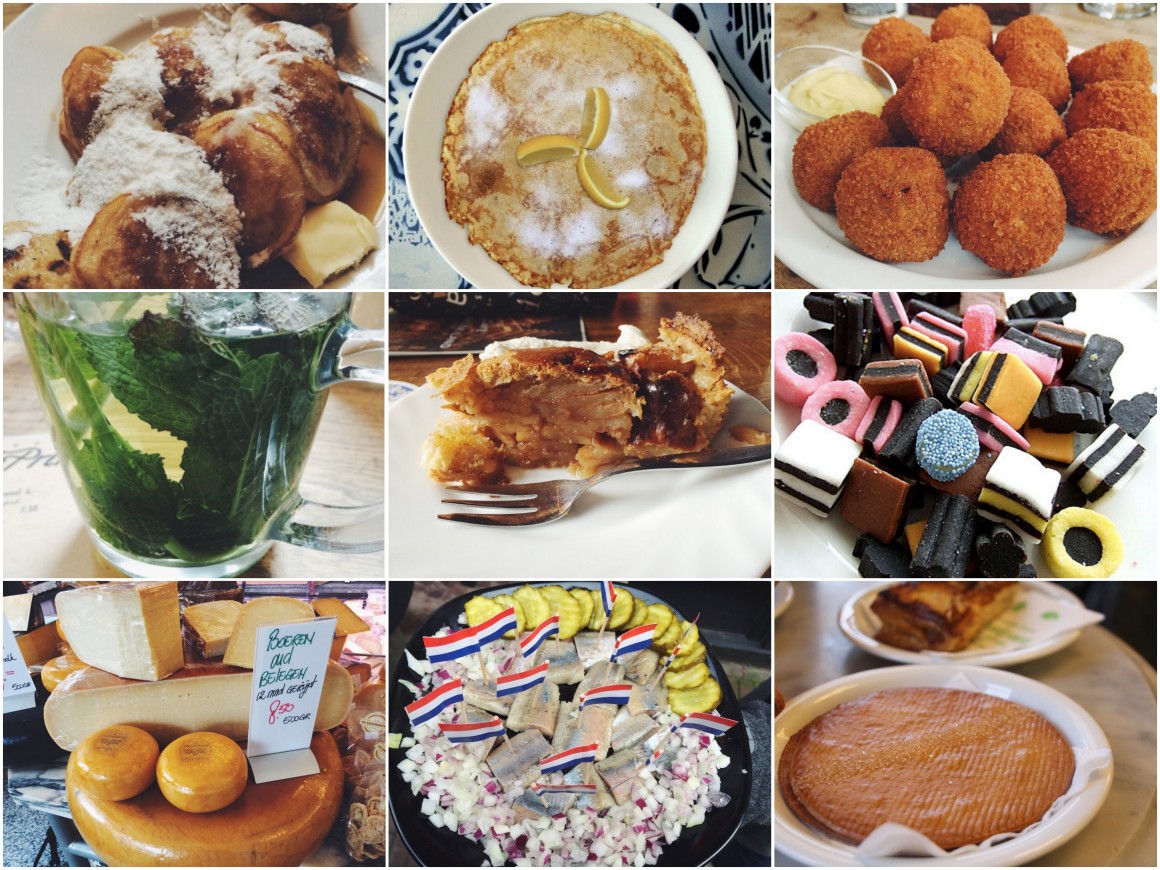 One of the best ways to get to know a new place is through its food.
Maybe I just love food too much, but I really think this is true!
I always have a list of local foods I want to try in each new place,
and some of the best memories with a place can be associated with
a taste or smell that you experienced there. Exotic foods are not always
good, but they leave a lasting memory and give you a (literal) taste of a place.

Amsterdam is no exception to this! Although it’s a very international city these
days with a lot of different cultural influences, the Dutch food culture is still strong.
I’ve tried many of the traditional foods so far while here, but I wanted to make sure
I got the full experience and taste while we are living here. I signed up for a food tour
right in our cute neighborhood of the Jordaan. It was with Eating Amsterdam, and
that is exactly what we did! I feel like we ate our way through the city and I’m still full.

I’m using my experience on the tour and from living here to write a list today of 10
Dutch foods you need to try while in Amsterdam/ Holland! Get your appetite ready.. 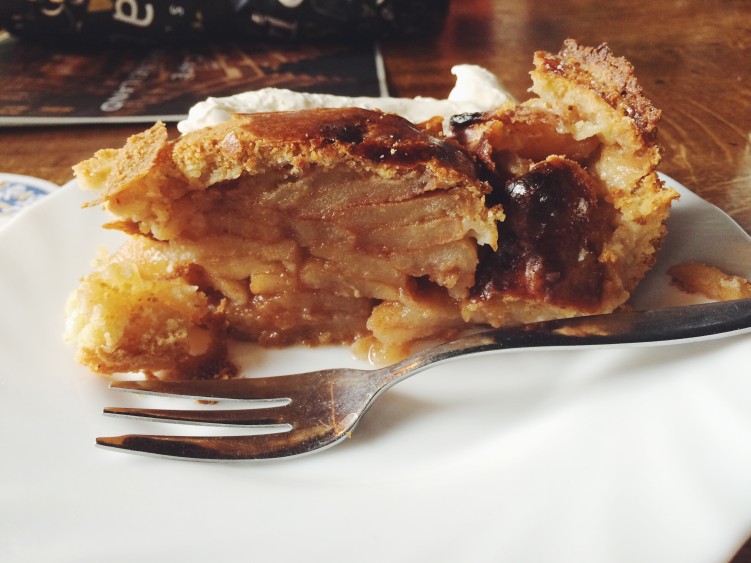 I don’t always put my lists in a particular order, but trust me: this is definitely
listed as #1 for a reason. In my opinion, this is the best food that the Netherlands
has to offer. What makes it different? The deep-dish crust. That beautiful, amazing,
thick cakey crust. The filling is simple but fresh: apple slices coated in cinnamon,
sugar & lemon juice. It is life-changing apple pie, I promise. Just be sure to go to
the right place, and order it with cream: Cafe Papeneiland and Winkel 43 are both
good options and right near each other. Papeneiland is fun to visit because it’s over
400 years old! When Bill Clinton visited he loved his slice so much that he ordered an
entire apple pie to take back to his hotel…and you may be tempted to do the same :)
PS- in Dutch, apple pie is called appeltaart, just FYI when you see it on a menu! 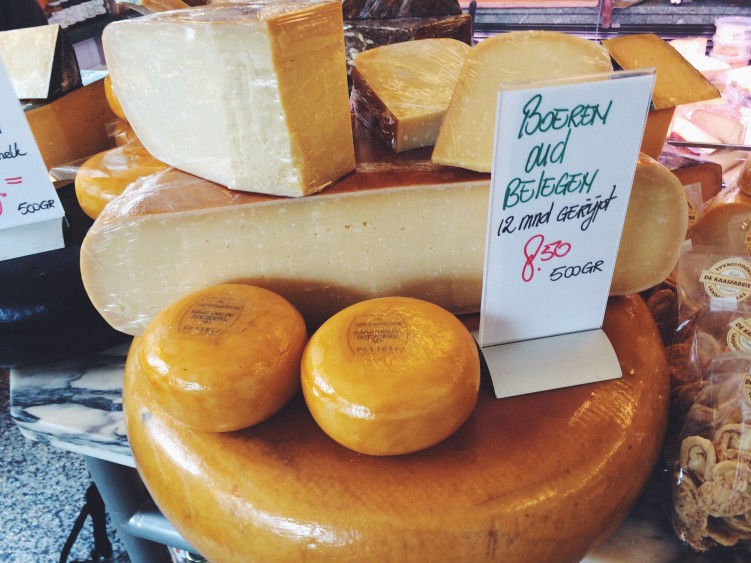 Nicknamed “yellow gold” by locals and called “kaas” in Dutch, the cheese here will be
your new favorite. Variations of Beemster & Gouda are our very favorite, and production
is done right near Amsterdam (we even have the town of Gouda by us, which Gouda cheese
is named after! They never placed a copyright on the name, so other places make it too…but
it originated right here in the Netherlands). The Dutch people eat over seven pounds of cheese
each year (per person) … they take their cheese seriously and so should you! You can also pair a
tasting with some Dutch sausage such as rookworst. Be sure to stop into a cheese shop anywhere
through the city for samples. a lot of places even package it up so you can take it home on the flight!
My very favorite is “Old Amsterdam” version of Gouda, which is also really common in the U.S.
(I think it’s even sold at Trader Joe’s!) 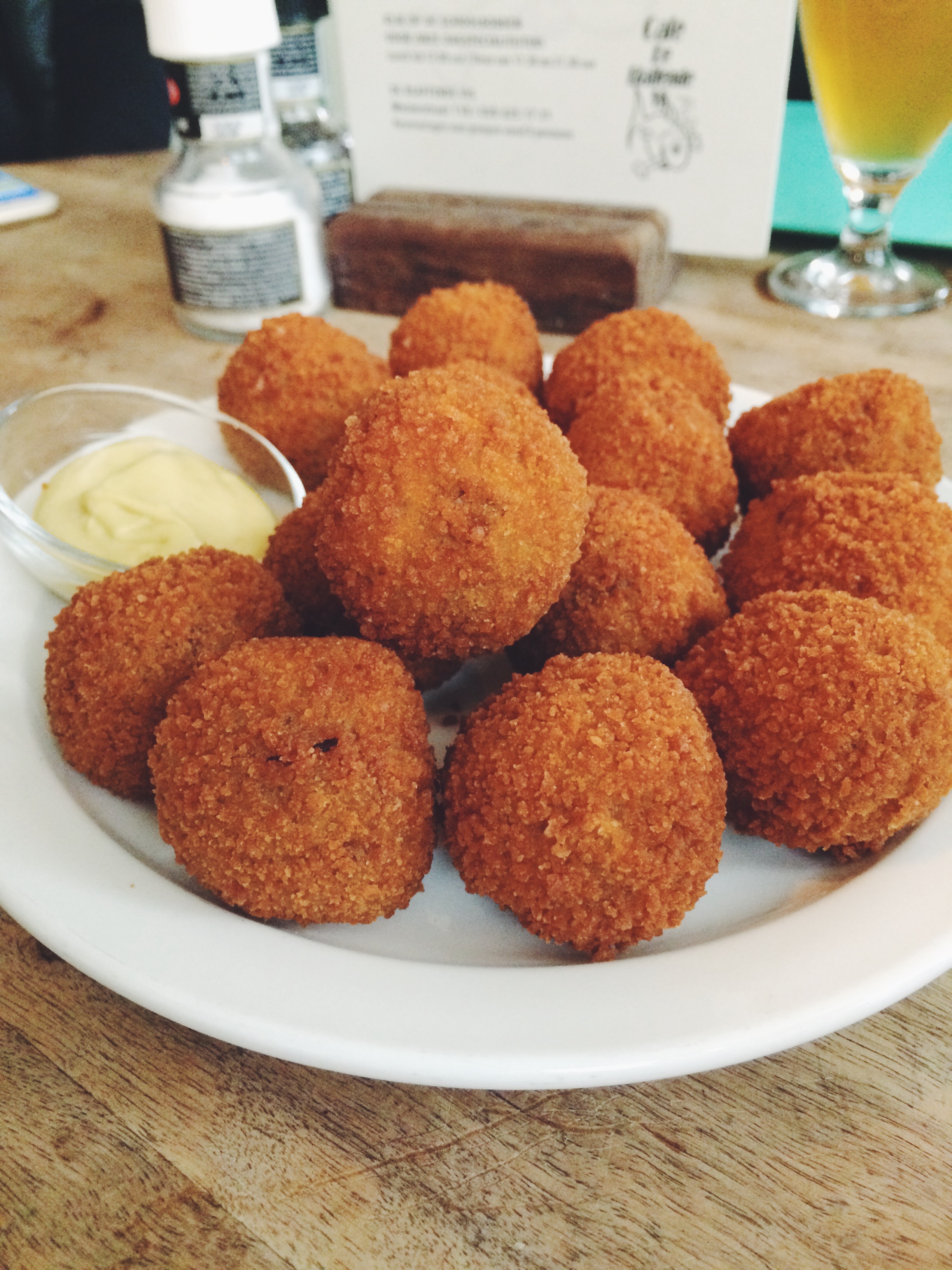 These are a (pretty unhealthy) favorite Dutch snack/appetizer. Sometimes they are in
a different shape – called croquettes – but both are the same: basically fried gravy balls!
It sounds odd and it is, but it’s worth ordering a small plate somewhere and trying one or two.
Be sure to dip them in mustard for an even more local taste. Beware, they are really hot so
don’t burn your mouth! Try them from Van Dobben, Holtkamp, or Kwekkeboom. 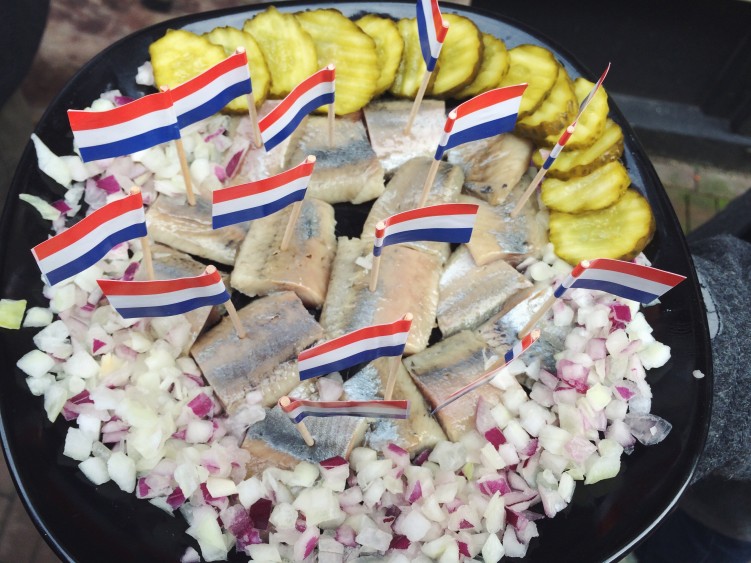 This may not be my first choice when it comes to Dutch food, but it’s a very favorite for locals.
You will pass herring stands all through the city. The herring is brined, and will always be
served with raw pickles and onions. It’s easier for first-timers to eat in a sandwich, but locals
tend to eat it sliced up plain (or whole, in some parts of the country). I’ve had the pregnant excuse
while living here so I haven’t tried this dish, but the food tour took us to Vis Plaza which is a great
fish shop in the neighborhood…you can also find fish stands serving it up all through the city. 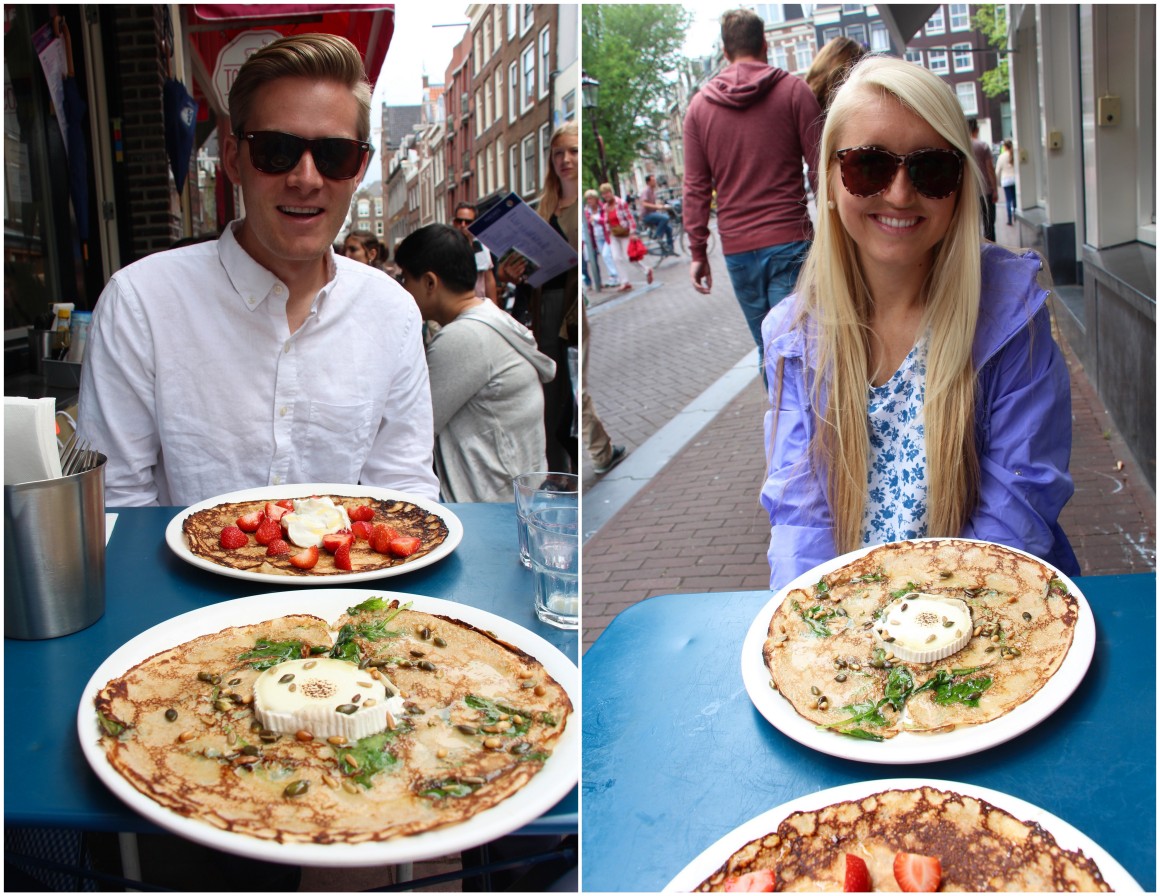 These are another absolute favorite that you have to try while here! Once again you will
find pancake houses all over Amsterdam, but there are some certain best spots. Pancakes!
café is a fun (yet crowded) little spot. Wherever you go, note that the Dutch like to eat their
pancakes later in the day (for lunch or dinner instead of breakfast like in America)…and
although there are sweet options, there are a lot of savory ones too. It’s also good to know
that they are bigger pancakes like the size of crepes, but a bit thicker. Delicious! 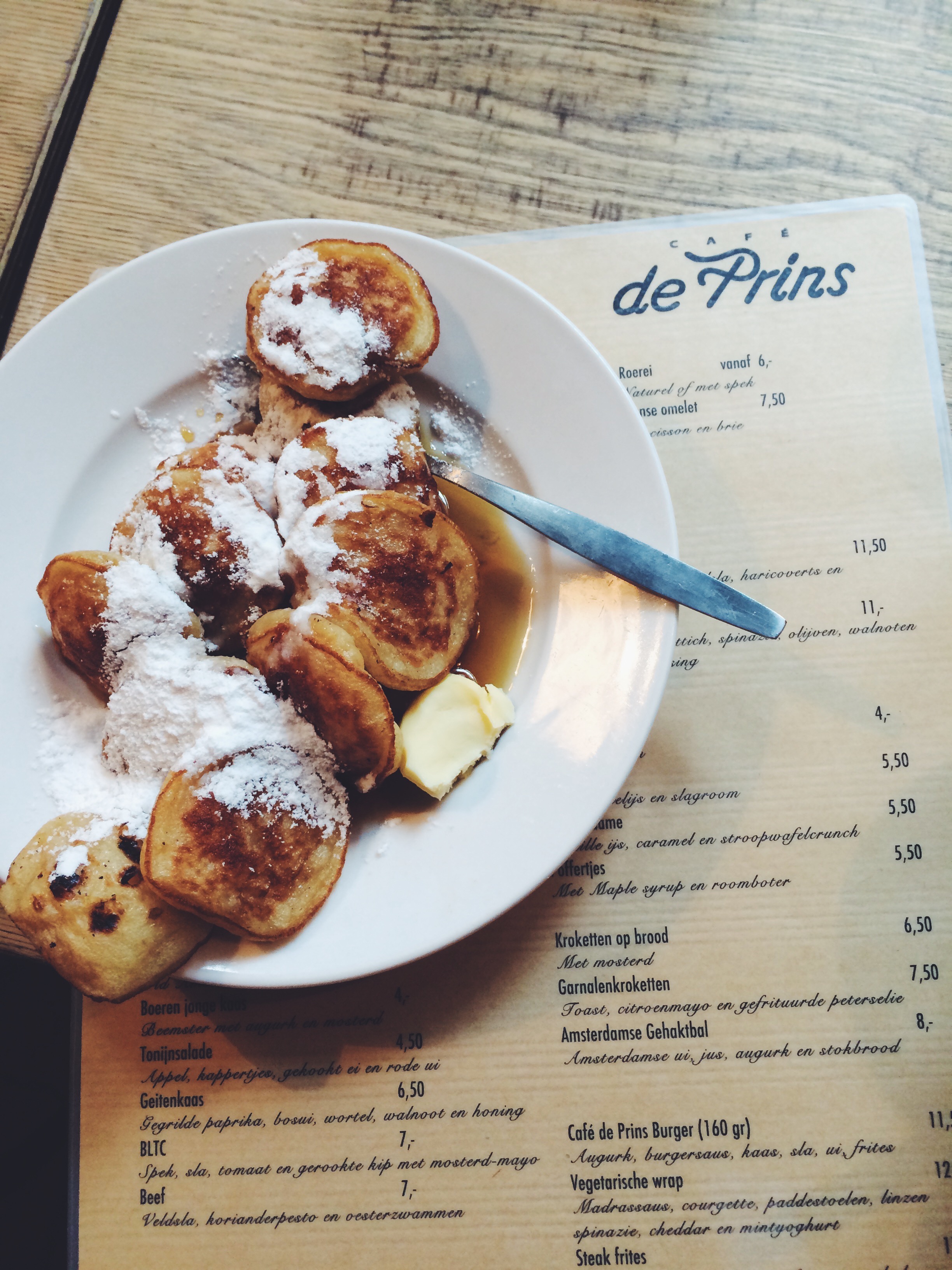 Going along with pancakes, be sure to try the Dutch specialty of these mini, puffier pancakes
covered with powdered sugar, lots of butter, and maple syrup. Along with these, you can
also try the Dutch version of doughnuts: oliebollen, which translates to oil balls, are deep-
fried mini Dutch doughnuts covered in powdered sugar… and they are dangerously good. 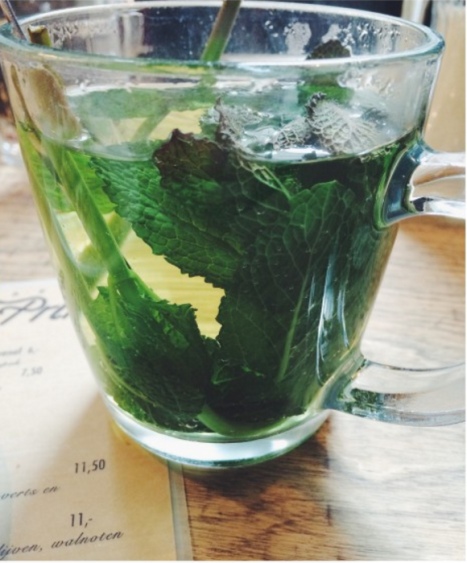 You will quickly notice this in every Amsterdam café: fresh mint tea in glass jars,
with actual mint (stems and all) in the hot water. This must have come from an exotic trading
route back in the day, but it stuck in Amsterdam and it’s a definite refreshing and healthy order
to stop into a cafe for. It’s not only beautiful, but delicious as well. Add a bit of honey or have it plain!
*There are also a lot of other internationally influenced cuisines to try here in Amsterdam..
especially Indonesian due to the Dutch occupation there. Try Restaurant Blauw for a taste of Indonesia. 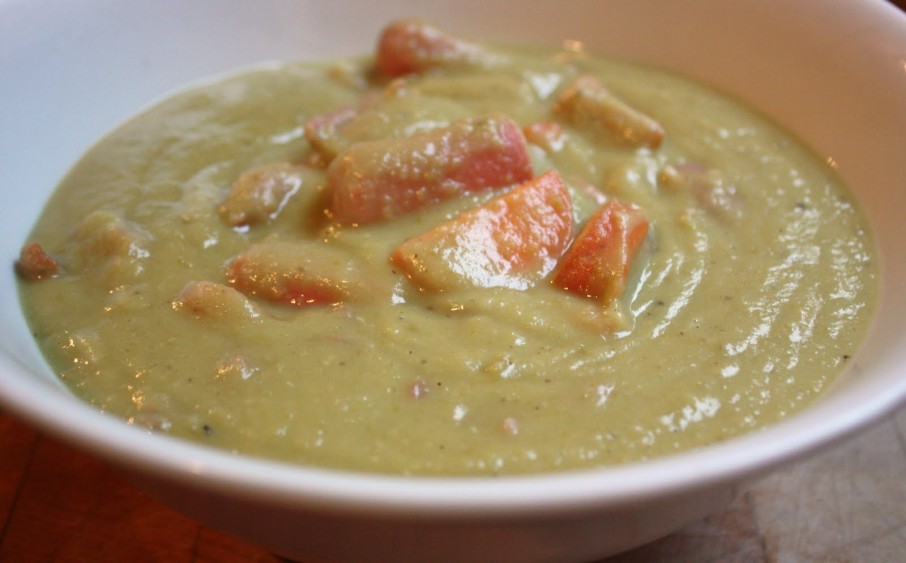 image via
Called erwtensoep in Dutch, I only recently picked up on locals loving this thick pea soup.
I haven’t tried it myself yet, but it is a hearty staple that you can find in almost any café.
It’s more filling than it sounds, with dried split green peas, lots of other vegetables, and
usually some smoked sausage. Eat it with some delicious Dutch bread on a drizzly day
and feel like a local! (Another stew-type dish you can try is the classic stamppot). ­ 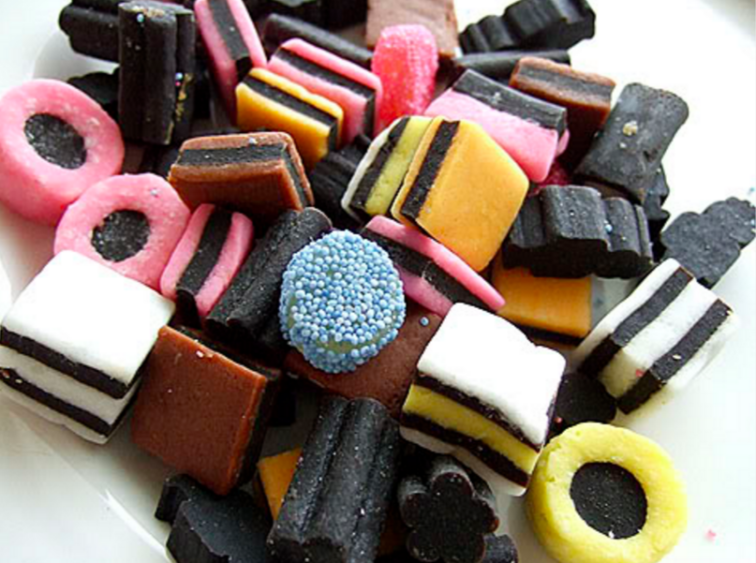 {image via}
Not my favorite…but worth mentioning and trying here, since the Dutch have the
highest per capita consumption of licorice in the world. Haha! How about that claim
to fame? We’re not talking about red vines here…this licorice is old school (and some is
even salty flavored…called salmiak) so if you go into a grocery store, choose wisely. It is
called drop in Dutch and there are so many varieties. The Dutch also love putting
sprinkles on everything, so you can find a lot of sprinkles varieties next to it…haha!
One of the famous candy shops to stop into for it is Het Oud-Hollandsch Snoepwinkeltje . 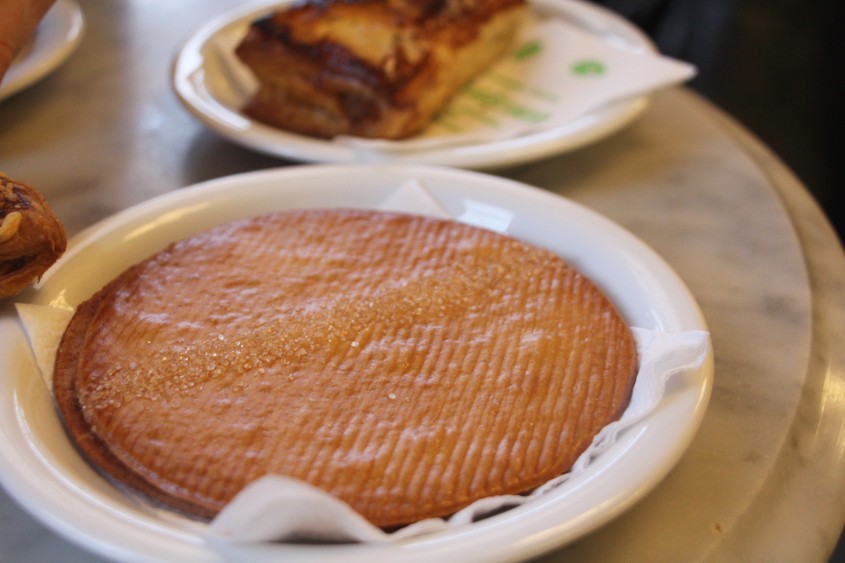 Last but NOT least, stroopwafels! These are arguably the most recognizably Dutch treat,
and what we have waiting for every visitor. (We’ll also be taking a suitcase of them home for
friends, and I need to learn to make them once we live back in the states :) They are like a big
chewy waffle cookie with a caramelly filling that is divine. I recommend trying a warm fresh one
from a street cart first, then stock up on some packaged ones to take home – you’ll want them!
Dip them into a hot chocolate or other warm drink…, and they fit perfectly over your mug!

…and, a few more photos from my food tour with Eating Amsterdam: 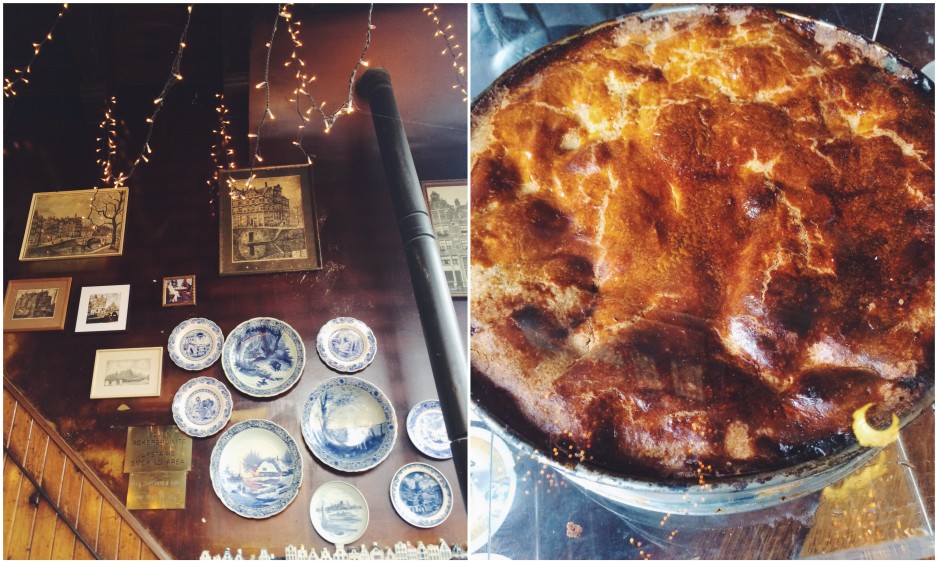 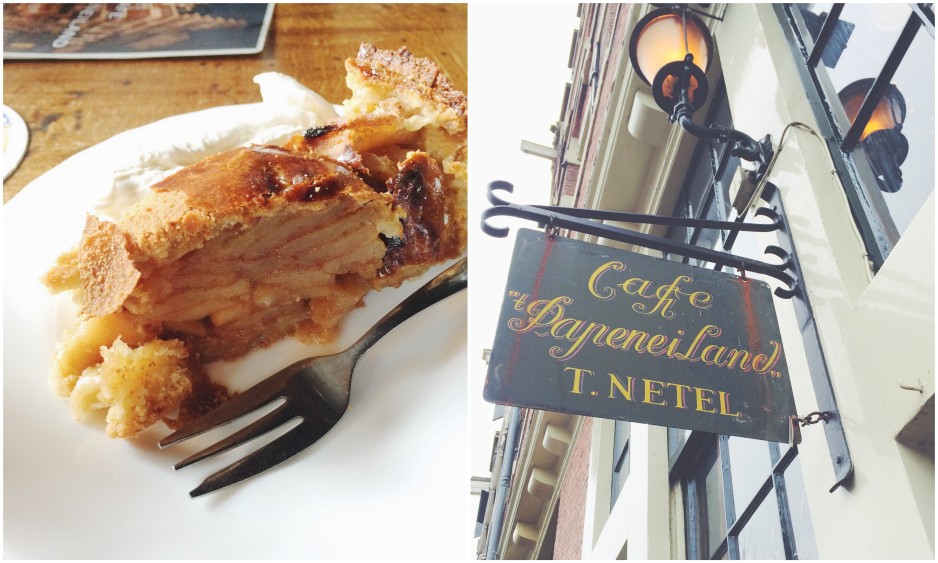 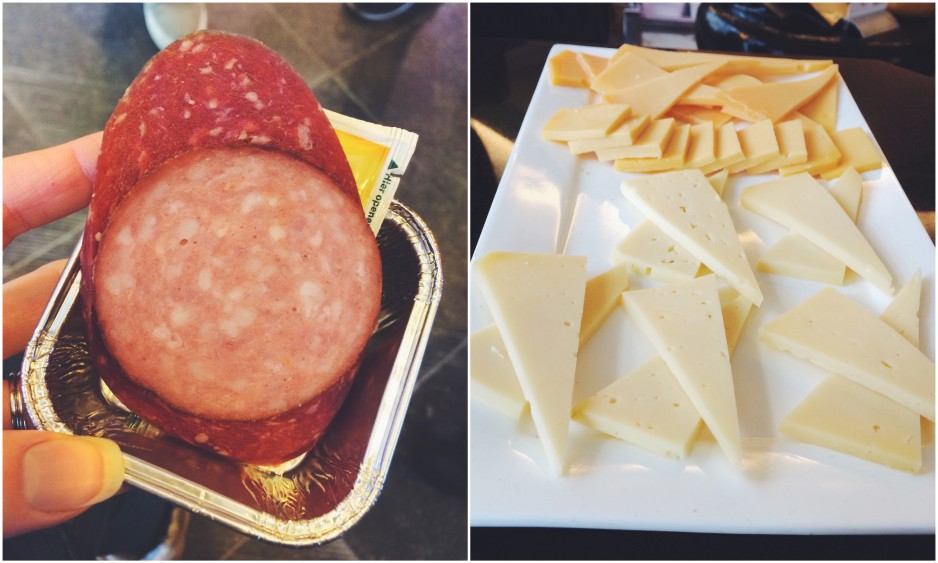 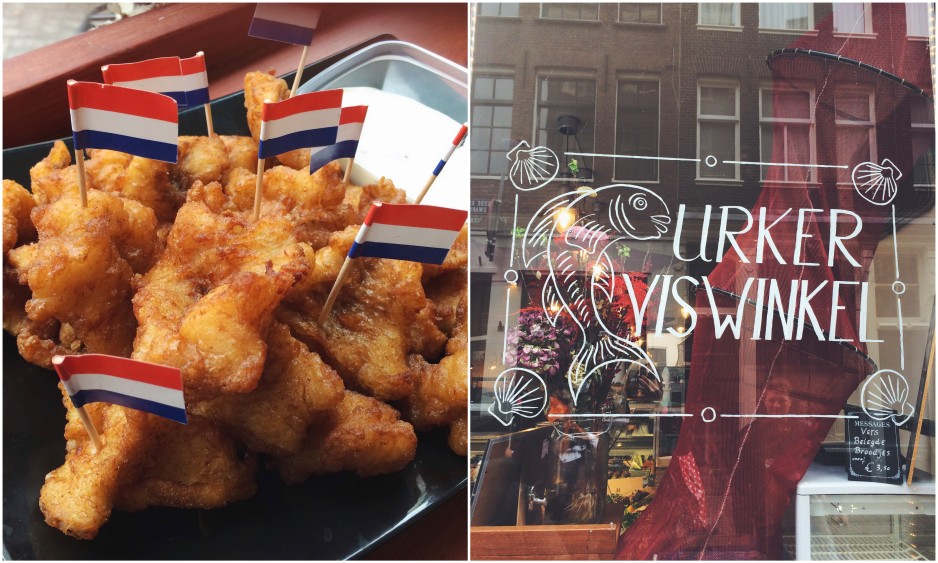 After the pie, this fried fish was the highlight for me. Urker Viswinkel has the
very freshest fish, and this was so flavorful + lightly battered. AMAZING.
(It’s also where the tour stopped for the herring ;) 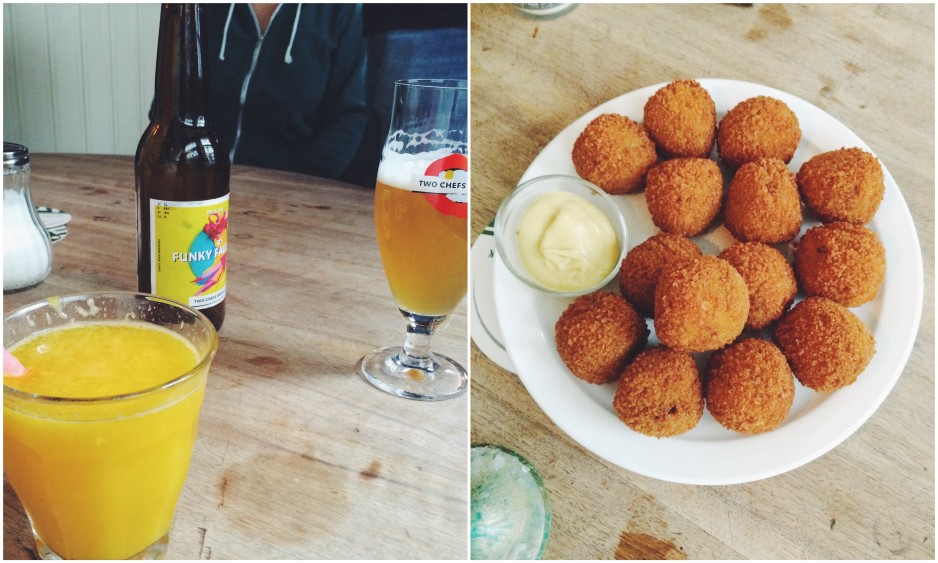 I hope when you visit Amsterdam, you TASTE it too!

Author: emi
Filed Under: amsterdam, europe, food, food tour, holland, what we eat
copenhagen (by accident!)
5 British Dishes You Have to Try at Least Once

10 thoughts on “10 Dutch foods to try in Amsterdam”