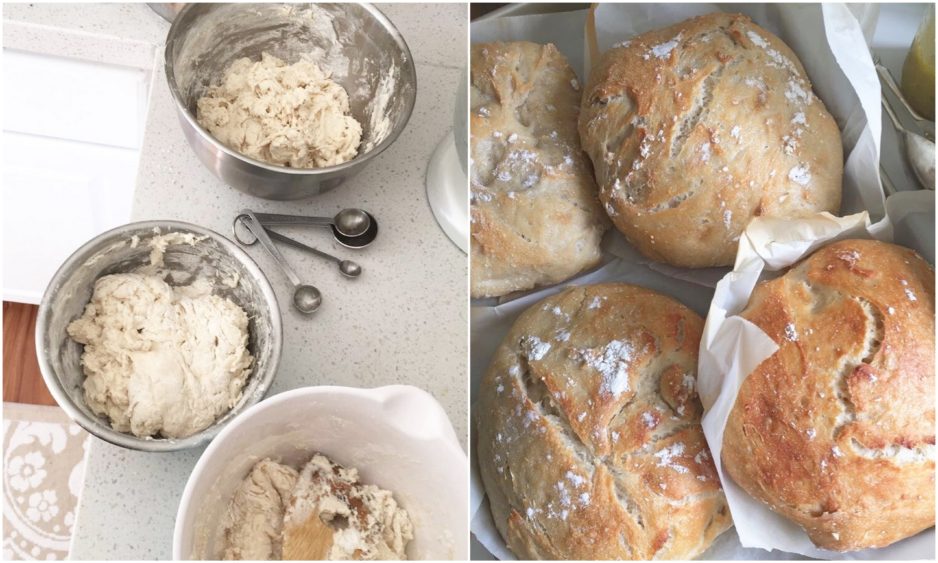 I’m finally posting this here because it’s one of those recipes
I have memorized. We make it that much, and it’s also that simple!

My friend made it for us once when we went over for Sunday dinner, and we
couldn’t believe she had made it! It was so gorgeous and delicious. She let me
in on the secret of how easy it was, and I’ve been making it ever since..for
dinner parties, showers, deliveries to friends, and more. It is always
a hit and it’s fun that it’s so easy. The only thing is you have to prep
it the night before you want it (or the morning of) so it takes planning!
The other thing you need is a good covered baking pan – preferably a
dutch oven type like La Creuset, but there are plenty of less pricey options.
Mine is from World Market and was $50…works great every time! You
can also even use a cake pan with a pot lid to cover if you really want to.

There are a few variations of this simple recipe online and on Pinterest,
but here is the one that has worked best for us! I have tried it with
half whole wheat flour but need to experiment a little more to get that
right. It’s definitely best and fluffiest with regular all-purpose white.

Now that we make it so often, I almost always flavor it. It’s delicious plain
with butter and jam, but now we do all different add-ins from savory to
sweet. I’ve listed all of those below the recipe, as well as tips for the bread. 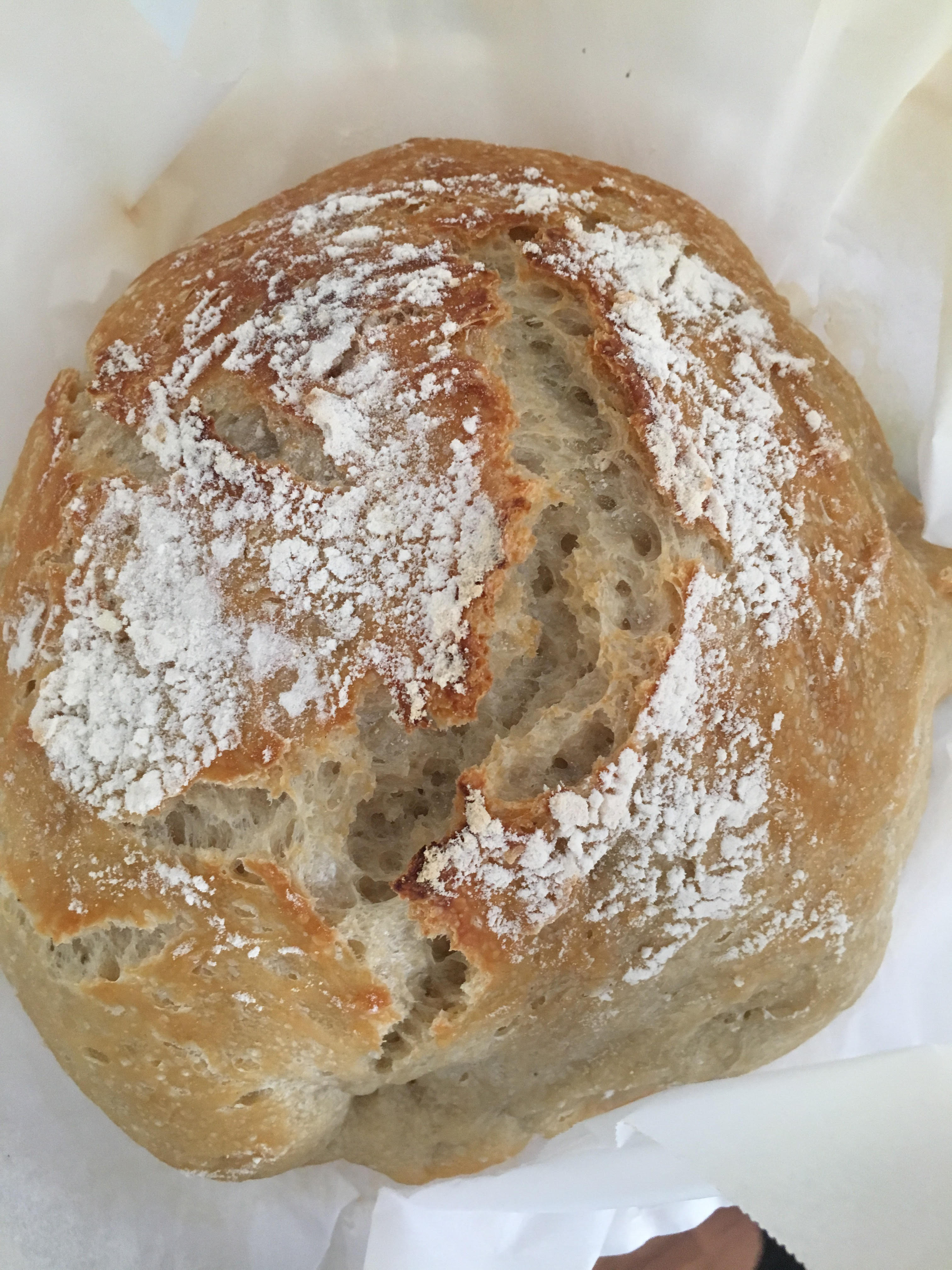 1/2 teaspoon dry yeast (active dry works best- I get the Costco bag and keep half in the fridge and half in freezer. It lasts forever!

Cookware needed: Dutch oven (Le Creuset or similar, or any large oven-safe dish/bowl with a lid)

DIRECTIONS:
In a large bowl, stir together the flour, salt and yeast. Then sir in water a half cup at a time using a wooden spoon until the mixture forms a shaggy but cohesive dough. Don’t over-work the dough. You’ll want to — it’s tempting to knead and shape it, but don’t ! The less you “work” it, the more soft, fluffy air pockets will form. So just mix until combined, and leave it.

Cover the bowl tightly with plastic wrap and let dough sit on the counter at room temperature for anywhere between 8-24 hours. Dough will bubble up and rise. I normally prep it at 9 or 10 at night and bake it at 4 or 5 PM the next day. *You can also let it rise and then put it in the fridge to use the next day if needed*

After dough has risen, preheat oven to 450 degrees F. Place your Dutch oven, uncovered, into the preheated oven for 30 minutes.

While your Dutch oven preheats, turn dough onto some parchment paper, or a well-floured surface. With floured hands, form the dough into a ball. Cover dough loosely with plastic wrap and let rest while waiting for the Dutch oven to heat up in the oven. I prefer to put it onto floured parchment paper, because then you can just pick up the parchment paper and put it into the pot to cook that way – less mess!

After the 30 minutes are up, carefully remove Dutch oven. With floured hands, place the bread dough into it. (My Dutch oven is enamel coated so it won’t stick either way, but I still like having the parchment paper under the dough just to have less mess). 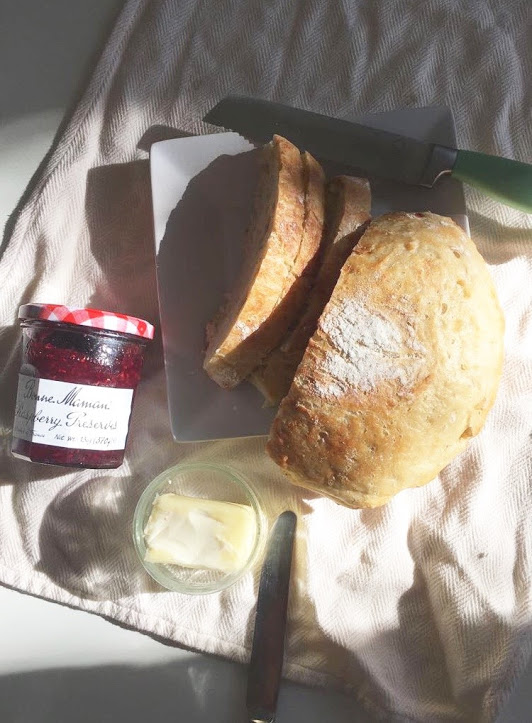 **After getting the basic loaf down, it’s fun to try some add-ins like cheese, herbs, chopped nuts, sweet things, etc.
Some fun combos to try:

Note: Depending what you are adding, you can decide when to add the mix in. Usually I add things in at the start before mixing with water, when I want them all evenly mixed through the dough… then add water and let it all rise. However, you can also let it rise and then put cheese or pesto etc right onto the top and fold the bread over into the pan, so the filling is all in the middle of the bread and won’t burn on the outside. It’s kind of an experiment, and you’ll get it down quickly with your favorite flavorings! Either way, just make sure you don’t over-mix this dough – it’s what makes it so light and fluffy!