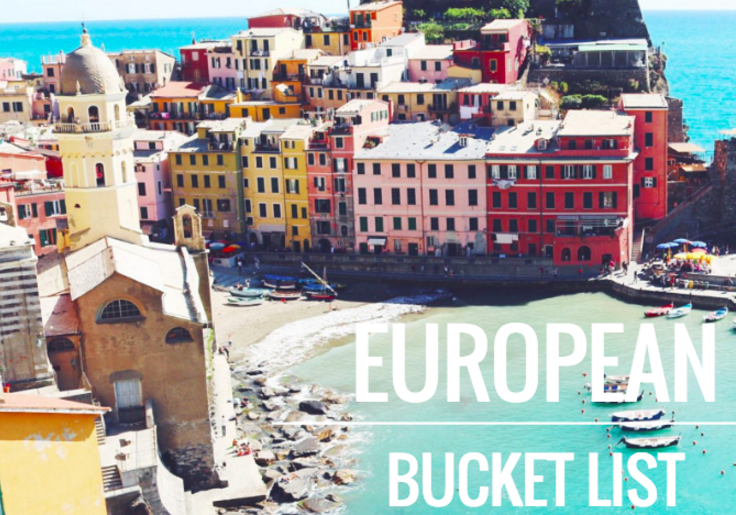 If you remember our big BAY AREA Bucket List you know I am all about compiling big lists of places and things that I want to experience…and Europe is no exception! I’ve had this running list for years, but really started knocking things out when we lived in Europe over the past year. So, without further ado…here is our
EUROPEAN BUCKET LIST!
My friend at Overseas Escape also recently posted one here which made me smile (great minds think alike ;),
so I’m sure between the two these are pretty complete! There will always be more, but here is our list of incredible things to do in Europe (some completed and some yet-to-be) ::

Go canyoning in the Swiss Alps ✓

Visit a sauna in Finland ✓

Eat a margherita pizza at the original birthplace in Naples, Italy ✓

See the Eiffel Tower sparkle from the Seine ✓

Stay overnight in a castle

Attend the Grand Opera in Vienna

Ride the roller coaster at the world’s oldest amusement park: Tivoli in Copenhagen

Go searching for the Loch Ness Monster in Scotland ✓✓

Have your portrait painted at Montmartre in paris (just don’t get ripped off ;) ✓

Listen to the fiddlers at Temple Bar in Dublin ✓✓

Connect Scandinavia to the Baltics on a ship ✓

Drive a dog sled in Scandinavia

Sit at a sidewalk café in Paris for an entire afternoon ✓

Soak with locals in the thermal baths in Budapest ✓

Visit the Sintra Castle in Portugal

Ride the Flåm railway in Norway ✓

River cruise on the Danube

Listen to a bagpiper in Edinburgh ✓

Running of the bulls in Pampalona (one I’m not sure I’m quite brave enough for..!)

Have a macaron taste test at Ladurée vs. Pierre Hermé ✓

Experience the “Chunnel” connecting the UK and France ✓

See the Cliffs of Dover ✓

Stroll the Charles Bridge in Prague ✓

Stay at an ice hotel in Sweden’s Jukkasjärvi village

Bike through the chateaus of the Loire Valley ✓

Hike from refuge to refuge in the Dolomites ✓

See the Matterhorn in Zermatt on a clear day…bonus for hiking or skiing it! ✓

Lay out on the Paris “plages” beaches during the summer ✓

Have a beach day in San Sebastian, Spain ✓

Eat a huge bratwurst in Germany ✓

Picnic on a rowboat in Hallstatt ✓

See a play at Shakespeare’s Globe ✓

Drive through the Scottish Highlands (and try haggis if you’re brave!) ✓

Chocolate-making class at Lindt in Zurich ✓

Ride the swings at the Tuileries Garden in Paris ✓

“Punt” on the River Cam in Cambridge ✓

Rent a vespa in Greece ✓

Lay out on the hot pebble beaches of Nice, France ✓

Stay on a houseboat in Amsterdam ✓

Picnic on the Champ des Mars ✓

Ride the London Eye at sunset ✓

See the ancient ruins of Greece ✓

Shop at Harrod’s and Fortnum & Mason ✓

Take a tram to a summit in the Alps ✓

Walk the planks at Plitvice Lakes National Park in Croatia ✓

Buy fresh flowers and bread at a European market ✓

Catch a scenic train through the countryside ✓

Ice skate on Lake Mälaren in Stockholm during the winter

Ride a yellow tram in Lisbon through the Alfama neighborhood ✓

Eat at a pancake house in Holland ✓

Get a creative photo at Stonehenge ✓

Stroll or jog through Luxembourg Gardens ✓

See a local dive off the beautiful Stari Most bridge in Mostar, Bosnia ✓

Eat a fresh, warm croissant for breakfast in Paris ✓

Do the Swiss Chocolate Train ✓

Tea time at The Orangerie in London’s Kensington Gardens ✓

Buy something leather in Florence

Visit the gruyère cheese factory in Gruyères, Switzerland..and have some fondue, of course ✓

St. Moritz in the winter ✓

Cross the Strait of Gibraltar to see Morocco

Watch the famous sunset from a sailboat in Santorini ✓

Take a tiny plane to the Faroe Islands ✓

Boat on Lake Bled in Slovenia ✓

HP fans: try your best to make it through the wall to platform 9 3/4 in London ✓

Watch the yachts come into harbor in Kotor, Montenegro ✓

Take a day tour of the Murano, Burano, and Torcello islands in the Venetian Lagoon ✓

Boat or kayak through Stockholm’s archipelago ✓

Fly a budget airline with a tiny backpack as luggage ✓

Take a stopover in Iceland to swim in the Blue Lagoon ✓

So many more to add through our lives, but those are some major fun ones we’ve done
and want to do…what is on YOUR Euro bucket list? Let’s get checking! Pin here: