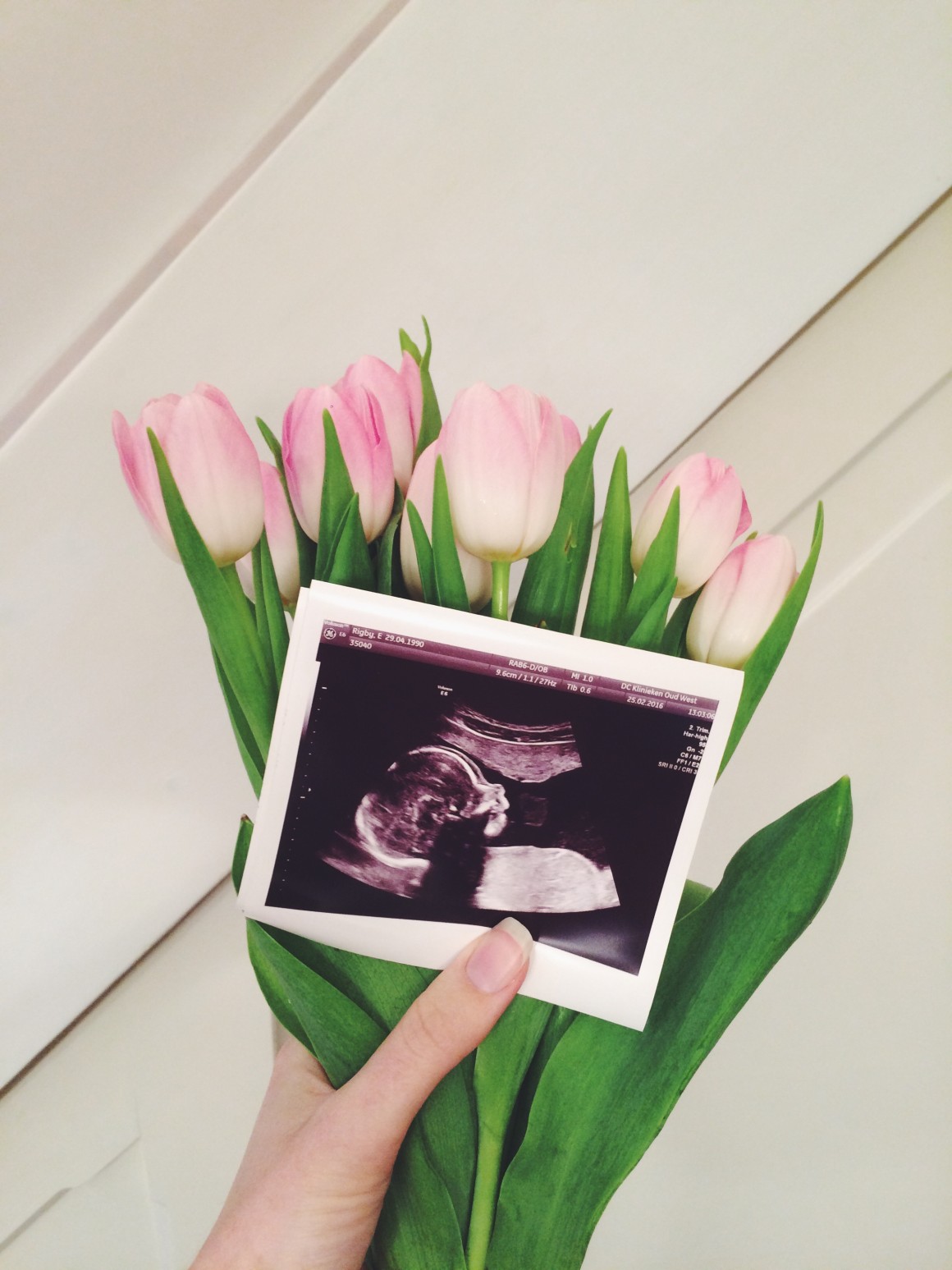 we’ve been planning our best adventure yet!

of all the experiences & new things chase and i have shared together,
we’re officially embarking on the biggest and best yet! this one takes lots
of planning, months of waiting (somewhere around 9 to be exact…), it’s
pretty physically taxing + tiring, expensive, and a one-way ticket
to a place that is definitely unlike anywhere we’ve been before :: 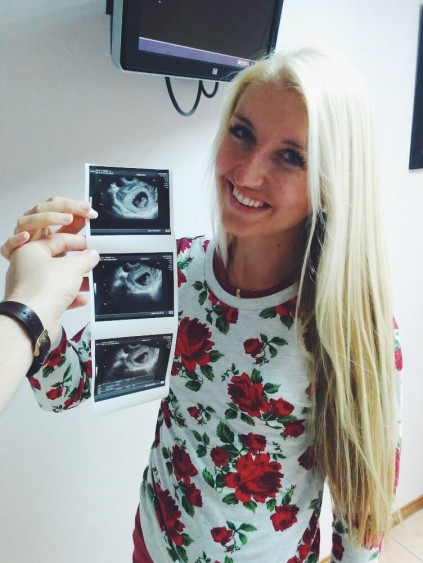 how crazy is that?! i am 18 weeks along and we’re due in july 2016!
it hasn’t quite felt real since we’ve been all over the place this first half, but
we are so excited and can’t believe it. we weren’t really thinking about this, but
toward the end of our backpacking through europe we suddenly both started to get
so excited about the next phase of life. we’ve had almost four amazing years of marriage
filled with more than i could ever have wished for, and i think all of the traveling and
time abroad over here in europe helped us get it out of our system and start wanting
what’s next! we will always travel and have adventures, but we are excited to slow down
& start a family right now. (i also think i saw a lot of darling blonde little scandinavian
children through europe and kept pointing and telling chase “i want one!” hehe) it was a
good surprise to start talking more and getting excited about it! once we got to london
in the fall and felt some type of normalcy somewhere, we decided to just be open to it.
we were both surprised to be feeling like this, but it felt inexplicably right to us. 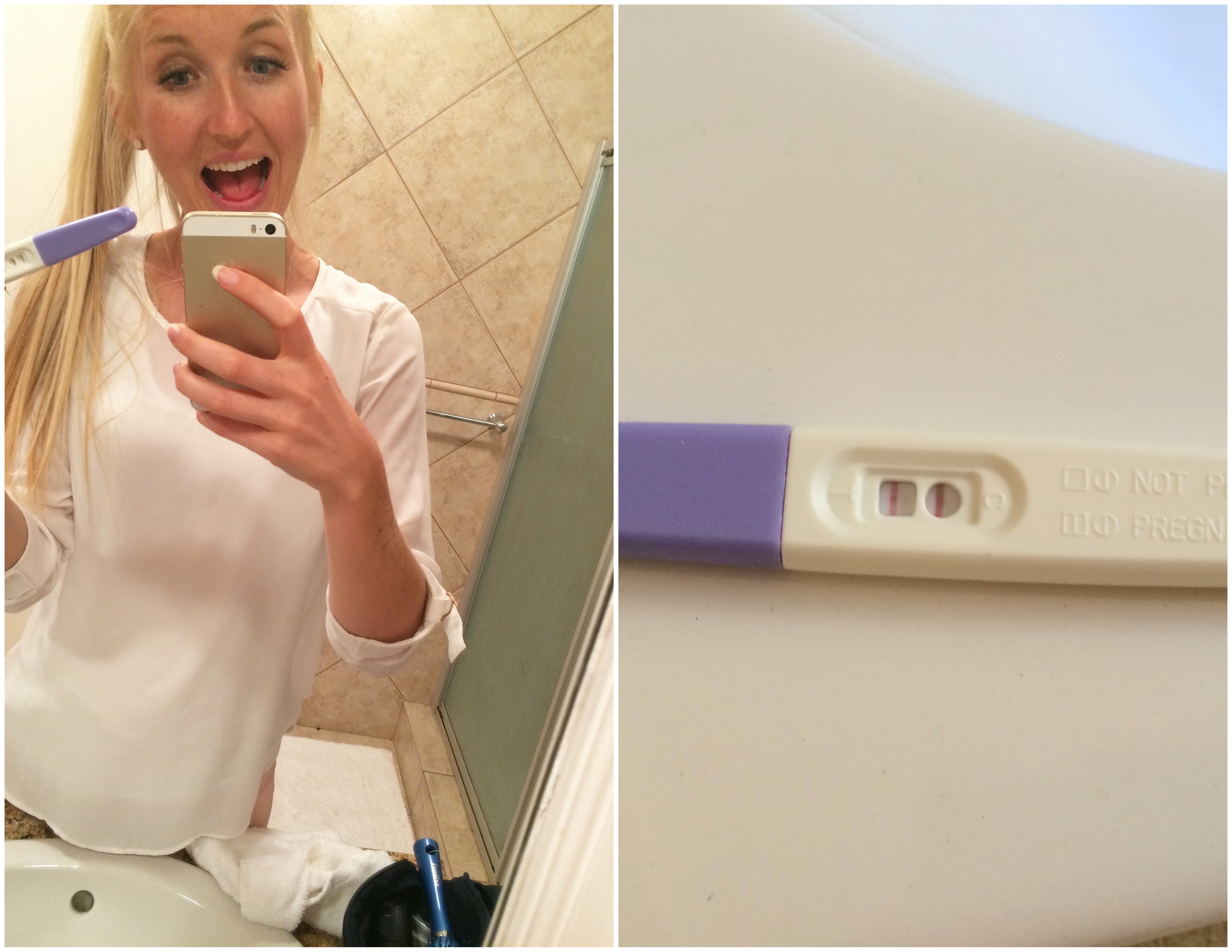 the next month i got to south africa to visit my parents, and soon after the nausea
hit full force. chase wasn’t in SA quite yet, but i knew i had to be pregnant because
i never ever get sick to my stomach and suddenly it was so bad! i also had lots of other
symptoms and realized i was already at about six weeks along. so i kept it a secret, took
an actual test the morning of thanksgiving when chase flew in, and told him in cape town
the next day just the two of us! then we were able to tell my parents in person in south africa
since we were spending the entire month with them over the holidays. that was so special
since they will be living in SA when the babe is born. they also still got to be part of the
pregnancy by helping me through my insane nausea + sickness, getting me treats,
(thanks for the smoothies, grapes, & sour skittles, dad! :) and most importantly…
they were able to come to our very first doctor appointment & sonogram with us!
it was such a huge bonus to be able to be with them for this exciting time. there’s
nothing like being with your mom when you’re sick / going through such a big thing! 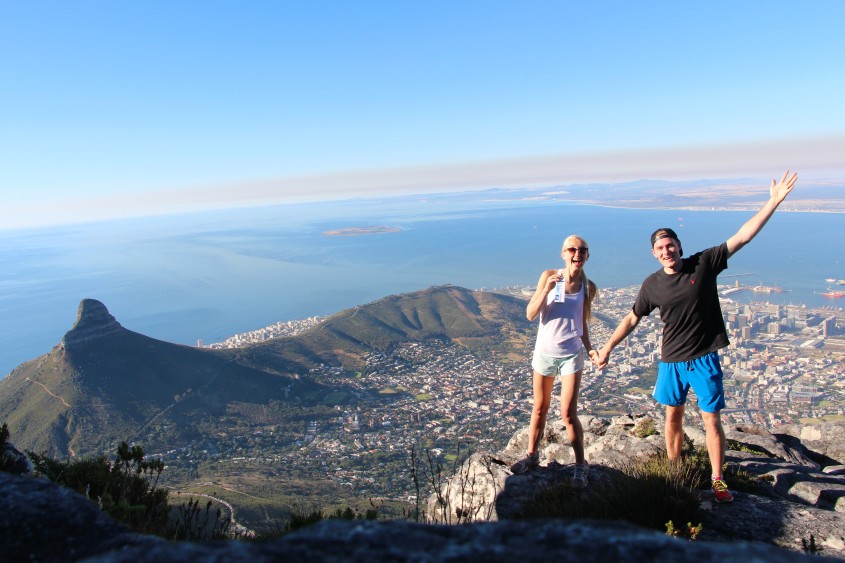 i was proud of myself for keeping the secret for two weeks until i was reunited with
chase, and i could not decide how to tell him! we were flying to cape town just the two
of us for a few days, and i was planning to tell him on the plane by having the flight
attendant hand him the pregnancy test when she brought drinks by. we’ve spent so
much time on planes together, it seemed like a fun place to tell him. that didn’t quite
work out, because when we sat down on the flight it just didn’t feel like the place to do it.
a) we were crammed in our row with a stranger, b) it would be weird to celebrate / probably
cry in front of the whole plane, and c) there was literally a SCREAMING baby behind us the
whole flight. haha! i took it as a sign to save the special moment for somewhere in cape town.
right when we landed we headed up to hike table mountain on a gorgeous clear evening.
we were up on top taking in all of the views, and i set the positive pregnancy test on a
little ledge and then asked chase to go out there to take a photo. he walked out and glanced
down to see a pregnancy test that said “congrats dad!” on it, and it was the sweetest moment.
i have it on film that i will probably share sometime, but he may or may not have cried ;) 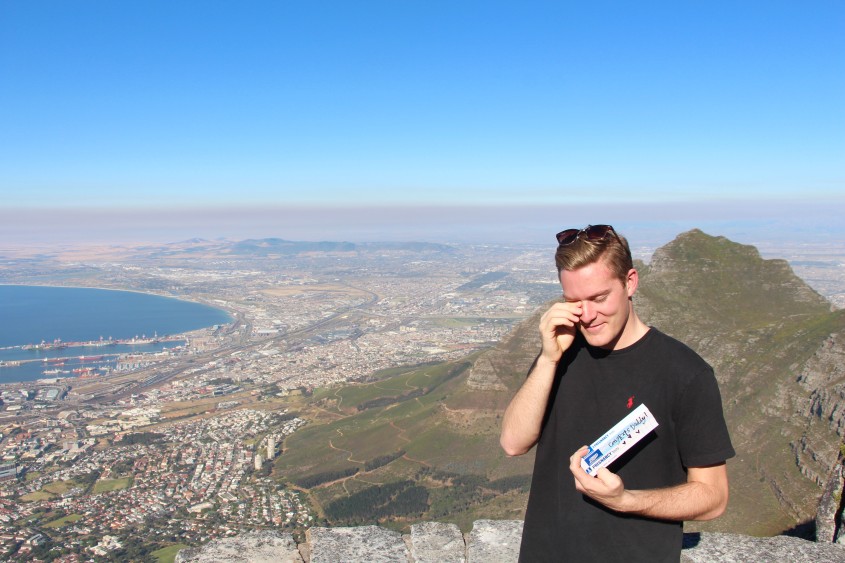 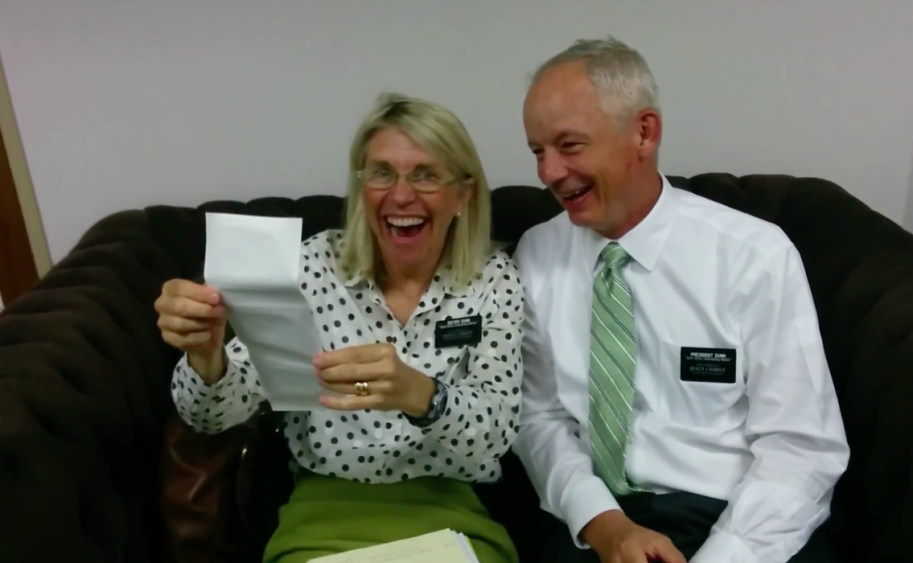 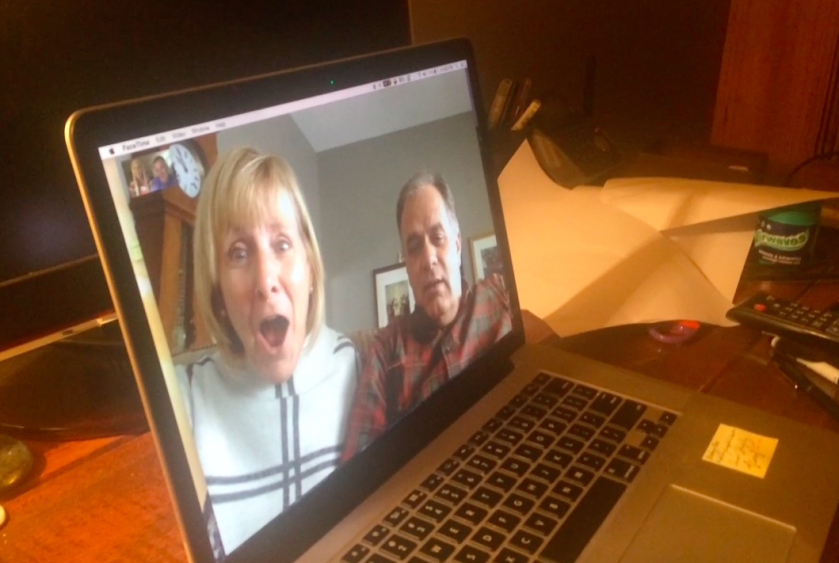 we told my parents when we came back to johannesburg, and we were able to tell chase’s
parents on christmas over facetime. we kept it just between our parents for the next month
until the end of january when we told our siblings, family and friends over facetime since
we are so far away right now! it’s been so special to share and feel so much love for the
best thing possible. after being really sick and all alone here in holland, i didn’t realize
how amazing it would feel to share our news with loved ones from home! we loved having
some time when the news was just ours, but i’ve been so excited to announce this now!
i filmed most of our loved ones who we told, (some were on the phone) so i’ll definitely
have to put it all together for our baby to watch one day…but here are some screenshots:
(missing abby and brynn and lots of others that were phone calls…but love these faces!!) 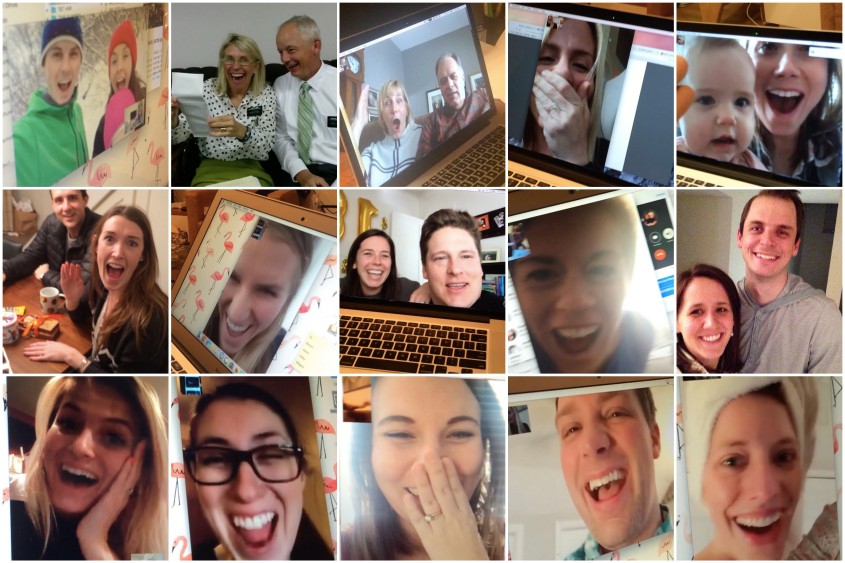 i’ve definitely been humbled by this whole experience so far. pregnancy is a time when
we truly have no control over our own body. it’s overwhelming but also so amazing to
experience. there have been some hard moments when i’ve been throwing up, crying,
tired, and overwhelmed…but it’s normal and i know the payday is so worth it!! i also
think the physical symptoms happen to slow us down and prepare us for the emotional
transition that is coming. feeling like i have no control over the changes /sickness happening
to my body is probably a small fraction of the change that is coming in our life with a little one!
i think it’s pretty amazing that our body knows how to slow us down and prepare us in every way.
(or maybe this is just me looking at the bright side of feeling so terrible for months! ;) 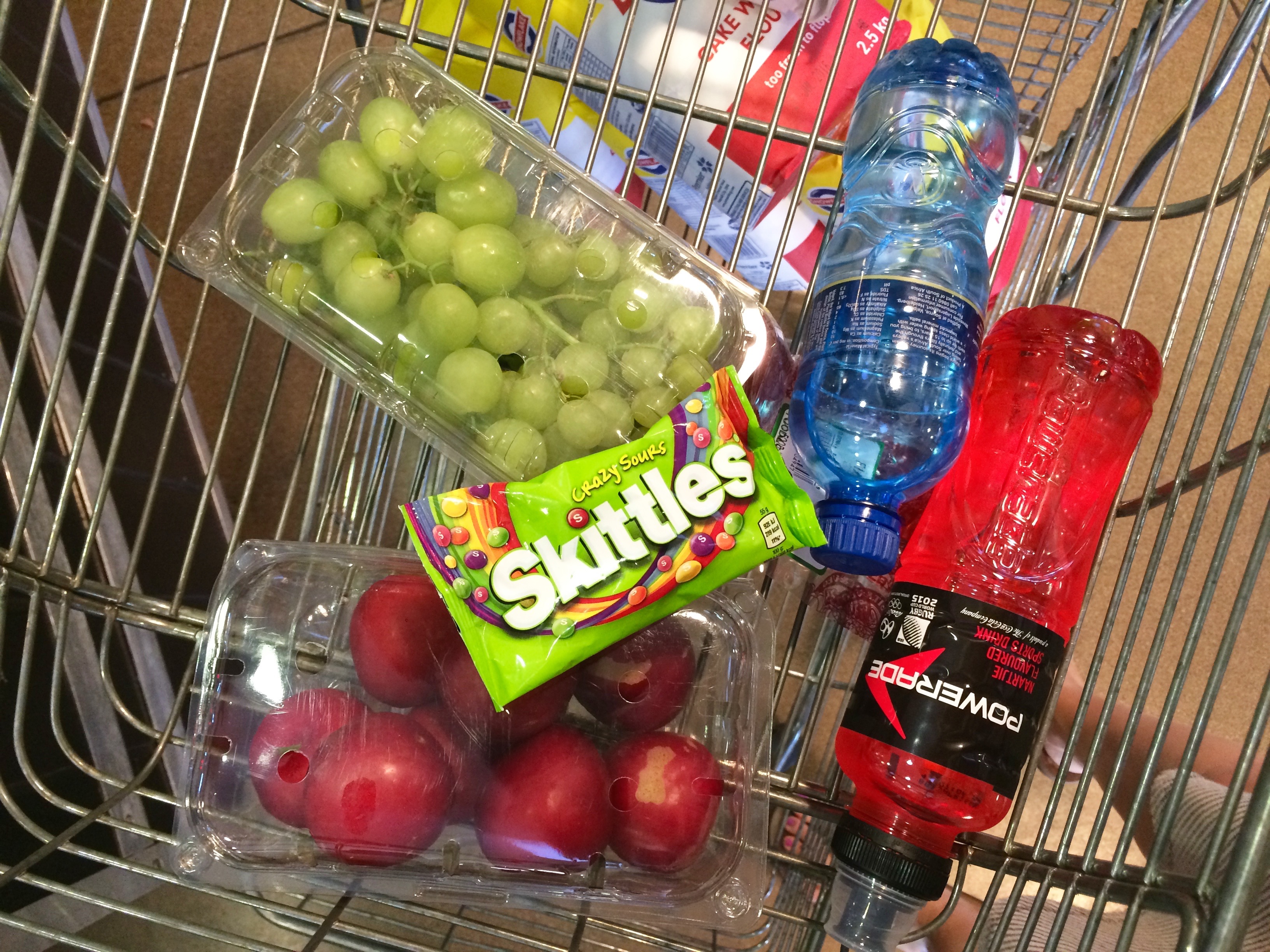 a few little details i’ve written down since finding out in november..
i’ve been craving PINA COLADAS, cherry yogurt, bagels and cream cheese, and sour candy. i’m
always wanting fresh mexican food, but that’s probably from being outside the US for 8 months!
i also have been dying for good old mac & cheese, (specifically annie’s white shells) which is impossible to
find in amsterdam, but the cutest friends ever just brought a suitcase full and stocked us up! :)

highlights have been… talking to chase about our little one, telling our loved ones the news,
and our 12 week ultrasound in amsterdam. it was the best thing ever. i could not stop smiling!
it was actually the day of the horrible break-in at our new apartment, but later that day we went
and got to see a healthy baby on the ultrasound… and that’s why the robbery was in perspective. i
couldn’t be too upset because we had seen our darling BABY the same day! and it waved to us!! 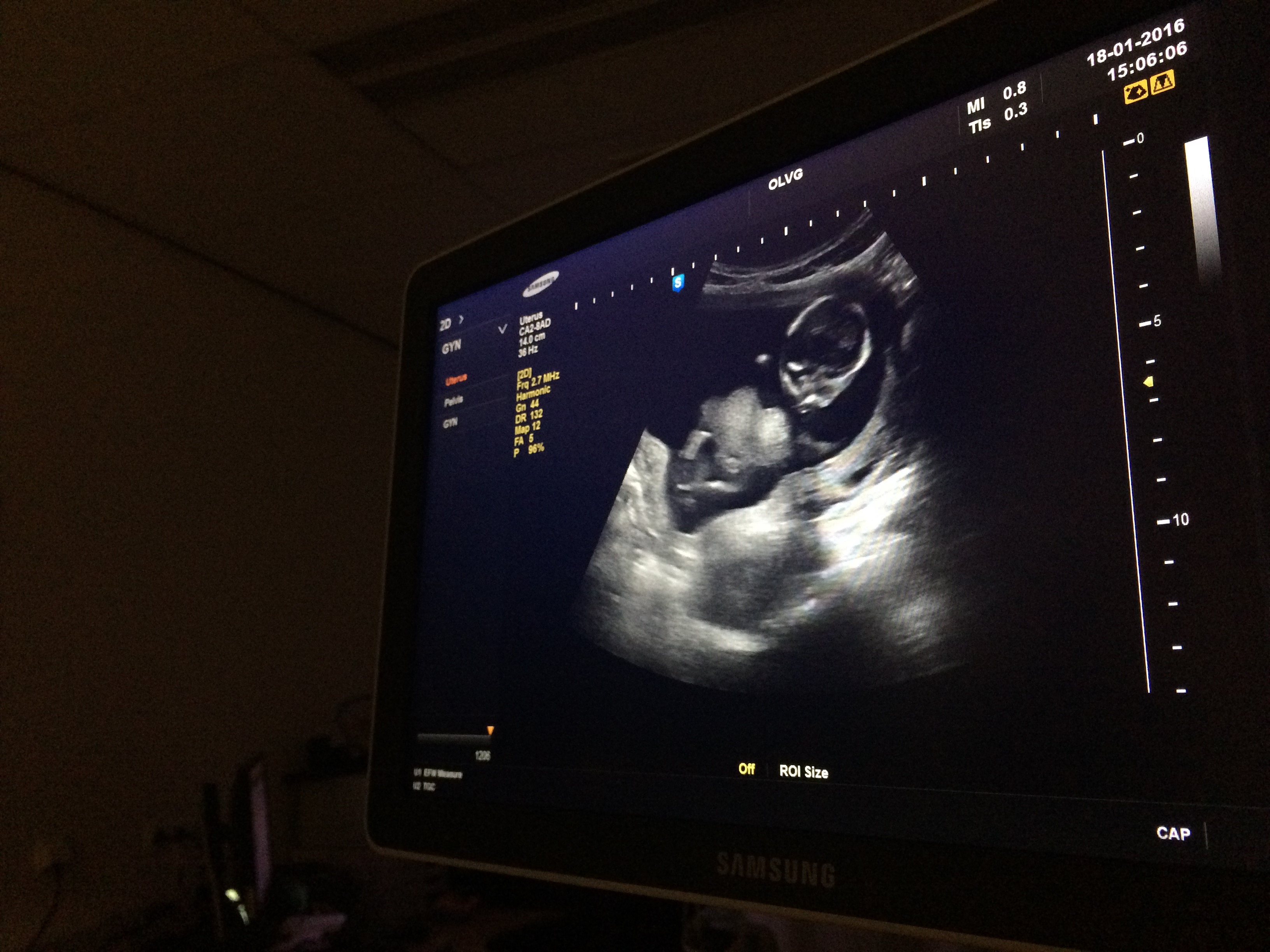 so now i’m in the second trimester, and have felt better… but it still comes and goes now.
in general, i’ve been more sick than i expected but still able to work, and enjoy amsterdam!
we also have some fun european getaways planned these next months to a few places we
haven’t hit together, so i’m hoping to keep feeling better..but still planning to take it easy. 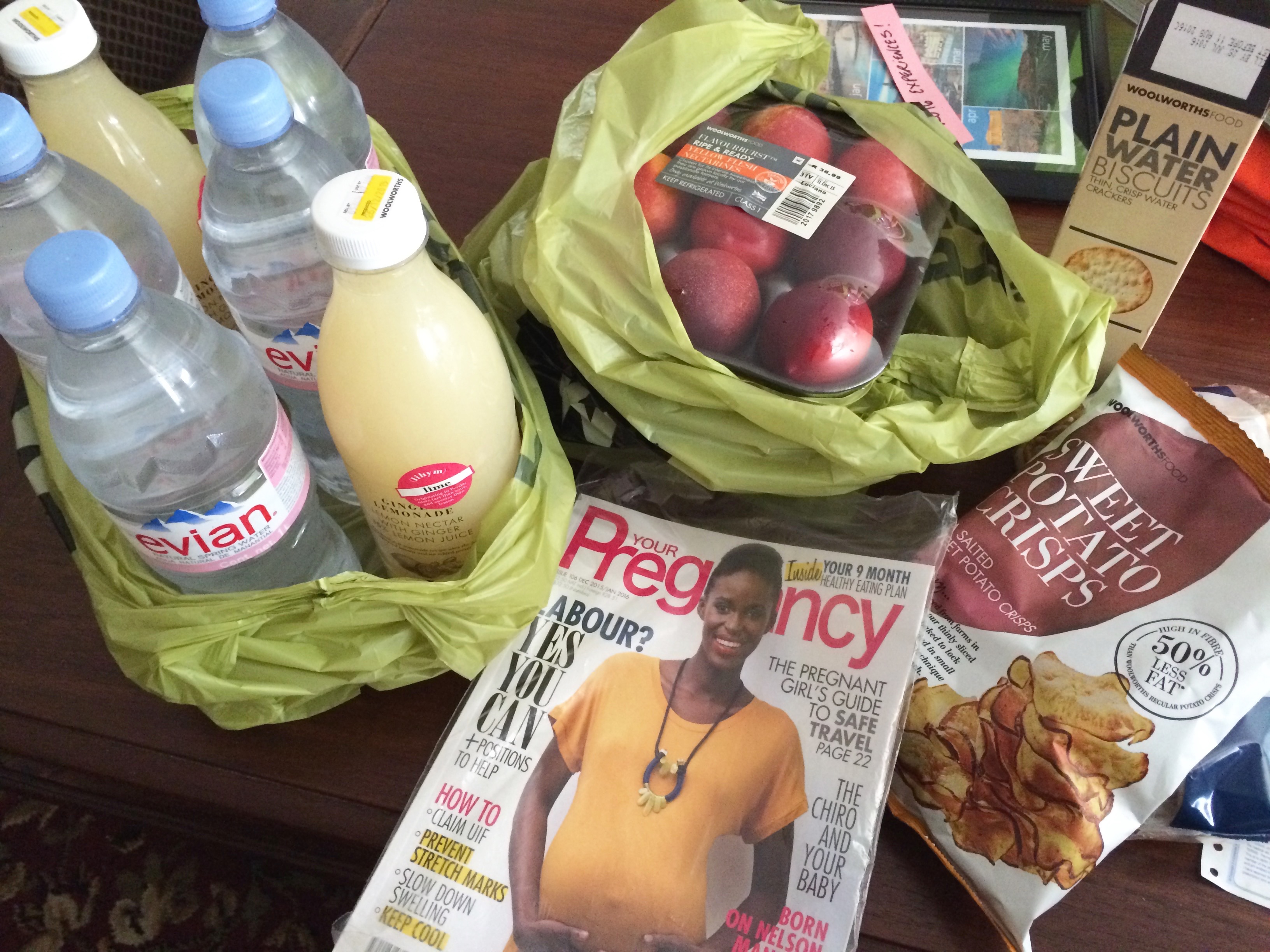 as for where the baby will be born, we will see! i am such a planner and i never thought
i’d be so flexible and fine with something like this, but we are still deciding our plans.
chase’s assignment with google here in europe is set to end in may (with options to extend),
so we’ve been deciding if we want to stay over here or come back to california in time to
have the baby. it has been weighing on us (mostly me) and we’ve talked about so many
pros and cons, made huge charts/lists about all of the factors, etc…but at the end of the
day we are feeling the best about coming back to the states in may. there are some really
exciting things in the works with chase’s job and some options for us, so i’ll update when we
know! we have loved europe, but if we go home before the baby we will have spent a year over
here and i don’t know how it could have been better. plus, if we commit to the job here it
will mean a few more years abroad, and i think things will feel different with a little one.
bonus, the actual job chase is looking at taking with google back in CA is a dream job for him!
he will also have only 6 months of his MBA left and he can finish from anywhere… so
that’s nice and partly why this program worked so well for us to have options. mostly i
know that the right thing will work out, and it’s exciting to have some unknowns.
(we also haven’t found out the gender yet, but we will soon at 20 weeks!) 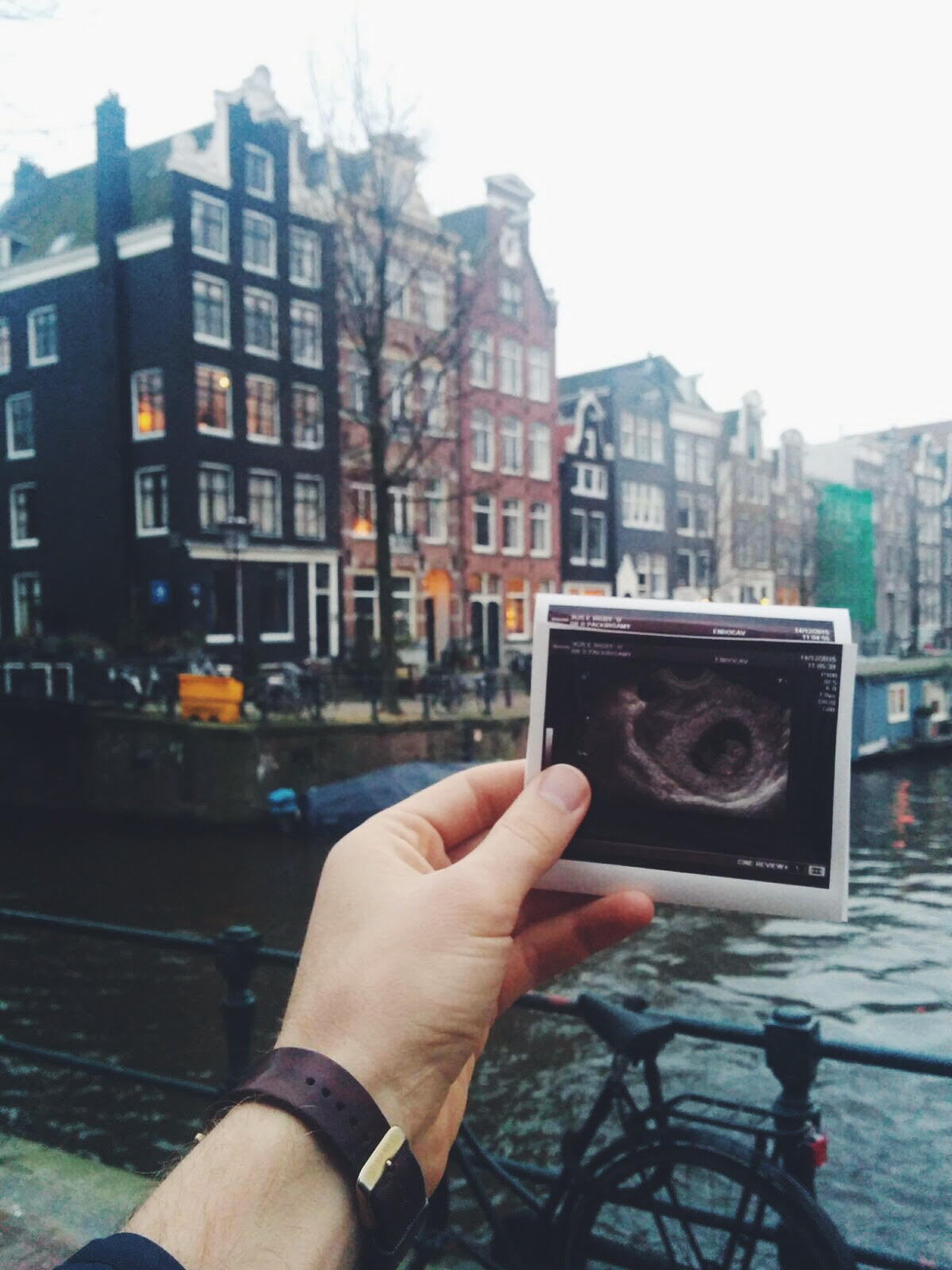 we want to be around people we love and back in a more familiar place since there will be
plenty of unfamiliar territory with having a baby! so…we will see. either way, it will be a little
international baby which started out in london, had its first appointment in south africa,
and will do most of its growing in holland (with some fun europe getaways in between)
before being born most likely back in the good old USA. for now we are just taking
it one day at a time (or one pina colada at a time for me ;) and feeling grateful for the
chance to experience all that is ahead. to all you moms out there, i already have a new
admiration & respect for you just for putting yourselves through this crazy emotional/
physical transition to bring a miracle into the world. i’m starting to get it now. 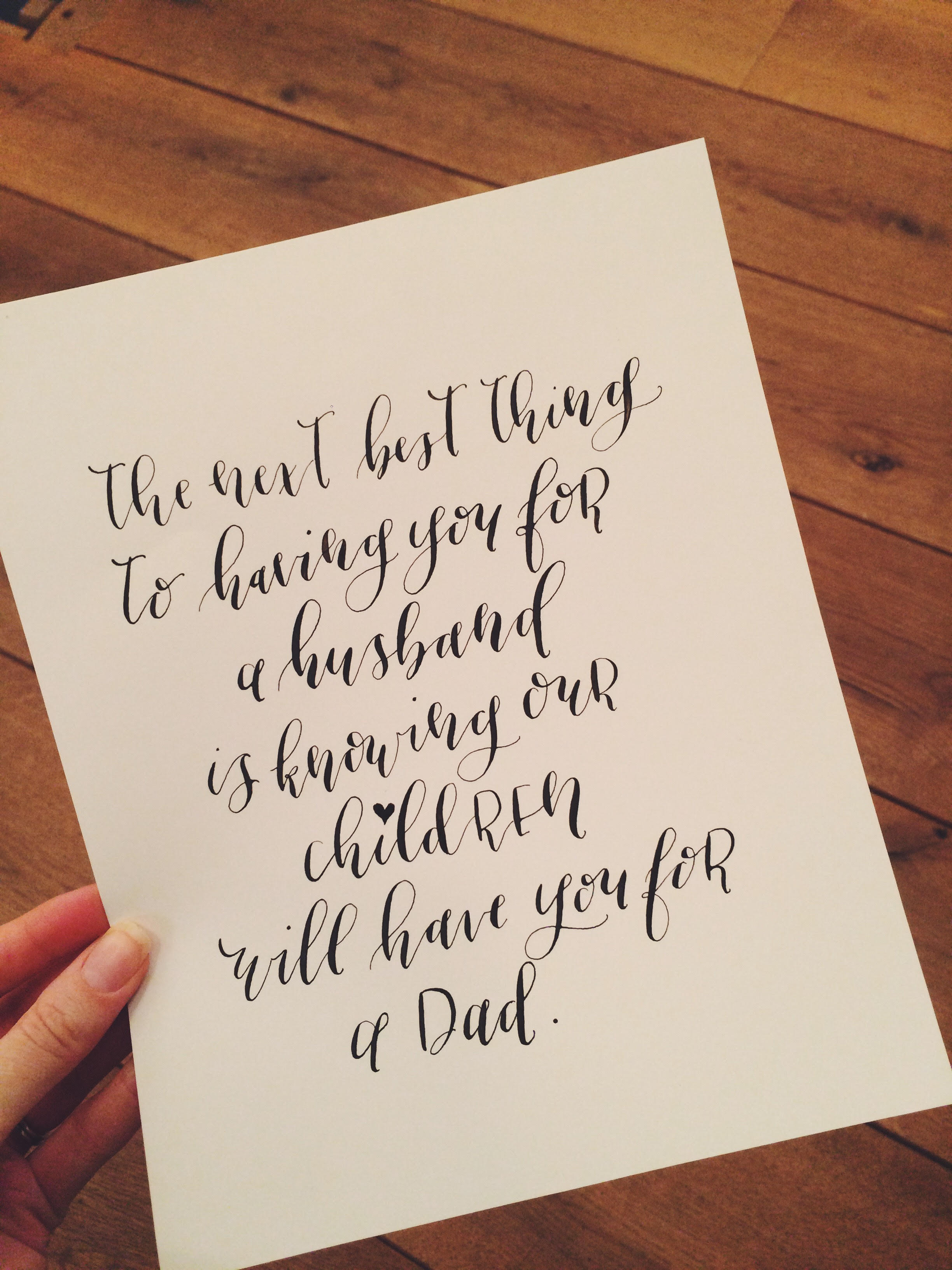 the perfect valentine for my love today ^^ this couldn’t be more true.
happy valentine’s day to all! we can’t wait for our bundle of love.

27 thoughts on “best adventure yet”