back to milano on a terrible airline :) 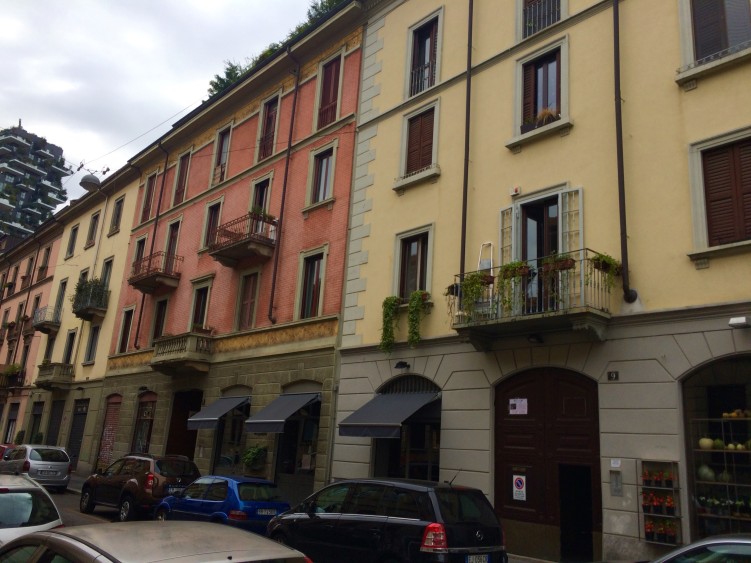 we left paris for milan bright and early on the final day of our actual travels.
milan marked the beginning of chase’s new role with google europe.
his team is spread throughout europe, but they were having a conference
in milan for a week and since we weren’t settled yet, i came along!

we flew from paris and had a layover in rome (it made the tickets so cheap)
and though slightly delayed on that flight, we got a great caprese lunch
in rome and waited to board our flight to milan. we had an 8 day airbnb
rental waiting and honestly, we were more than ready to get there, get
settled, and have chase prepare to meet his new team and start work. 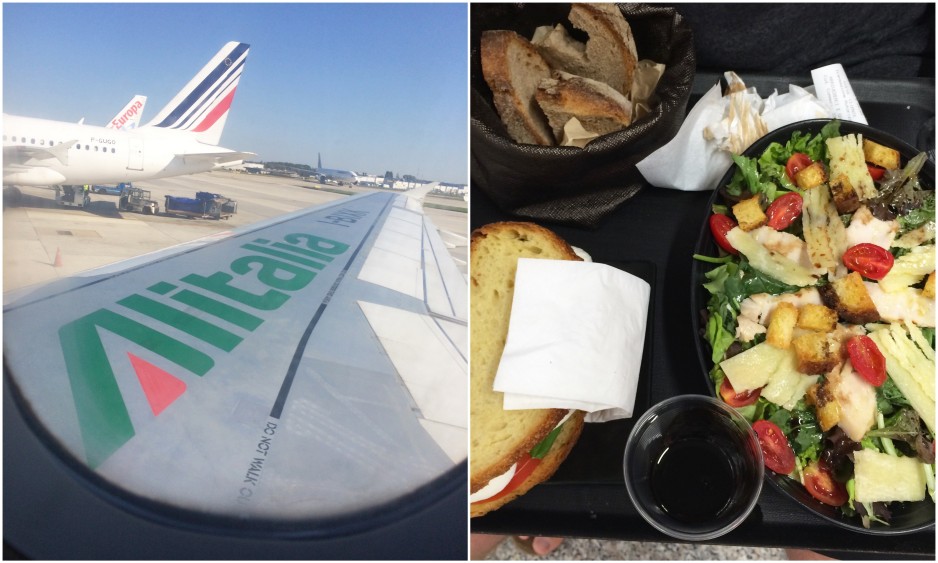 this is when we began to learn an important lesson…to NEVER ever EVER fly
alitalia airline. haha, if we had only known the issues this airline has before
buying flights with them! it turns out they are never not delayed, and had the
craziest disorganization i’ve ever seen. we ended up being delayed hours and
hours sitting in rome, with chase starting his new job in milan the next day. 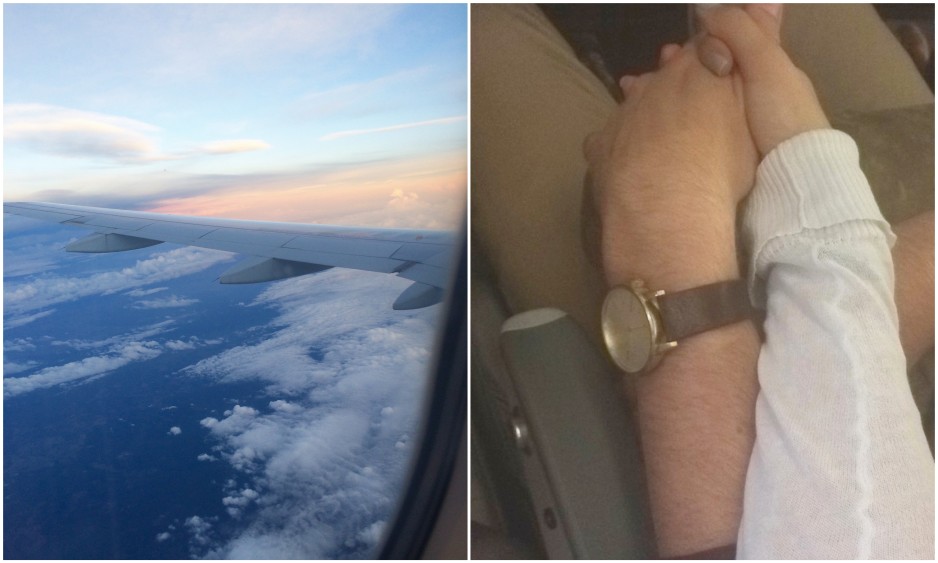 i had passed my cold onto chase and it really started to hit him as we waited
at the airport. once we got on the plane late at night he had a full runny nose,
sore throat, and was so stressed about starting the next day. we finally took
off and headed to milan thinking we’d have a smooth arrival and take a cab
straight to our place, but the funniest part is that the worst was yet to come! 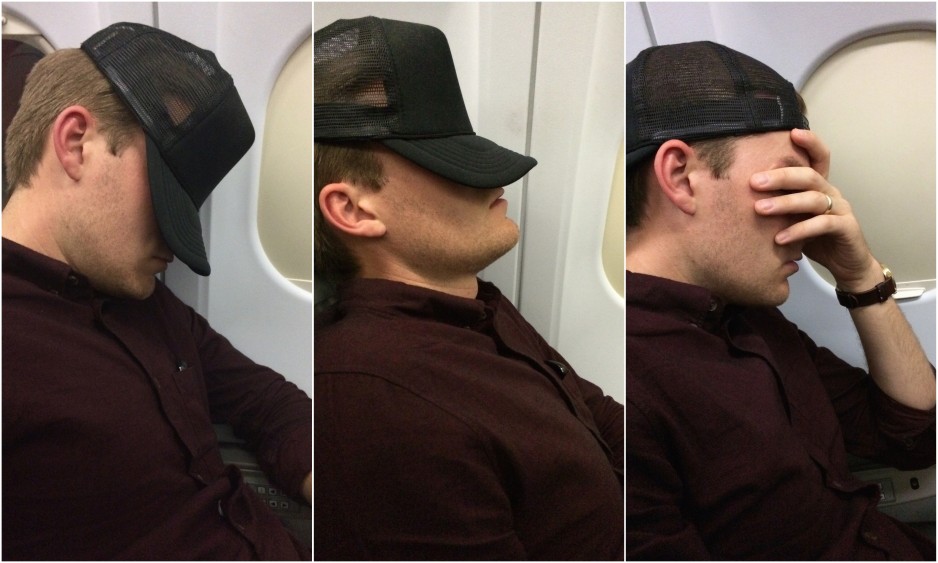 ^^ here is chase going through the different stages of insanity on the
flight. i was laughing but also feeling so bad for him while taking these.
he is always a trooper but it was just too much to be getting sick,
starting a new job, and being stuck on a flight all night long.
right before we had taken off for rome the airline made chase
check his carry-on just to save room on the flight, so he had
no choice. we hate to have to wait for baggage claim, so we
were planning to grab his bag fast and get a taxi once we
landed…little did we know, that wouldn’t be an option! 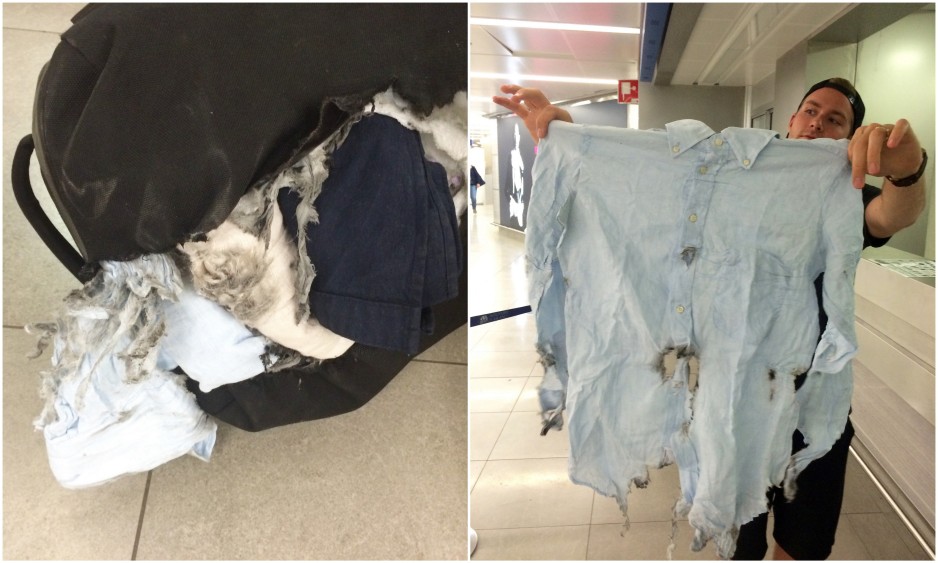 he got his bag off the conveyor and immediately i saw the bottom was almost
completely torn off…hahaha! truly, it was almost singed // melted // torn
through and his very favorite clothes were destroyed right along with it.
as soon as he pulled them out i burst out laughing SO hard. it really was
all i could do because it was just too much after our day. he had to
laugh too even though he was so beyond mad, and soon the entire
airport –staff, passengers, etc– were all laughing too. it was just
too ridiculous! we are still wondering how it even happened!

anywayyy, needless to say we were delayed further at the airport
dealing with alitalia baggage and filing a claim. the lady filing the claim
for us was trying SO hard not to laugh when she saw how bad the bag
was destroyed! she said they would likely cover it, but the problem is
that it was all of chase’s new clothes for work and he was starting the
next morning! by this time all the stores were closed. it was a nightmare! 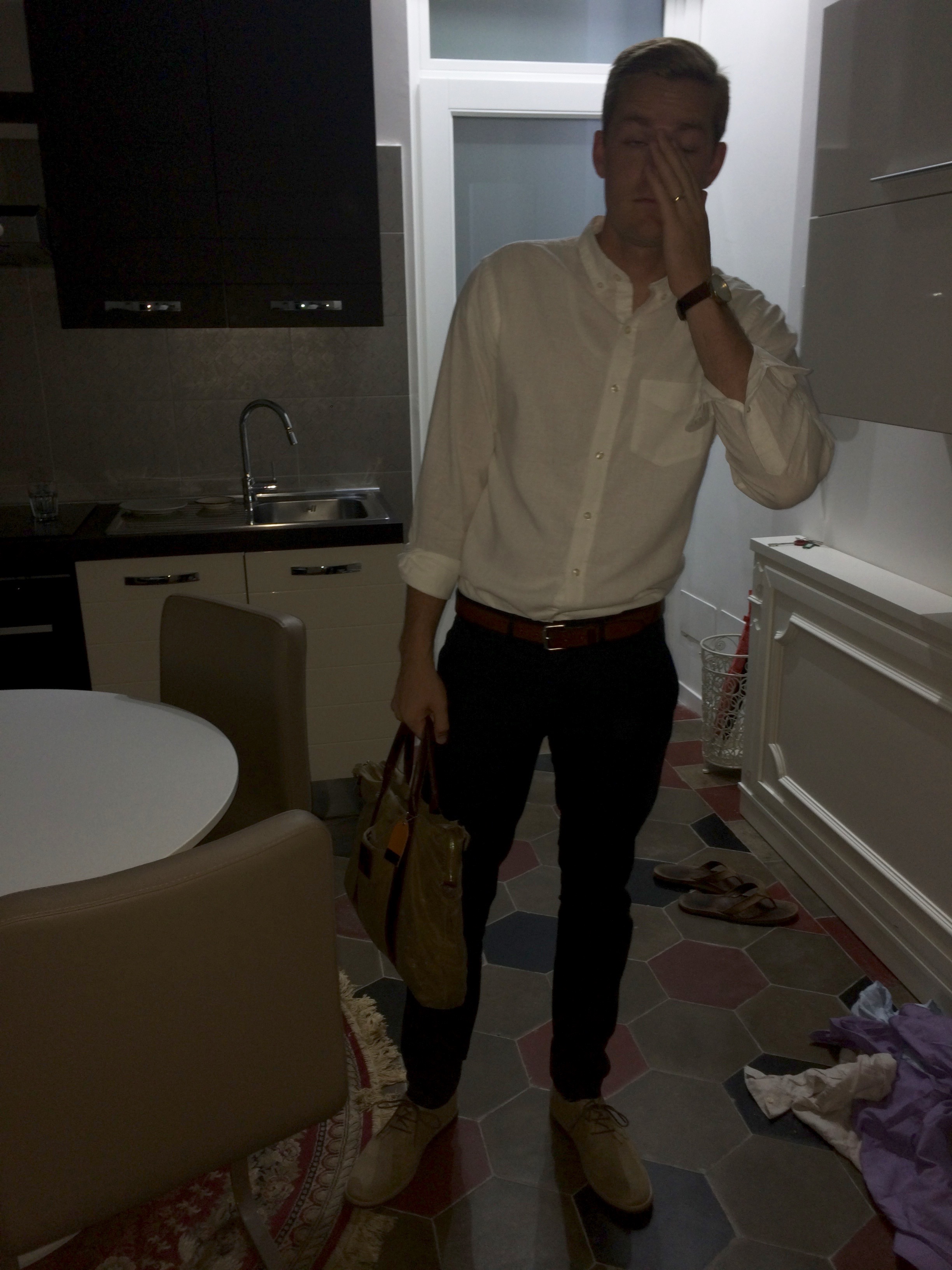 we got to our apartment, climbed straight into bed, and a few hours
later chase was up for the conference. he only had a few clothes that
didn’t get singed, (haha) so he wore them and i thought he looked pretty
cute. he was so tired and so sick (his voice was completely gone)… so you can
see how he felt about me taking a picture of his first day back to work at 6 AM ;)
not official first day, but it was a conference for work before his new role began! 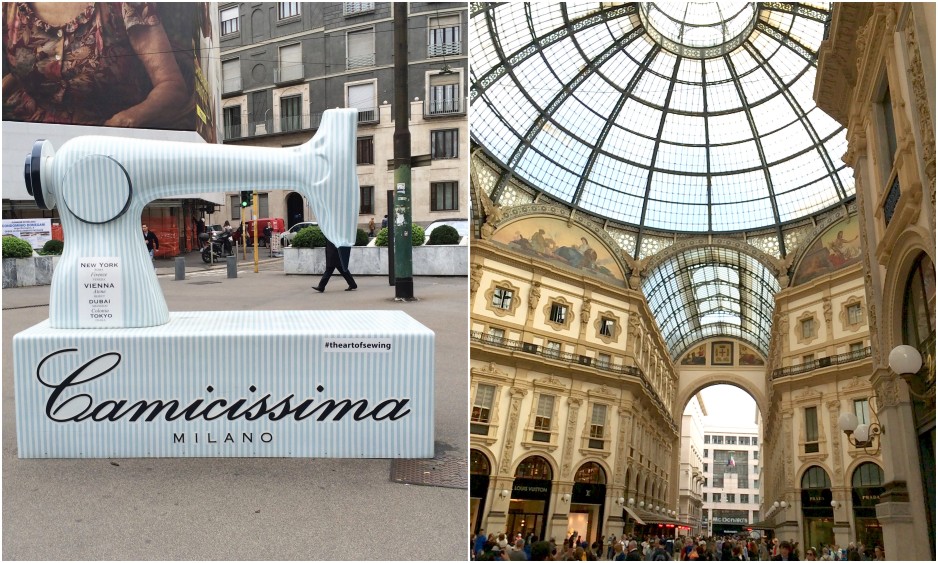 meanwhile that monday i ran out to get him new clothes. luckily milan is a fashion
capital, so it wasn’t too hard and later the airline reimbursed us for a lot of it.
chase’s favorite store is camicissima from our last visit here (if anyone remembers
the famous blue linen shirt story :) so it was lucky that we were in the same city that
he got it! i ran all over town replacing some of his clothes and his north face bag. 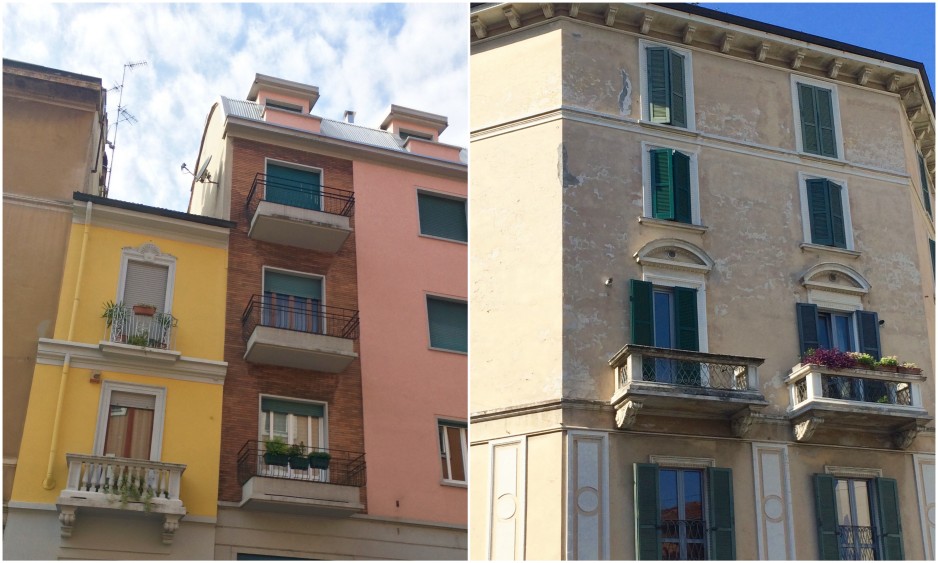 from there everything got so much better and we fully enjoyed our time in milan.
he got feeling better, got back in the groove at work, i caught up on things, i
cooked, and we just enjoyed a taste of living in milano for a week.
^^^ look how cute our apartment building was! 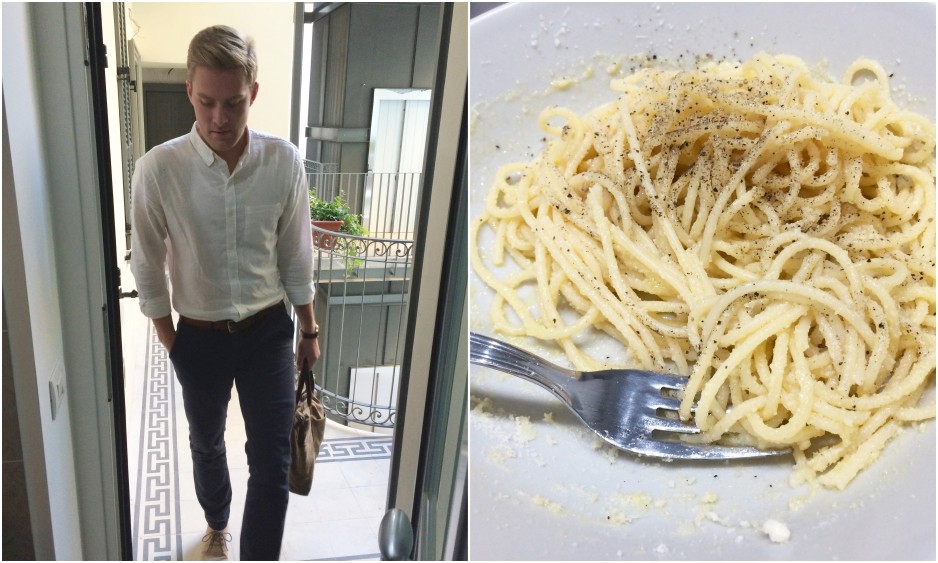 i loved feeling a little back in a routine with chase back at work, me having
time to work and catch up all day, and then making a simple dinner
in our little flat when he got home. after months of zero cooking on
the road, i started simple with some cacio e pepe pasta..it hit the spot! 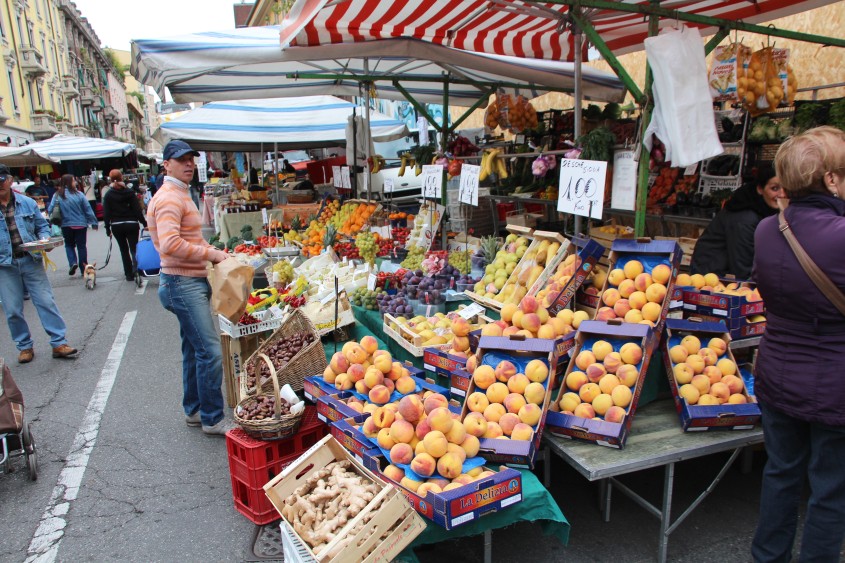 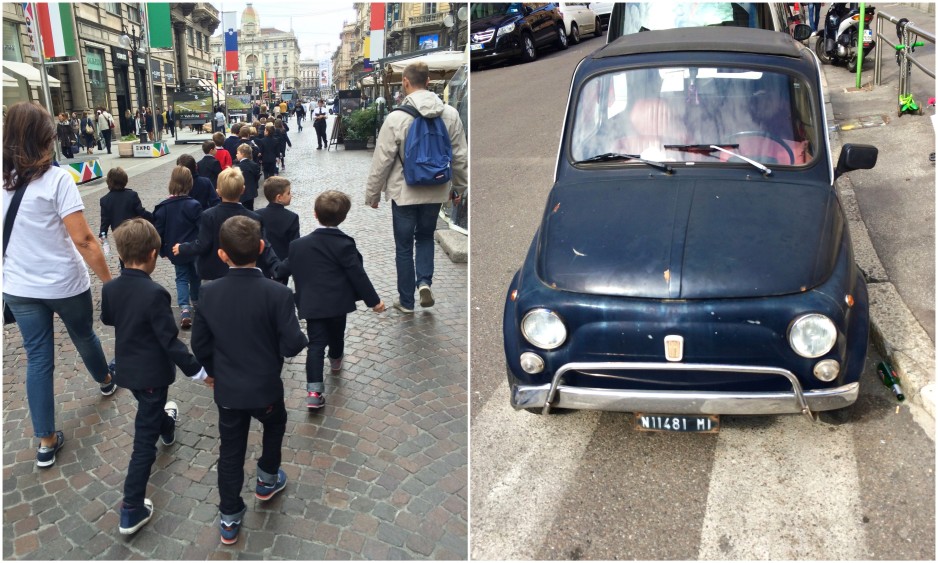 i mostly worked during the day here (and attended the world expo, which i’ll share
next post) but i did get out and walk the city too. temperatures were perfect
and i loved seeing things like vintage fiats + little italian schoolchildren in a line. 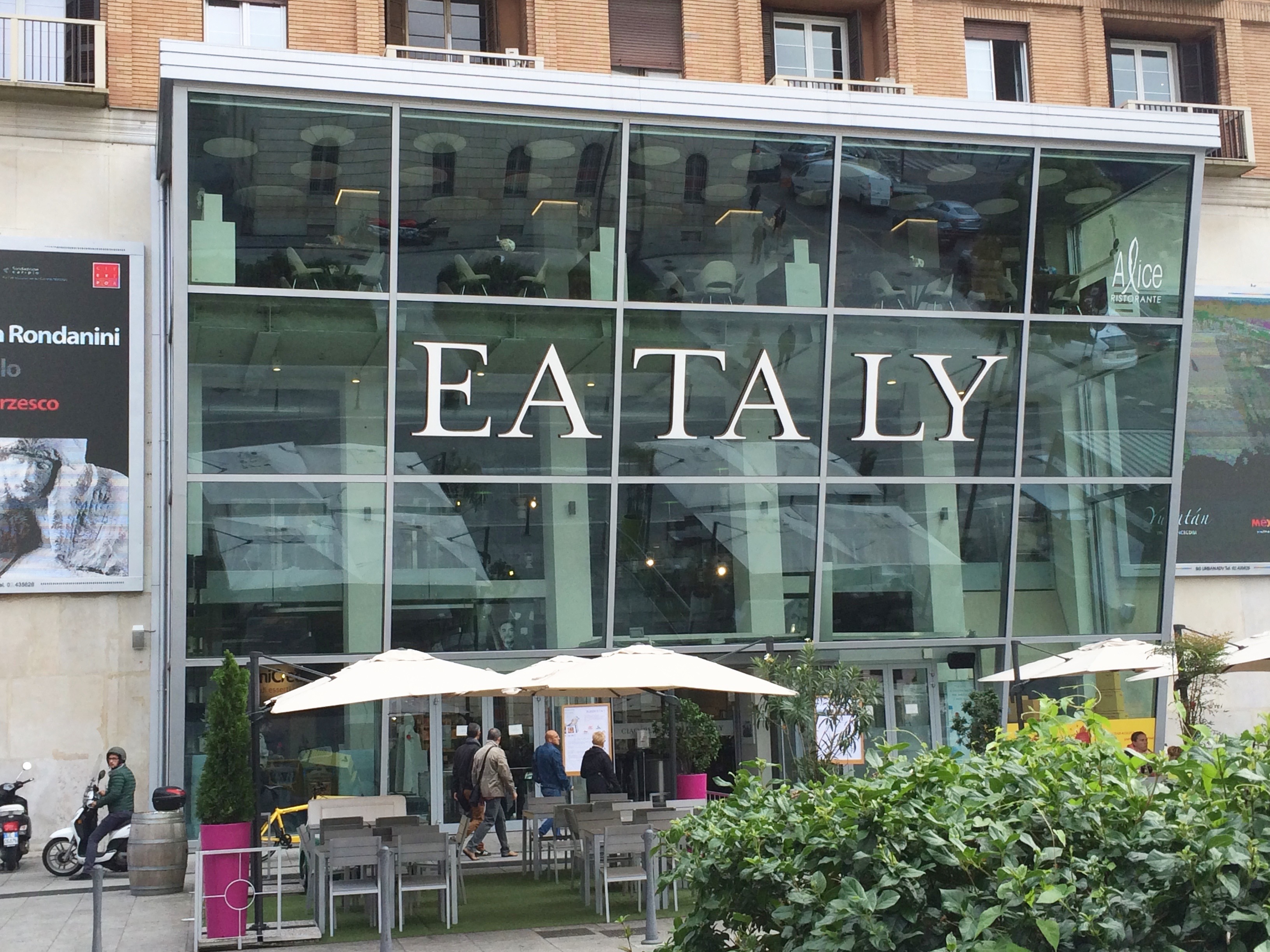 i was also very happy to find that eataly has a milan location,
since it’s one of our very favorite stops in NYC! 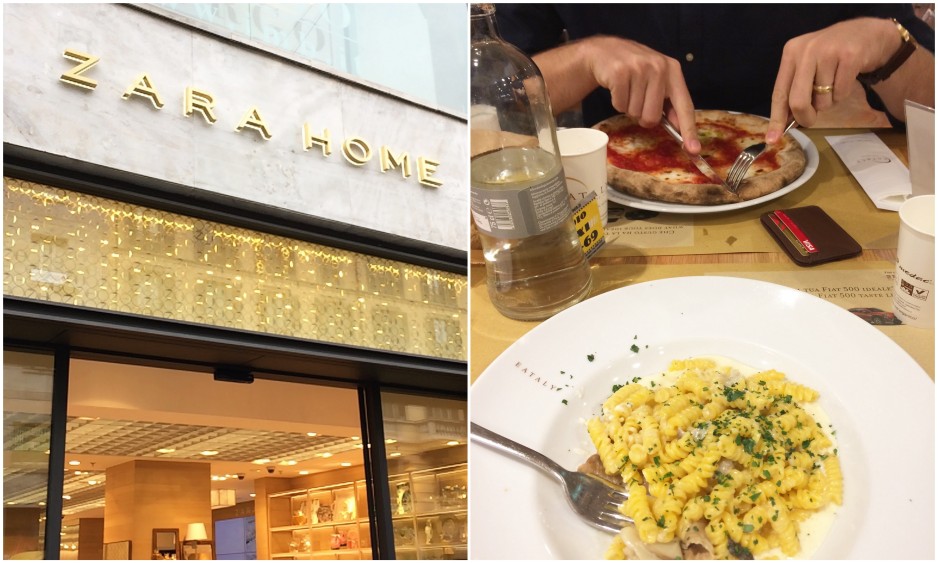 i frequented the zara home store since we were getting closer to having
a home over here, and again…we definitely frequented eataly.^^ 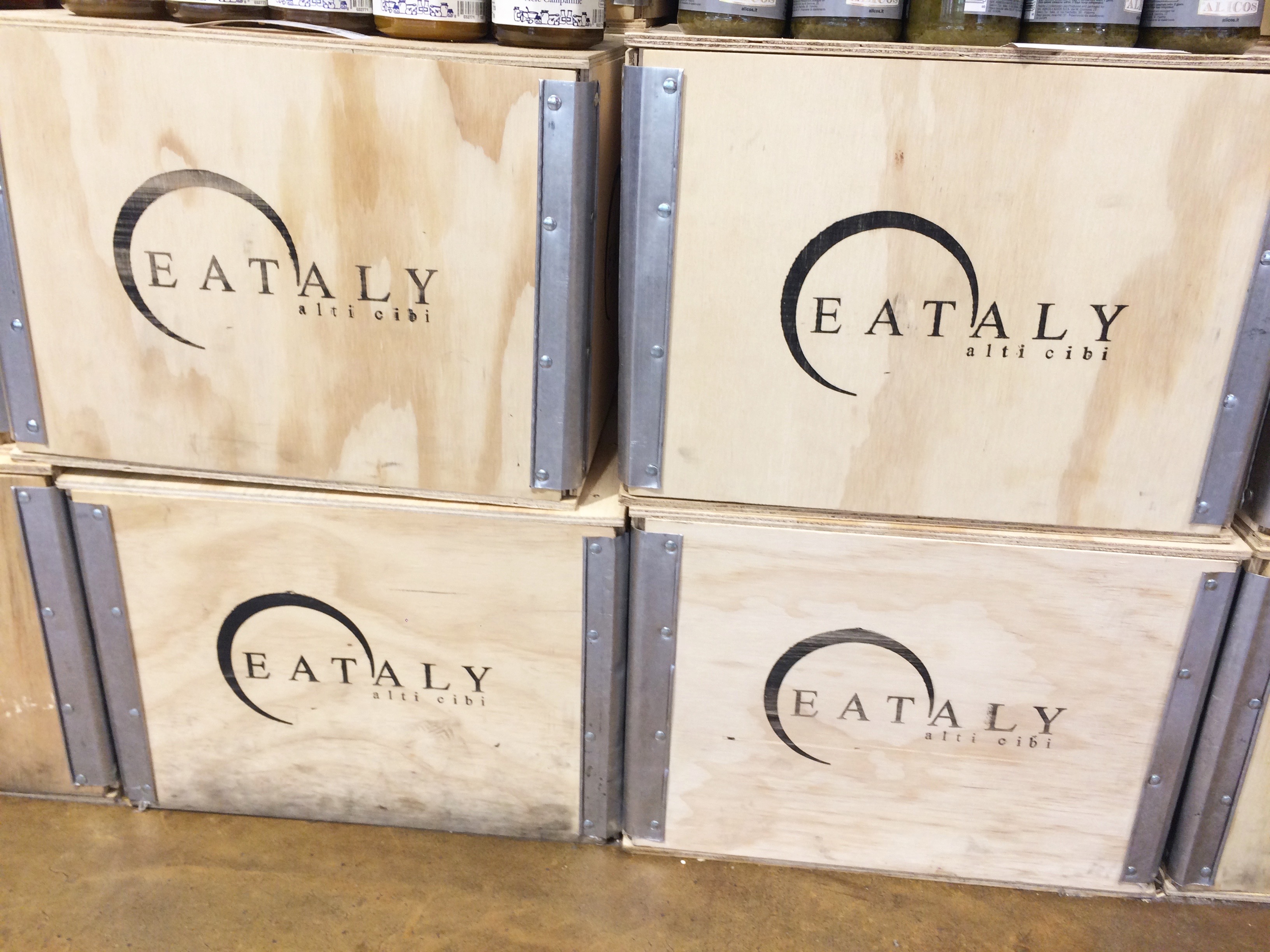 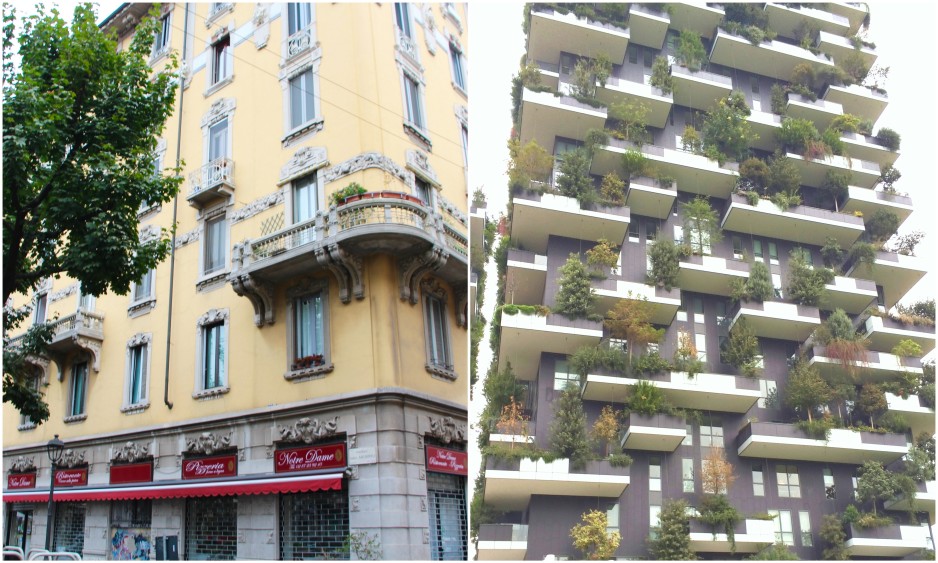 the buildings around where we were staying were so pretty.
this more modern apartment building with plants growing out
of it is really famous in milan and such a cool eco-design idea i thought. 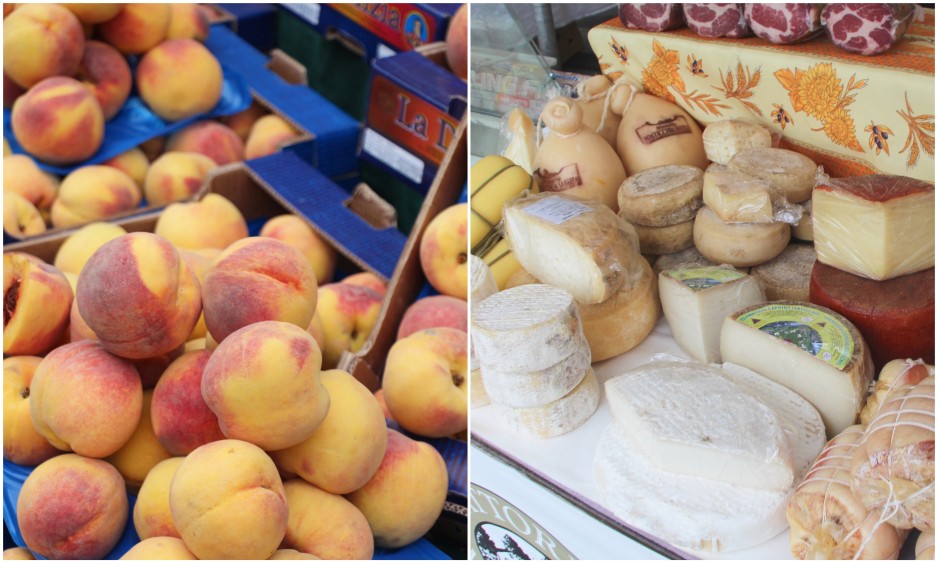 there was a little street market near our place each morning
that i found myself wandering through almost daily. 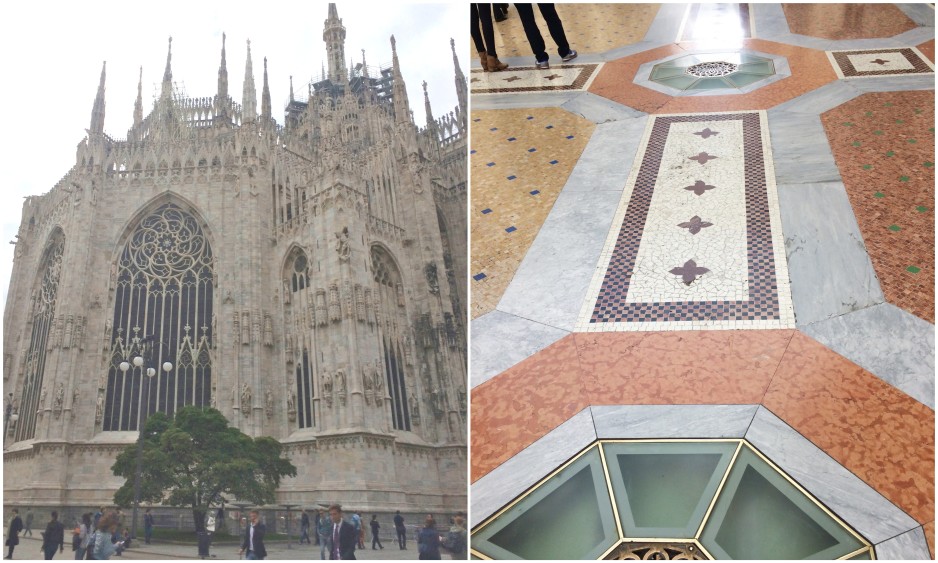 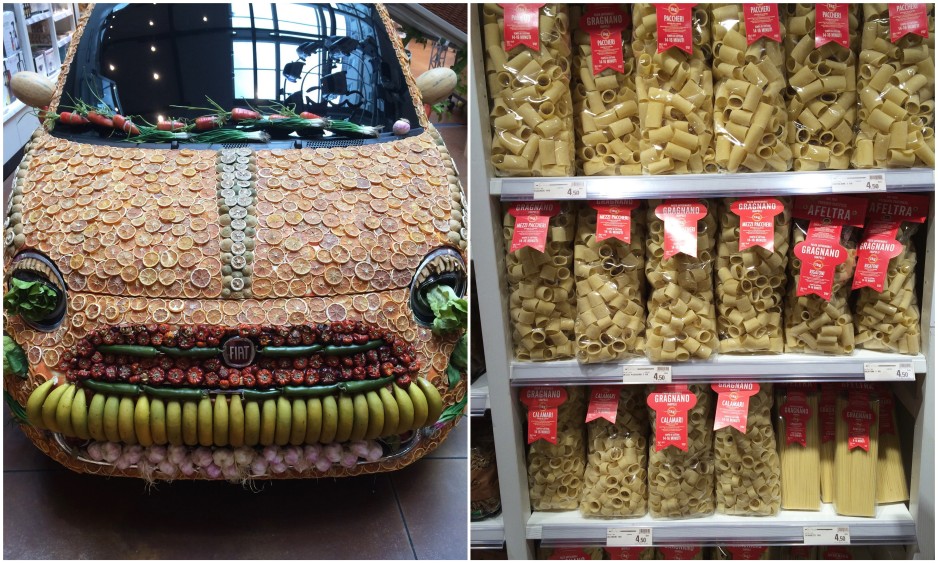 more reasons to love eataly : fiats covered in fruit, and pasta of all shapes + sizes. 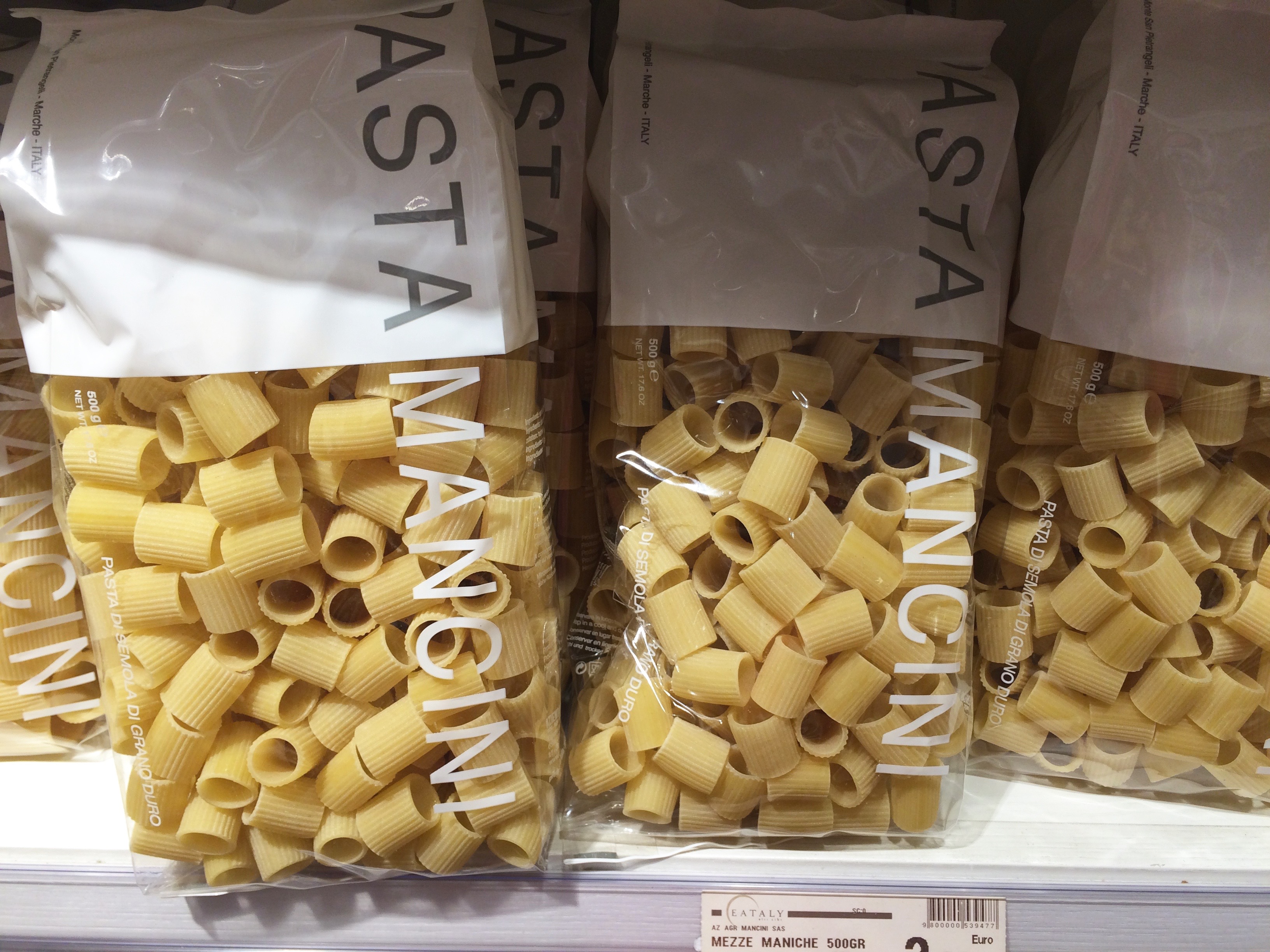 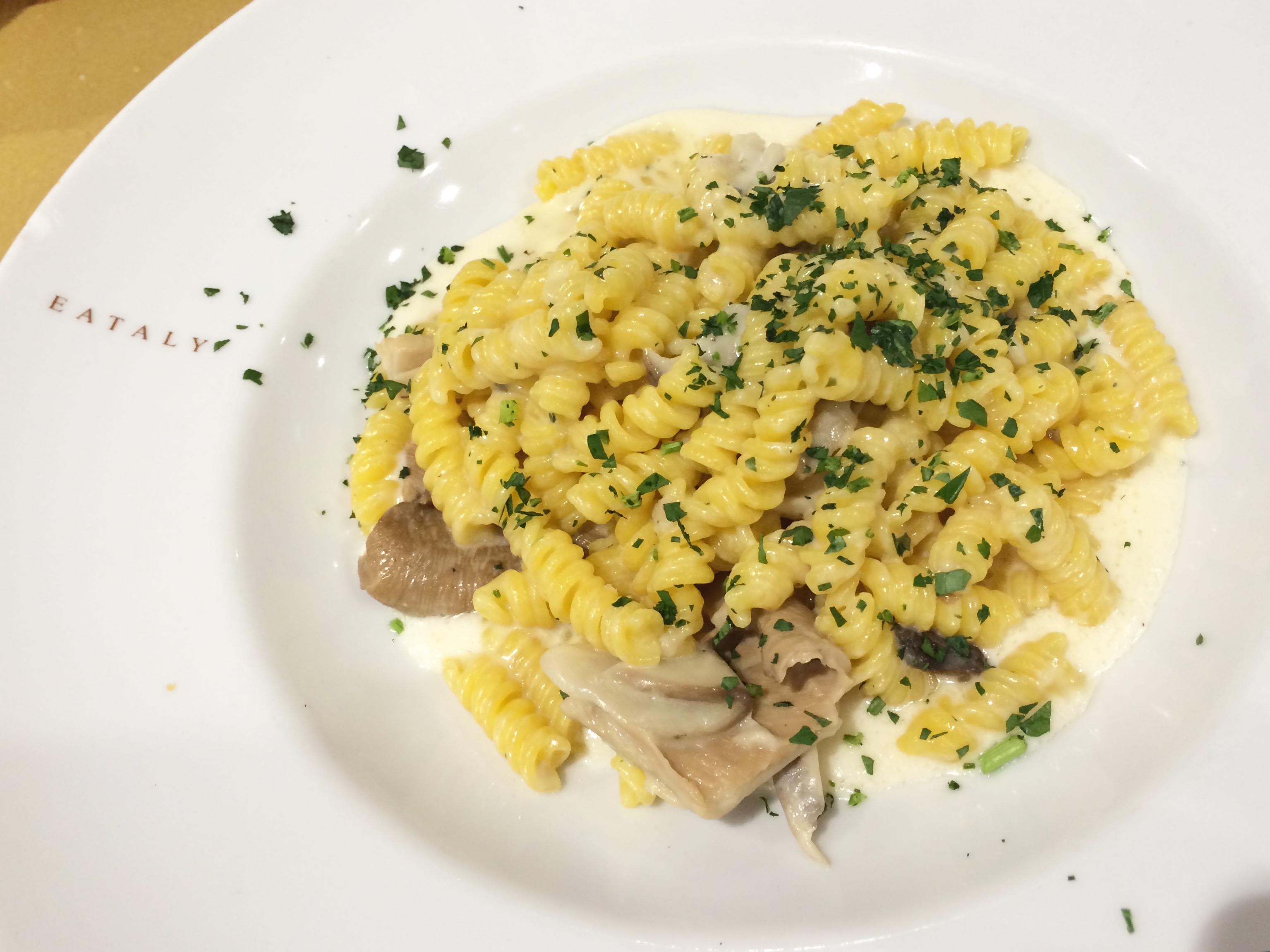 seriously, i went back for this gorgonzola mushroom pasta at eataly a few times. 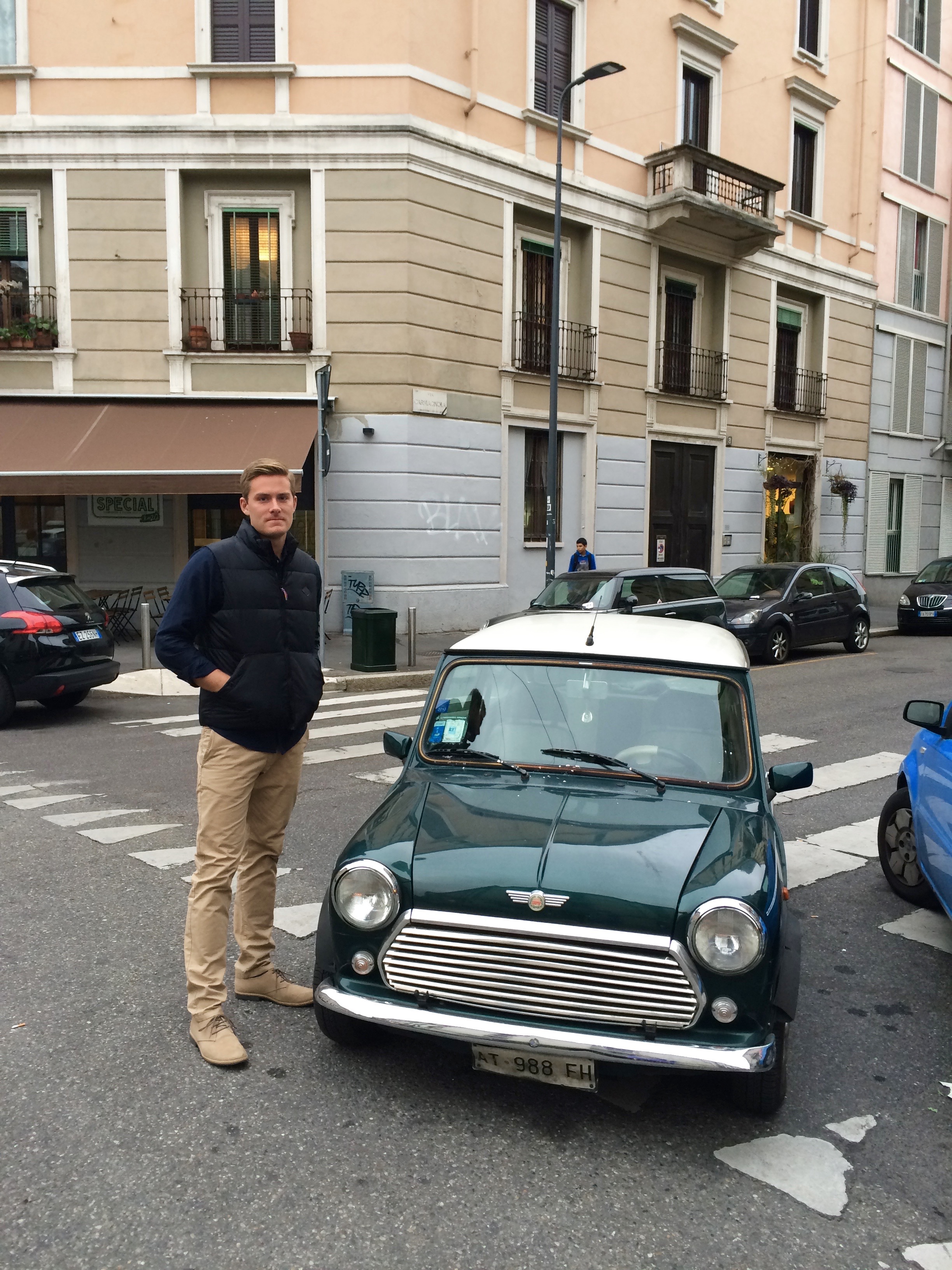 cutie by a mini little car ^^ 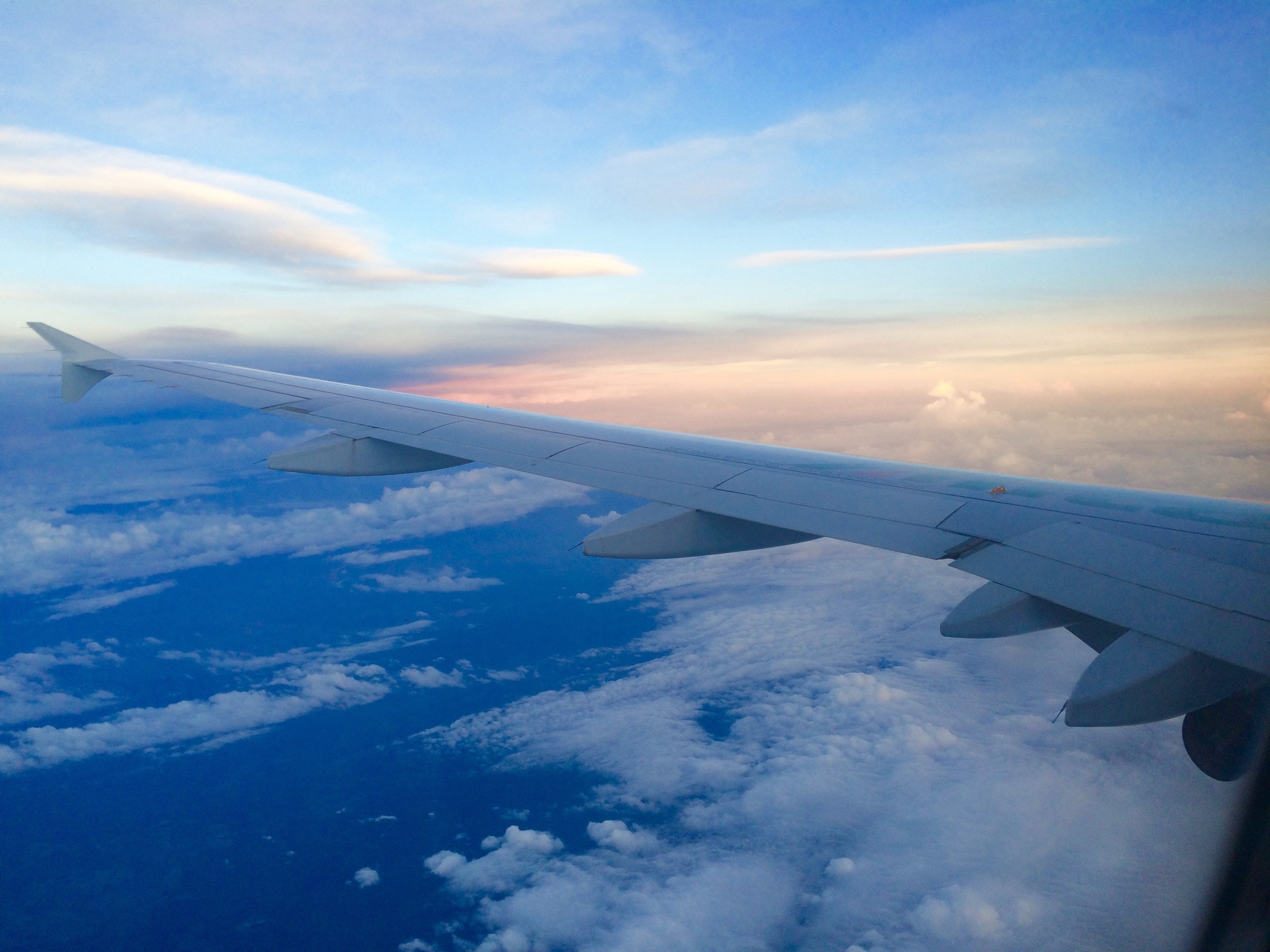 after a fun week in milan we jetted to madrid for chase to
attend a kickoff week for business school (i know, he has
had SO much going!) i’ll share the milan expo first, then
see you from madrid!

5 thoughts on “back to milano on a terrible airline :)”