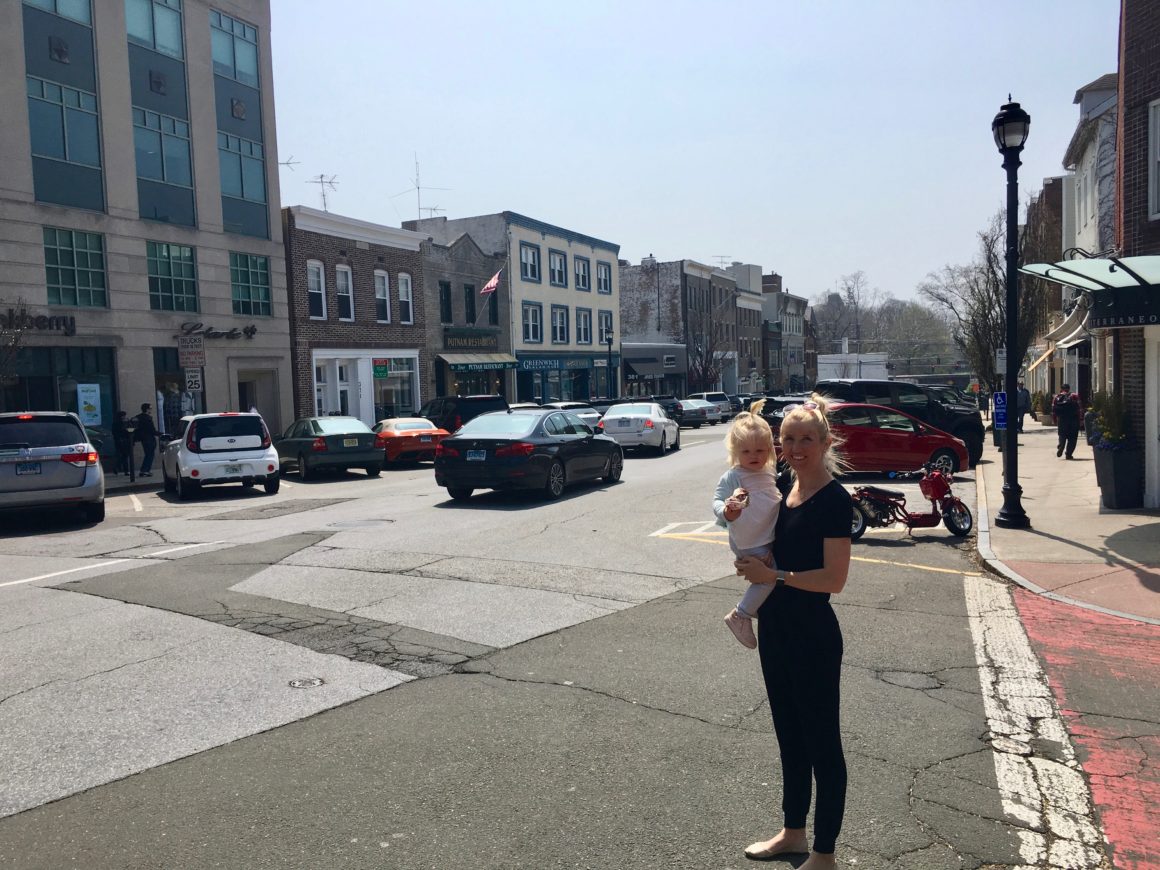 After our fun NYC week, we rented a car and headed up the Connecticut coast
to stop through the charming towns along the way up the Long Island Sound.
I’ve always wanted to see this area and never have! It seems similar to the area
where we now live compared to San Francisco – in the Bay Area the “Peninsula”
is lined with darling towns and nice suburbs where people move to get out of the
city and commute back for work. A lot of the CT towns we visited are similar for
Manhattan. Greenwich, New Canaan, etc. felt like the East Coast versions of our
Palo Alto, etc. They are right on the train line, filled with families, big homes, cute
downtowns, etc. I guess the only difference is down by us we also have the heart of
Silicon Valley, so there are tons of jobs and now even more expensive housing …
whereas these Connecticut towns are more laid back and away from the business of NYC.
Connecticut also has that East Coast classy charm that you can’t compare :) It was fun to
stroll the streets on a springy day and stop through random places! We also veered up to
New Haven to see Yale University’s campus, which I never had. It was amazing to see!
Needless to say, we were fans of Connecticut. I want to go back and see more of it one day!

Here was our rough itinerary and notes for our drive, helped by our cute friend Lizzie who lives there:

We drove along the Merritt Parkway for most of the day because it was so pretty, but the I-95 is more convenient & faster. It’s said to be one of the prettiest highways in America…can’t imagine it in full bloom during the summer or colors in the fall! We stopped through:

â-‹ Greenwich- Greenwich Avenue: cute restaurants & shopping. Vineyard Vines store is fun to stop into here, since the founders are from Greenwich!

â-‹ Darien- another cute town with a charming downtown, (and a shake shack!) Weed Beach and Pear Tree Point Beach are pretty.

â-‹ New Canaan- SO fancy and charming! This is where I’d want to live if I was back there :) Tour The Glass House!

â-‹ The Norwalk Aquarium- supposed to be the best in New England.

â-‹ Stamford- Lakeside Diner for the best homemade doughnuts! Also- Stamford Nature Center and playground. Not the cutest town but those are gems!

Other stops I had written down and made Chase drive through while R slept in her carseat: 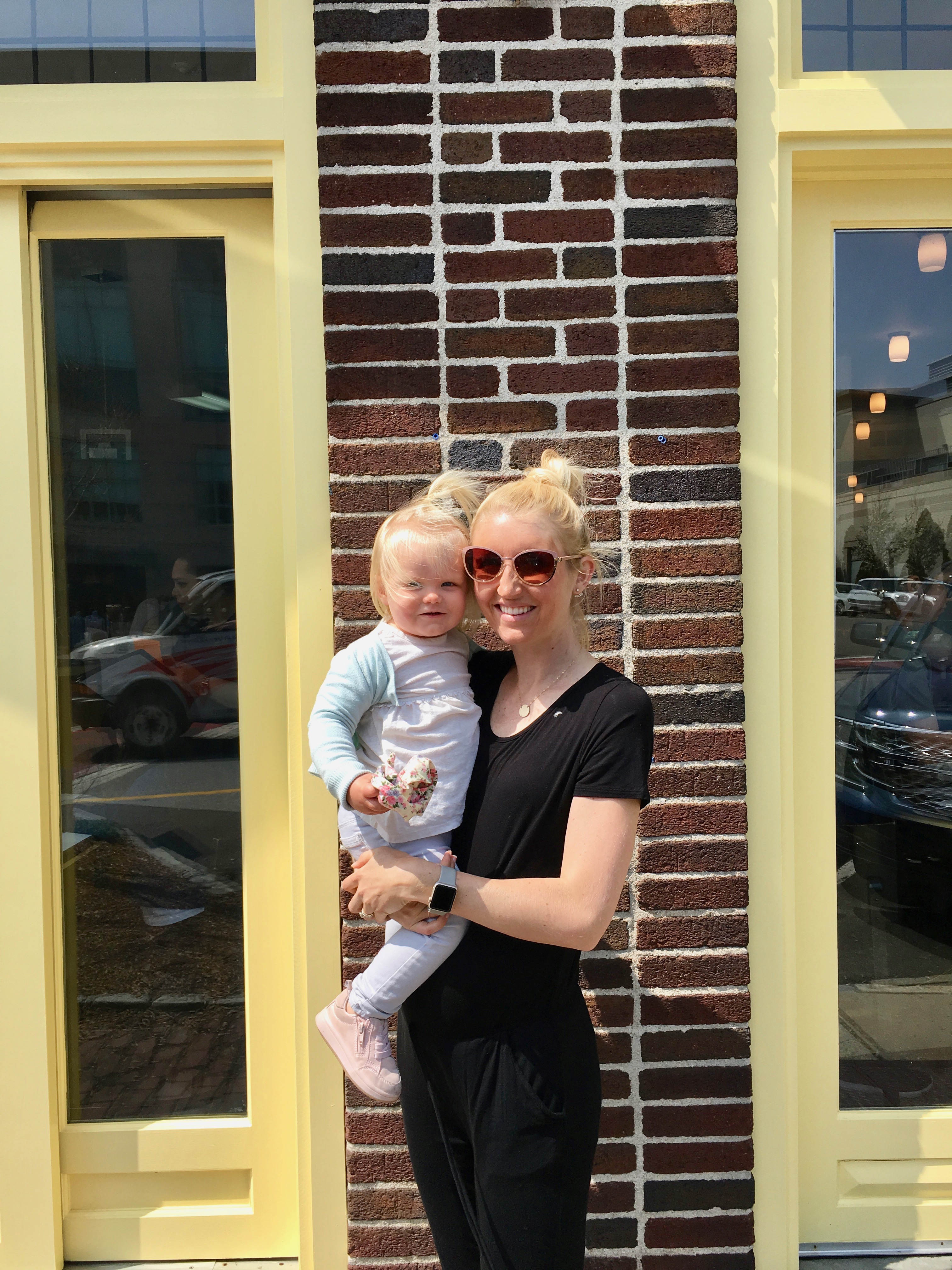 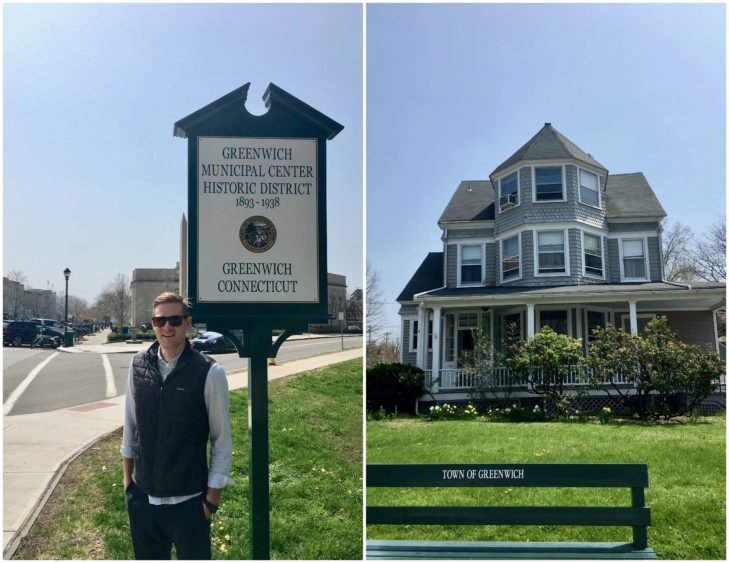 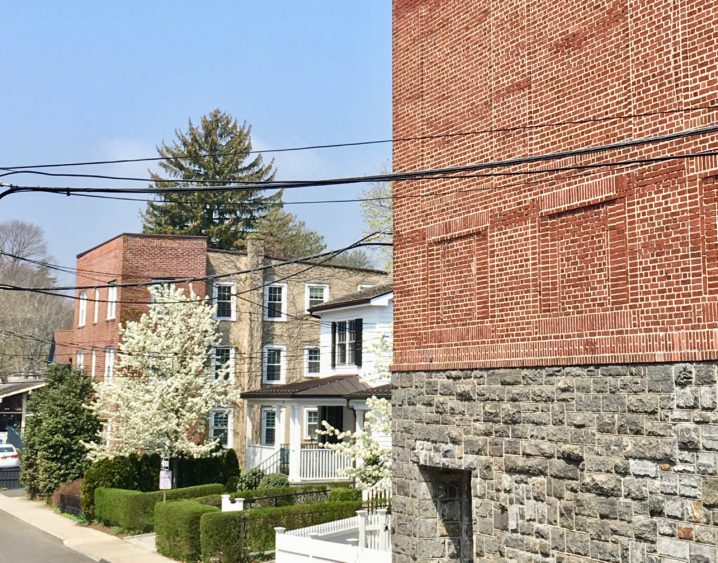 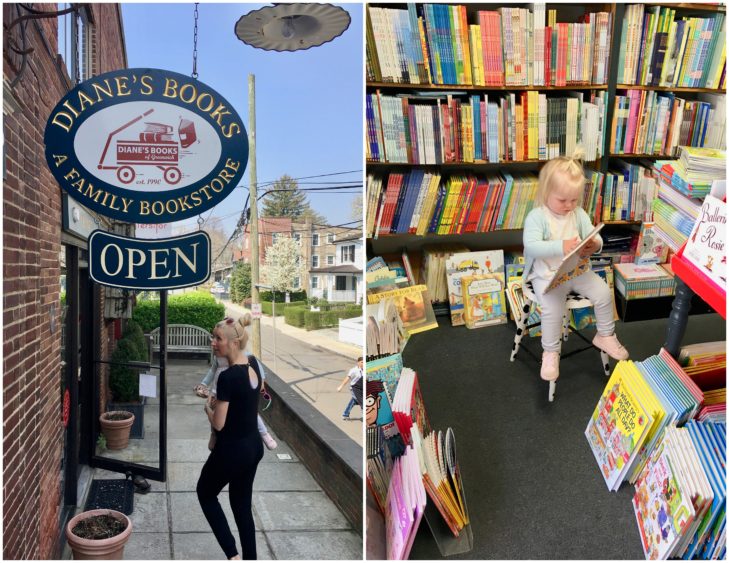 Checking out this classic bookstore in Greenwich ^^ R loved it and made herself right at home. 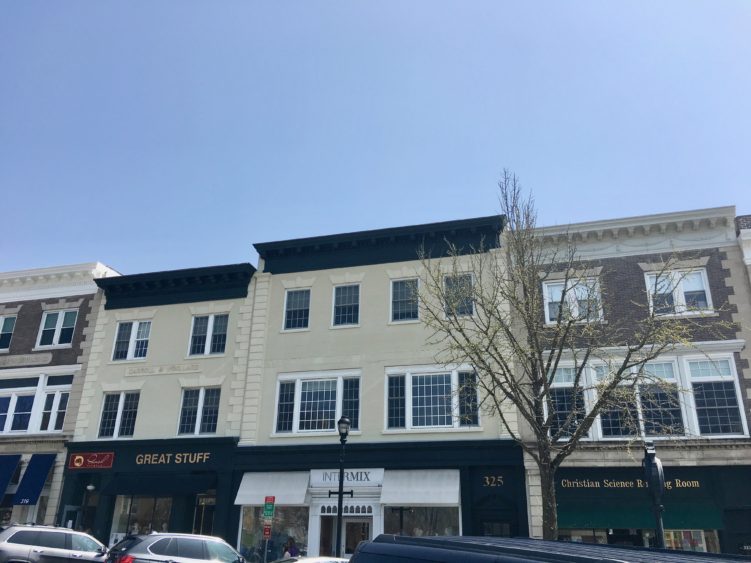 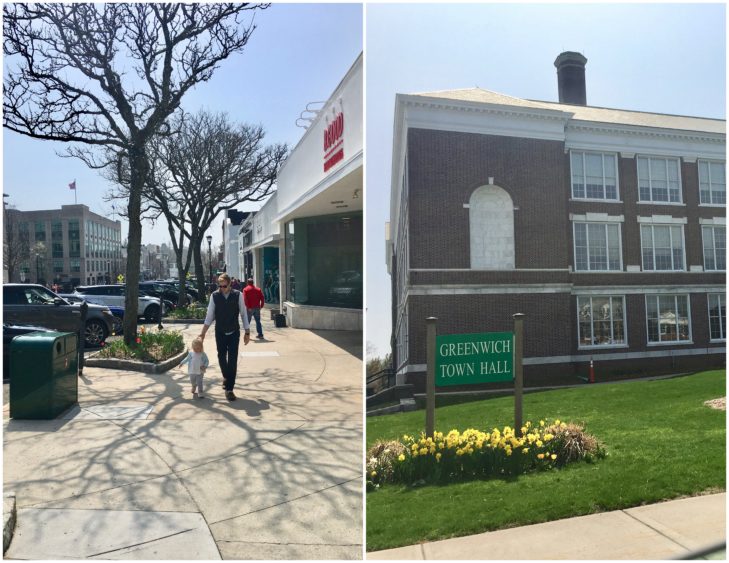 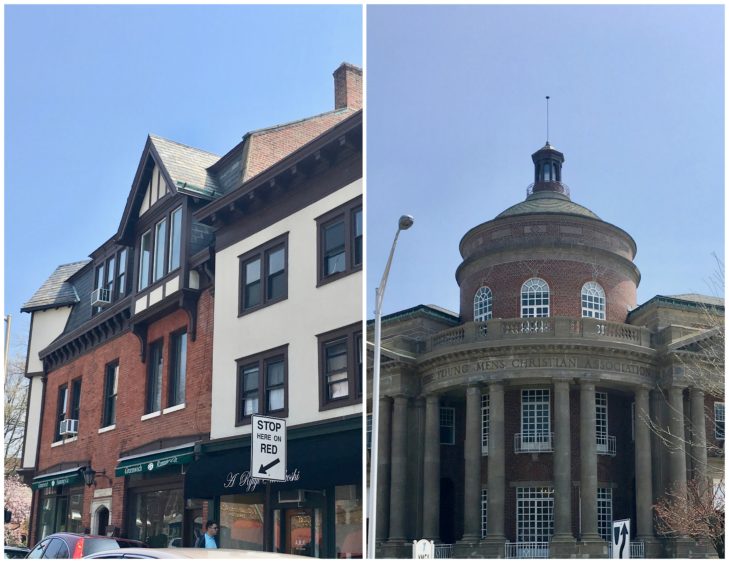 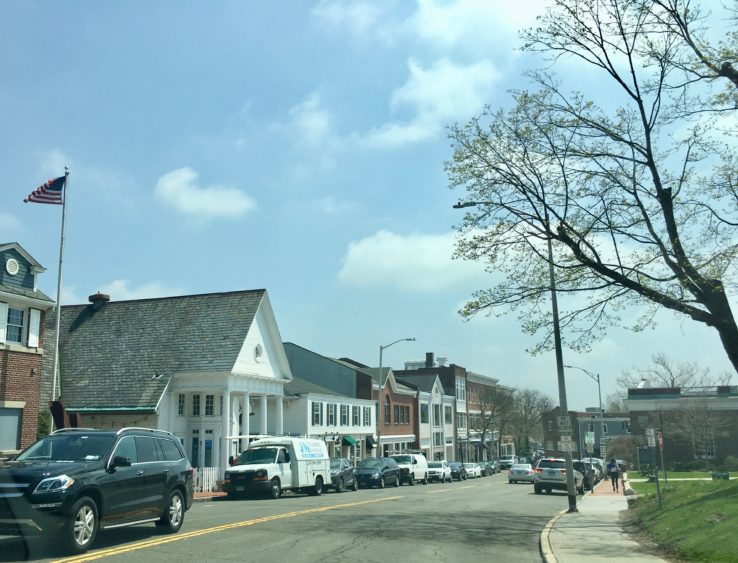 Darling New Canaan ^^ I was obsessed! 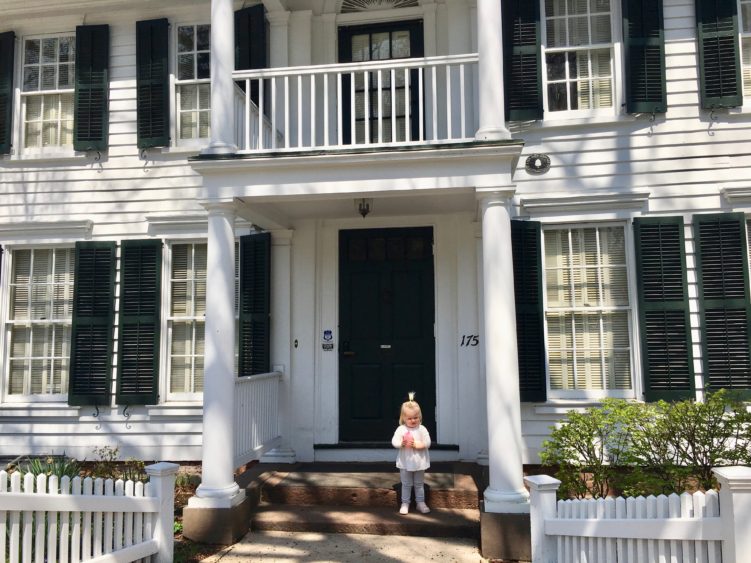 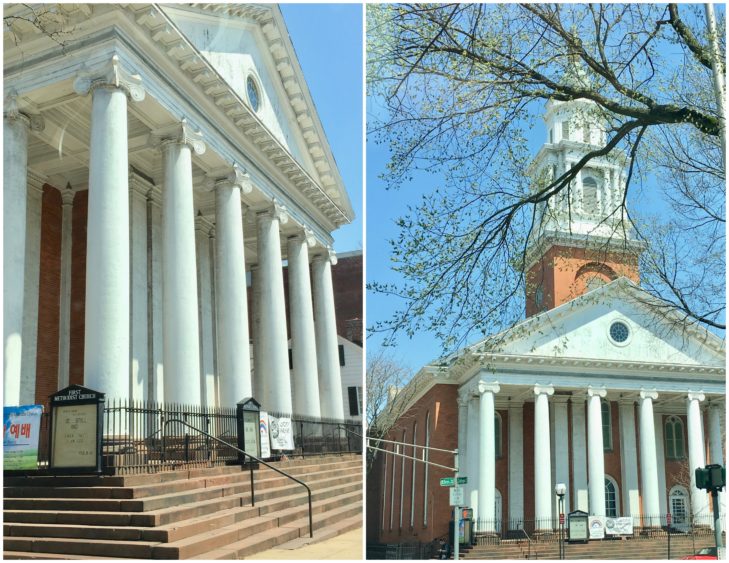 On to New Haven to see Yale! 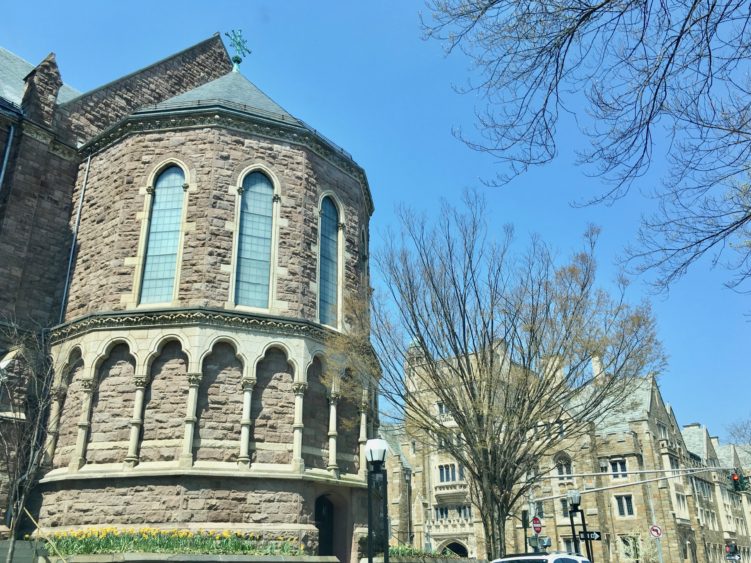 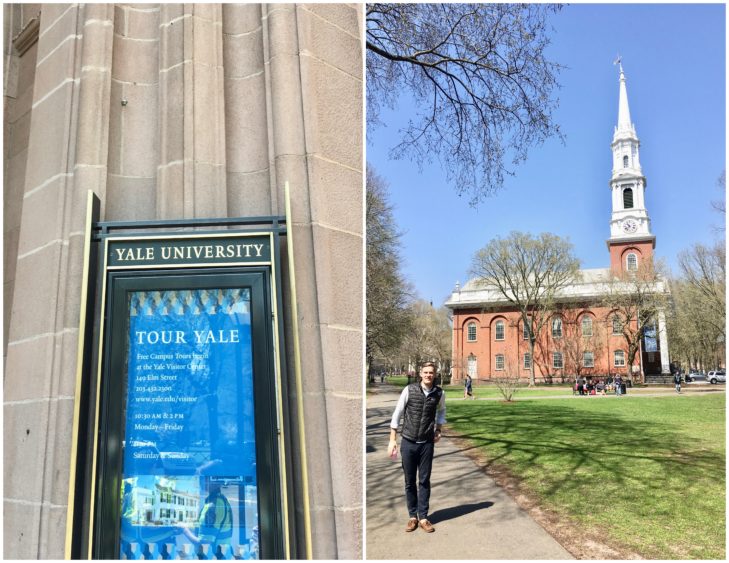 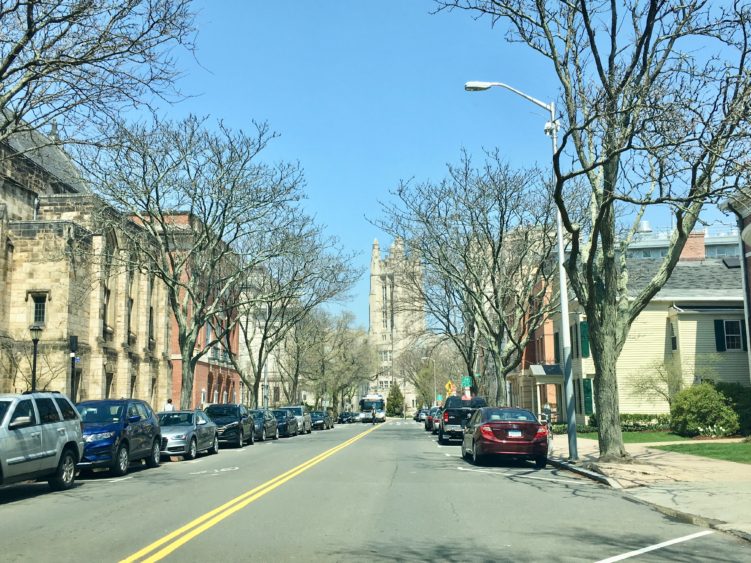 New Haven was so different than I expected.. driving into it you can’t
believe it’s the city Yale is in! It looks a little industrial and run down.
But– when you get into the campus part and Old Campus area, it all
makes sense and feels so charming and historic! What a cool place. 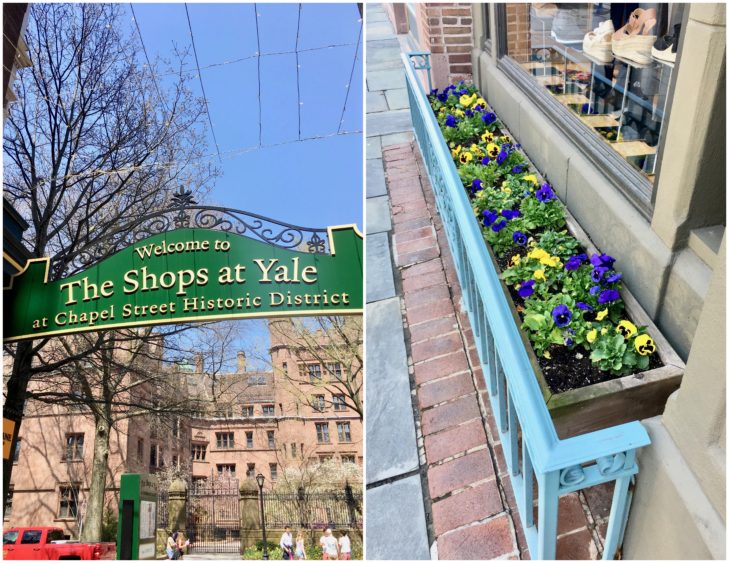 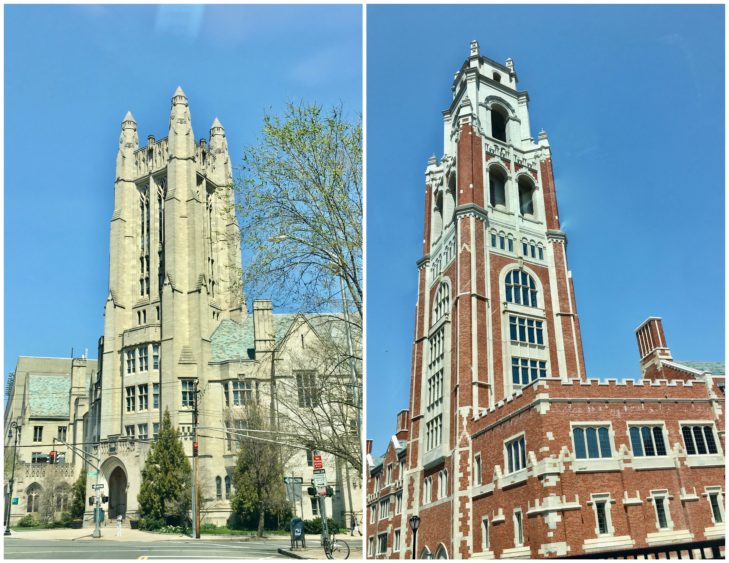 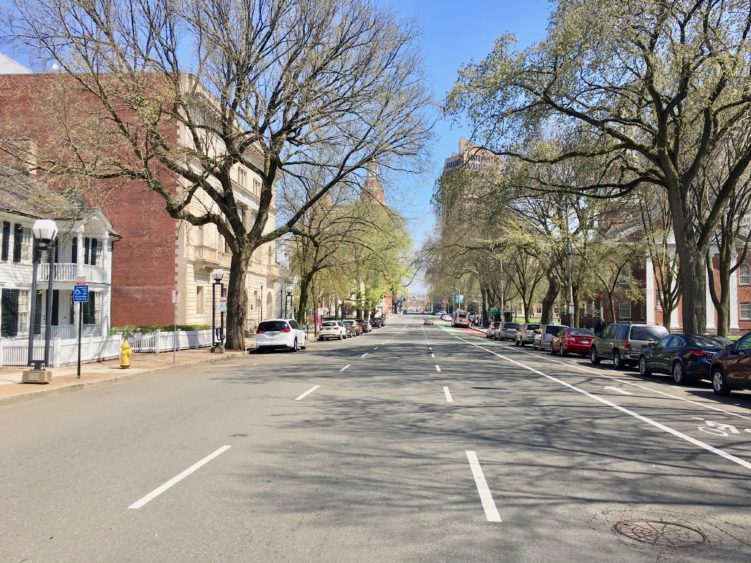 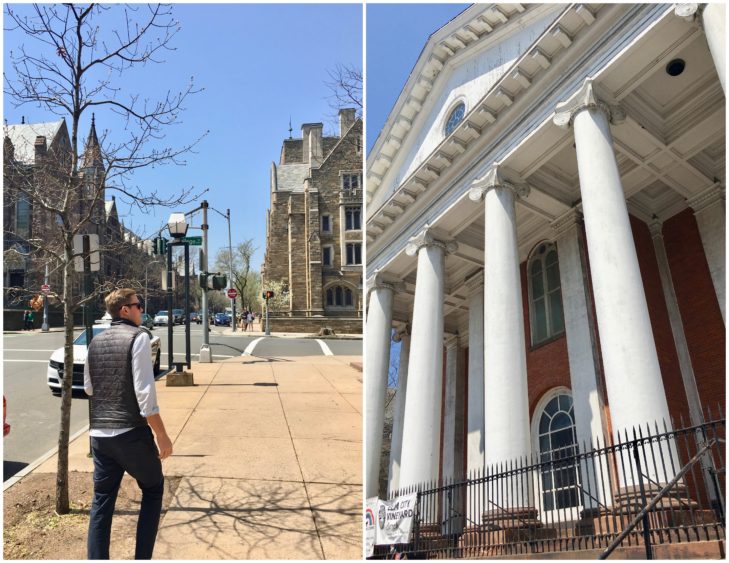 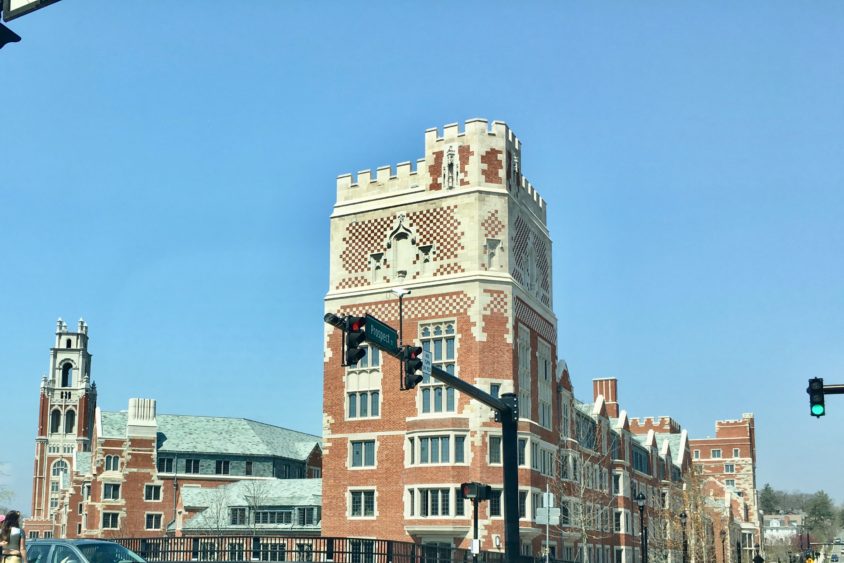 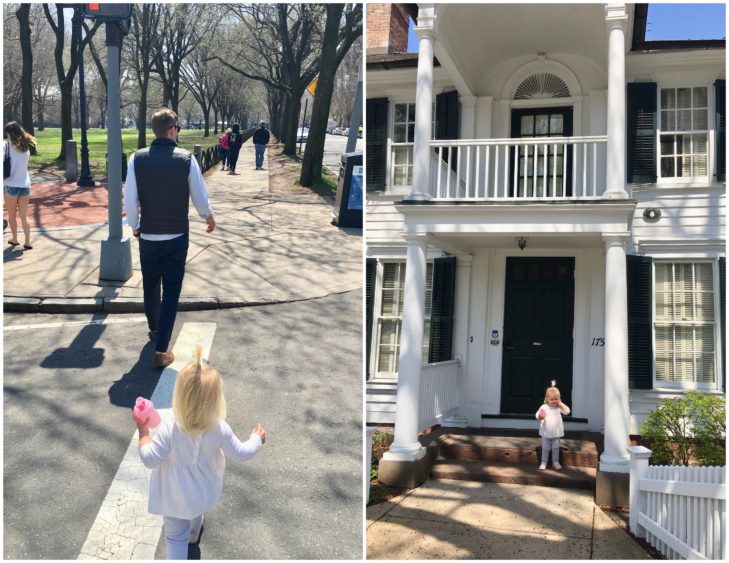 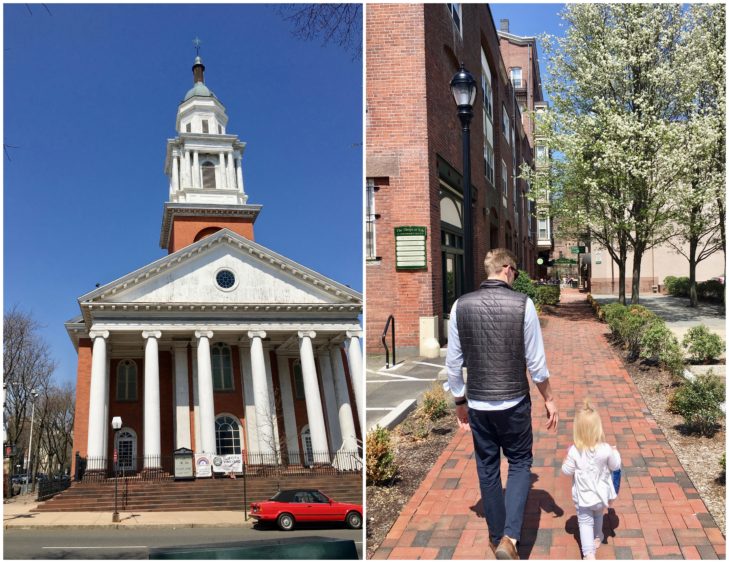 I love walking around a new place with these two. Also, my dad’s grandpa went to Yale
so I had to tell Reagan she is a legacy there! (But she’s not allowed to go so far :) 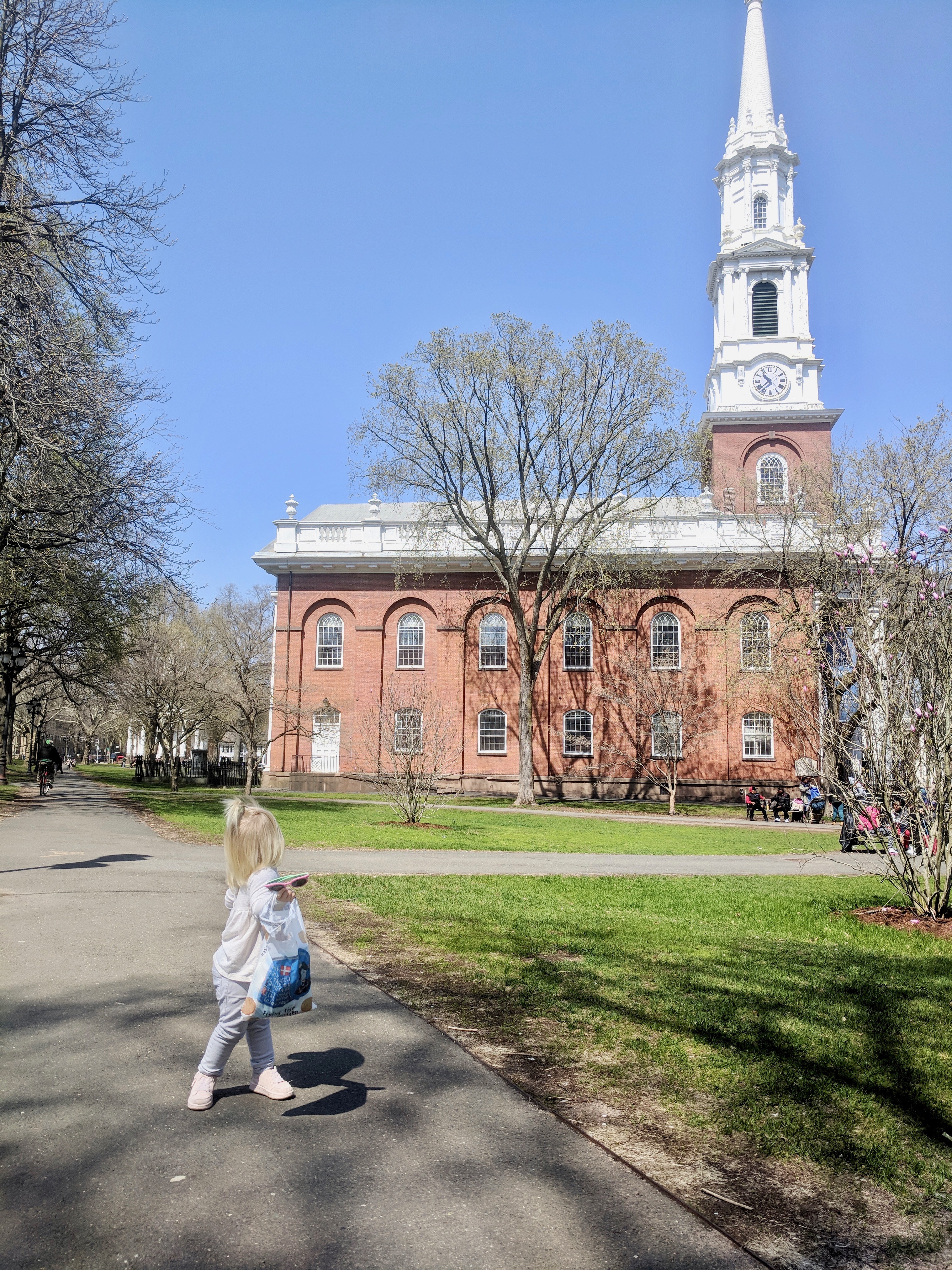 Before we know it, she really will be off to college :(
Better yet, might even be living comfortably in her student accommodation (like those Bloomsburg student housing, perhaps).
Better soak up every second with this little chick. 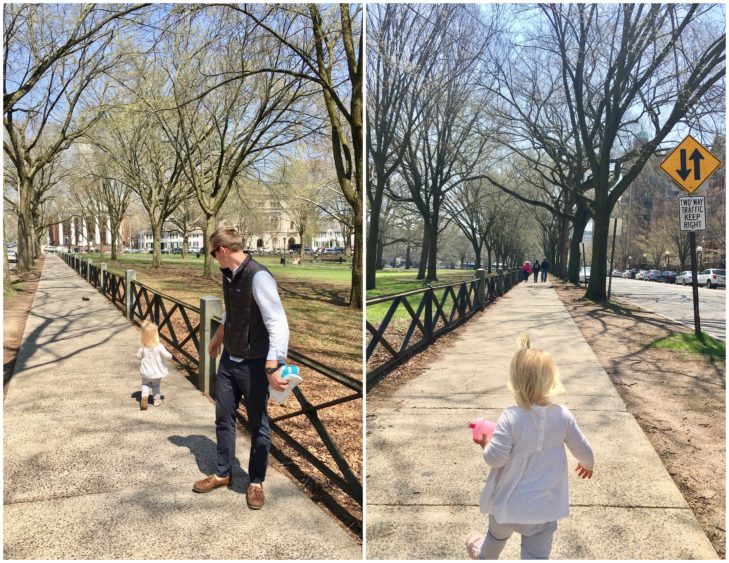 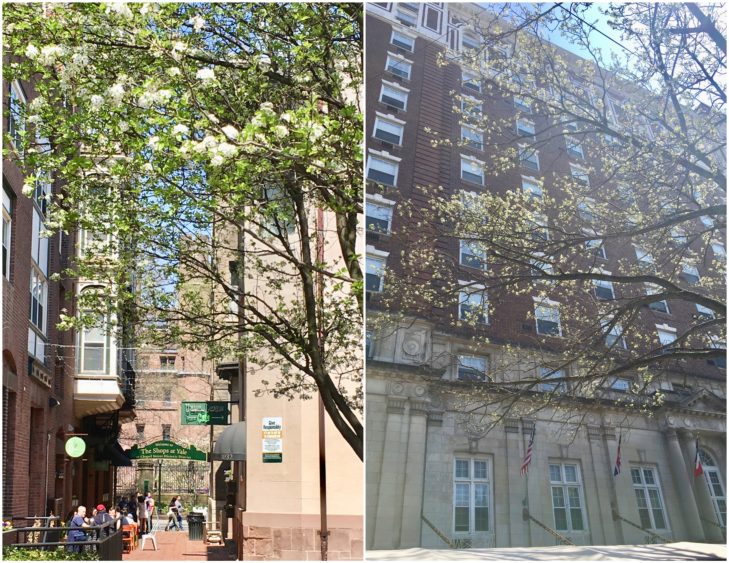 Spring blossoms all over campus ^^ 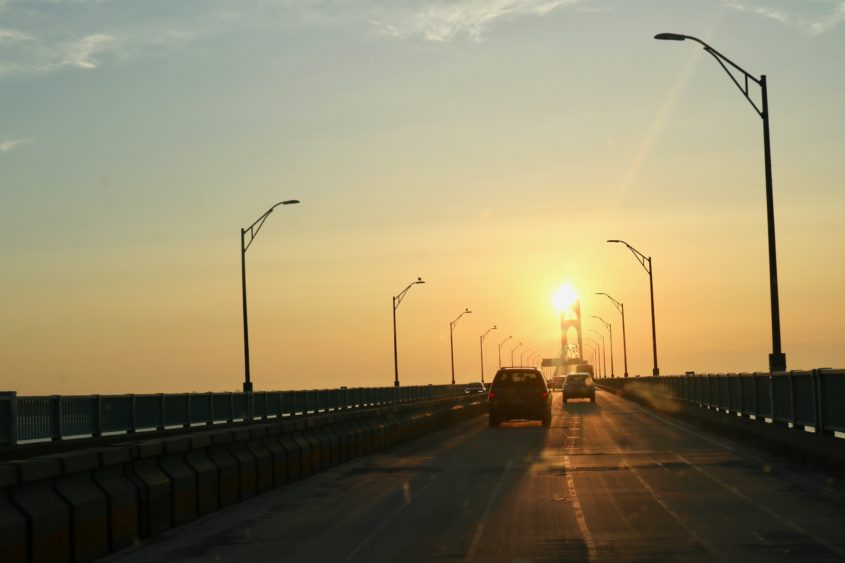 Continuing on and up to Rhode Island before crossing back over to the Hamptons!