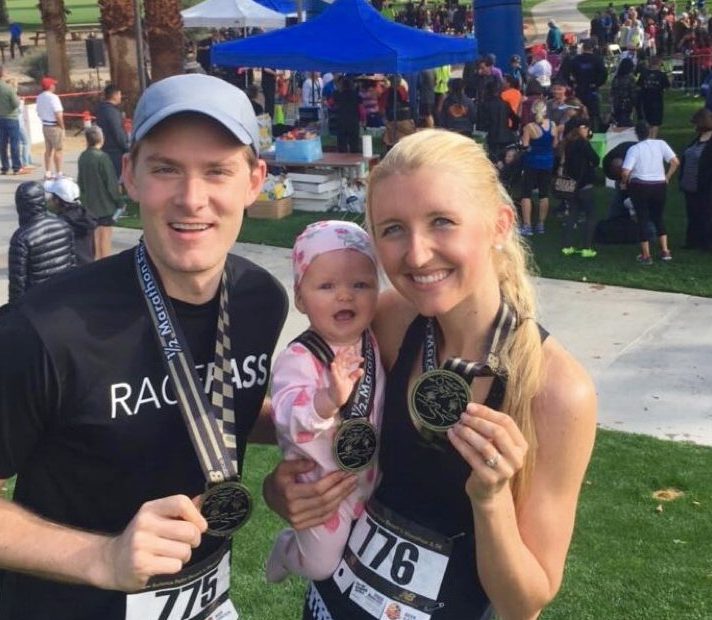 A few weeks ago we ran the Palm Desert Half Marathon together!
We pushed baby Reagan in a jogger and had the best time.
I had Palm Springs on my list to get to this year as a trip
since I’d never been, and when we saw that there was a
fun half marathon over a long weekend, that sealed the
deal! We signed up and got my cousin + aunt to join
in on the fun. As it got closer I was worried about
having the jogger and how Reagan would do in it for so
long, and I was starting to think it wasn’t the best idea…
Chase told me it would be fine, and he ended up being right!
(I’m sharing this post a little later because we just finally got a
few official race photos back and they were too fun not to include!) 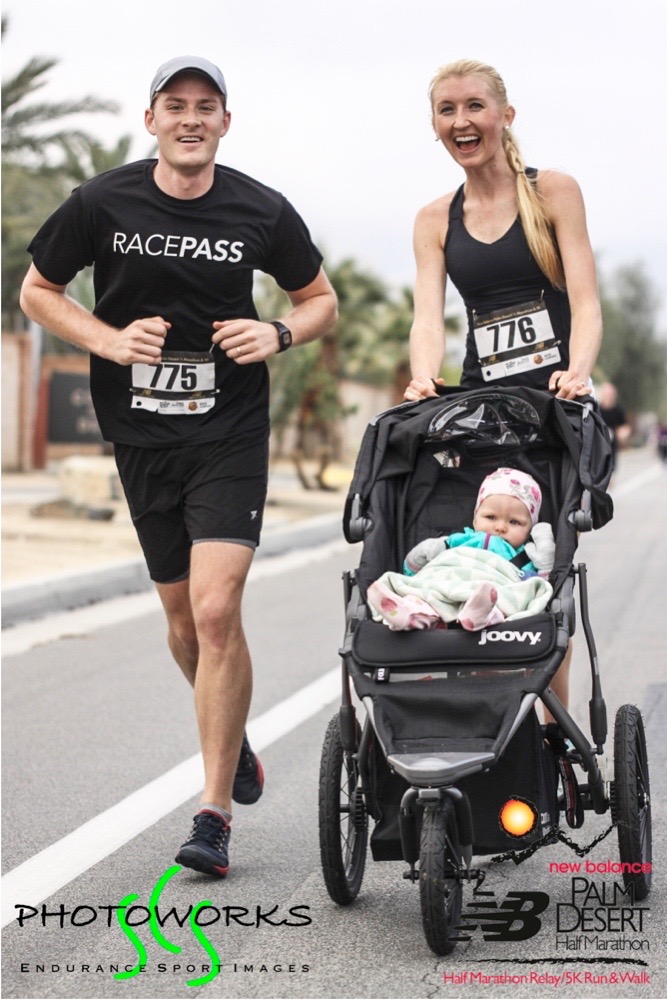 ^^All race photos by SCS Photoworks^^ I can’t wait to show these to Reagan
one day of her first race :) She really did so great and made it so fun!
She woke up around 5:30 that morning and nursed, then we
got her to the race and put her in the jogger and started the
run at 7. She was happy in the stroller and fell asleep about a
mile in, and stayed asleep for 10 miles! She woke up right
near the end and I had a little bottle of some milk for her
which got her through to the finish! It was so much fun and
running with my cousin (who is about to get married) made
the miles go quick as we chatted and caught up! We loved it!!
Here are some pictures to remember the day and her first race: 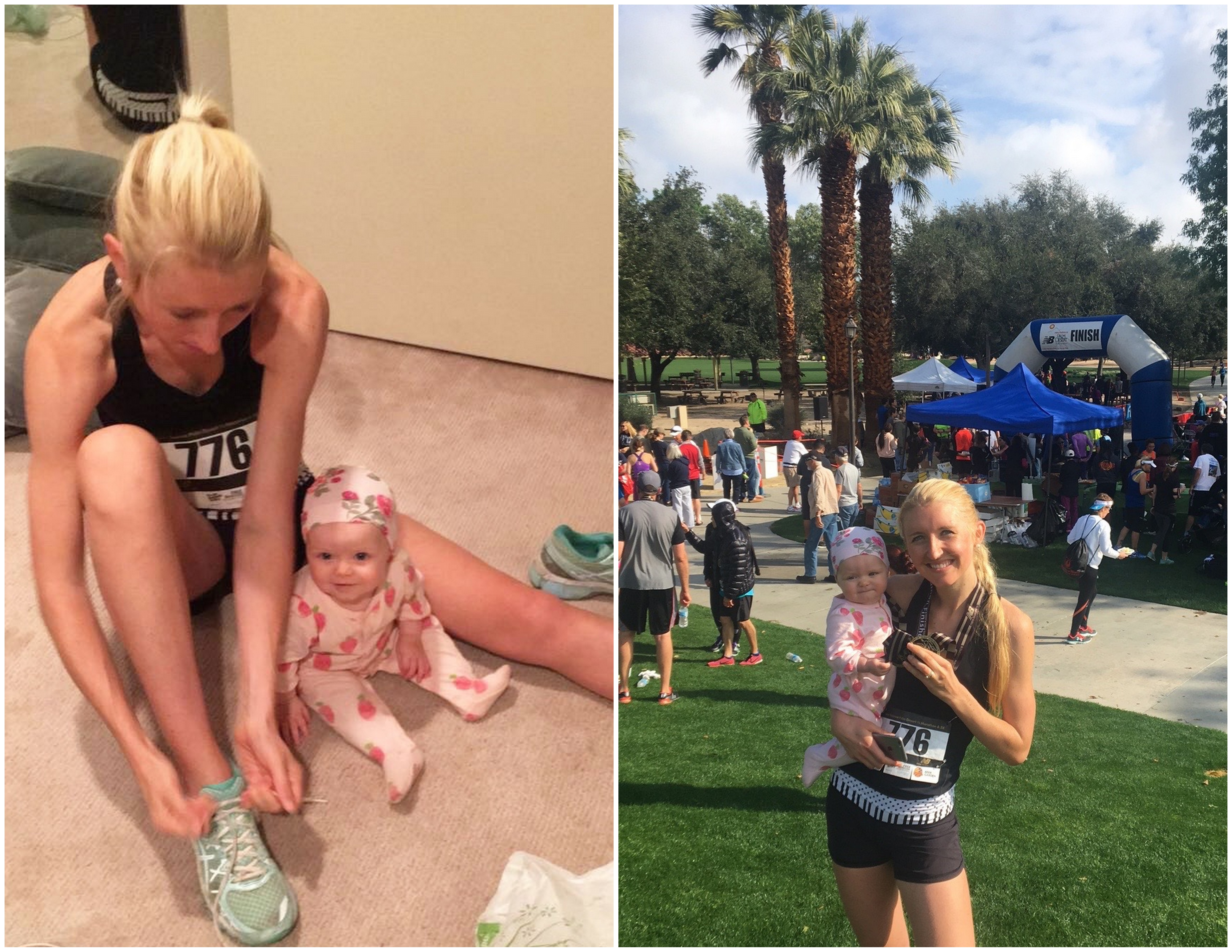 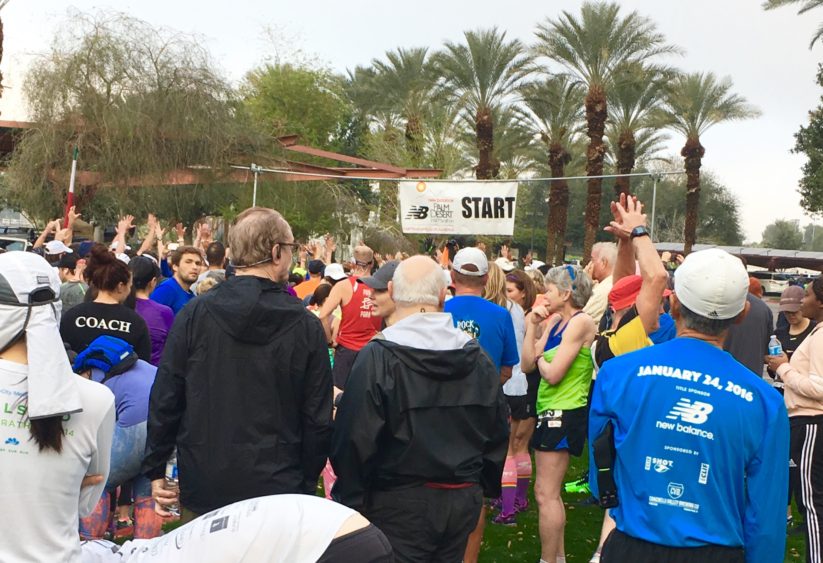 I love the start of a race. It’s so fun, full of adrenaline, music, and jitters.
This time was so fun because we weren’t nervous at all, just planned to
run with the stroller and have fun…and that’s exactly what we did! 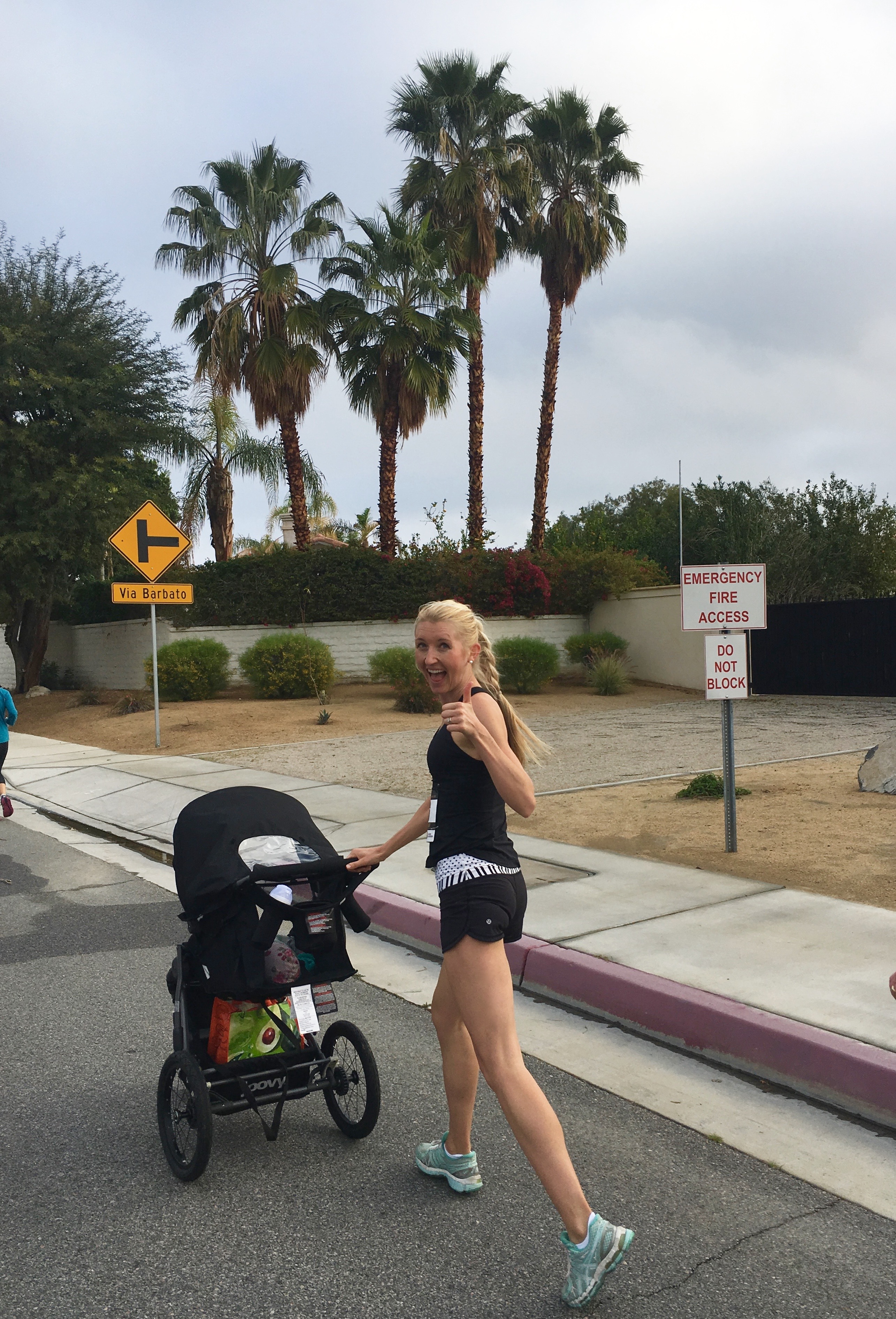 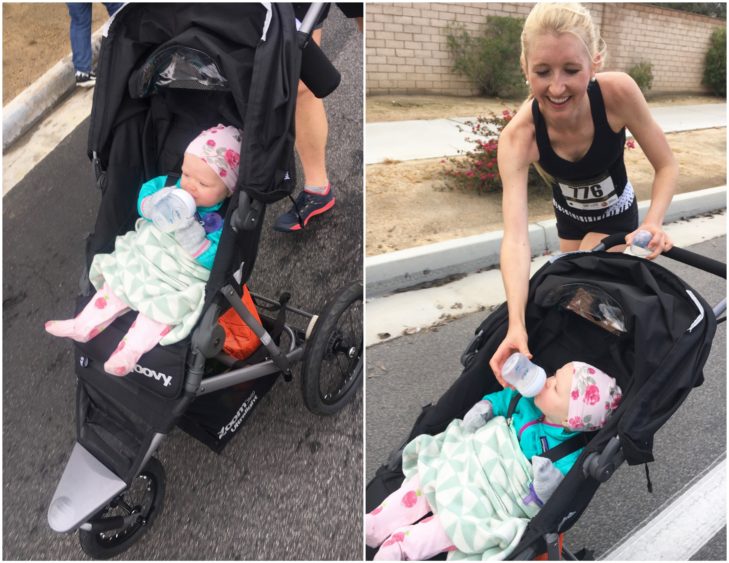 ^^ Hydrating on the go – haha! We didn’t have to really stop at all,
which was nice to run the entire time even if it was slower with the stroller! 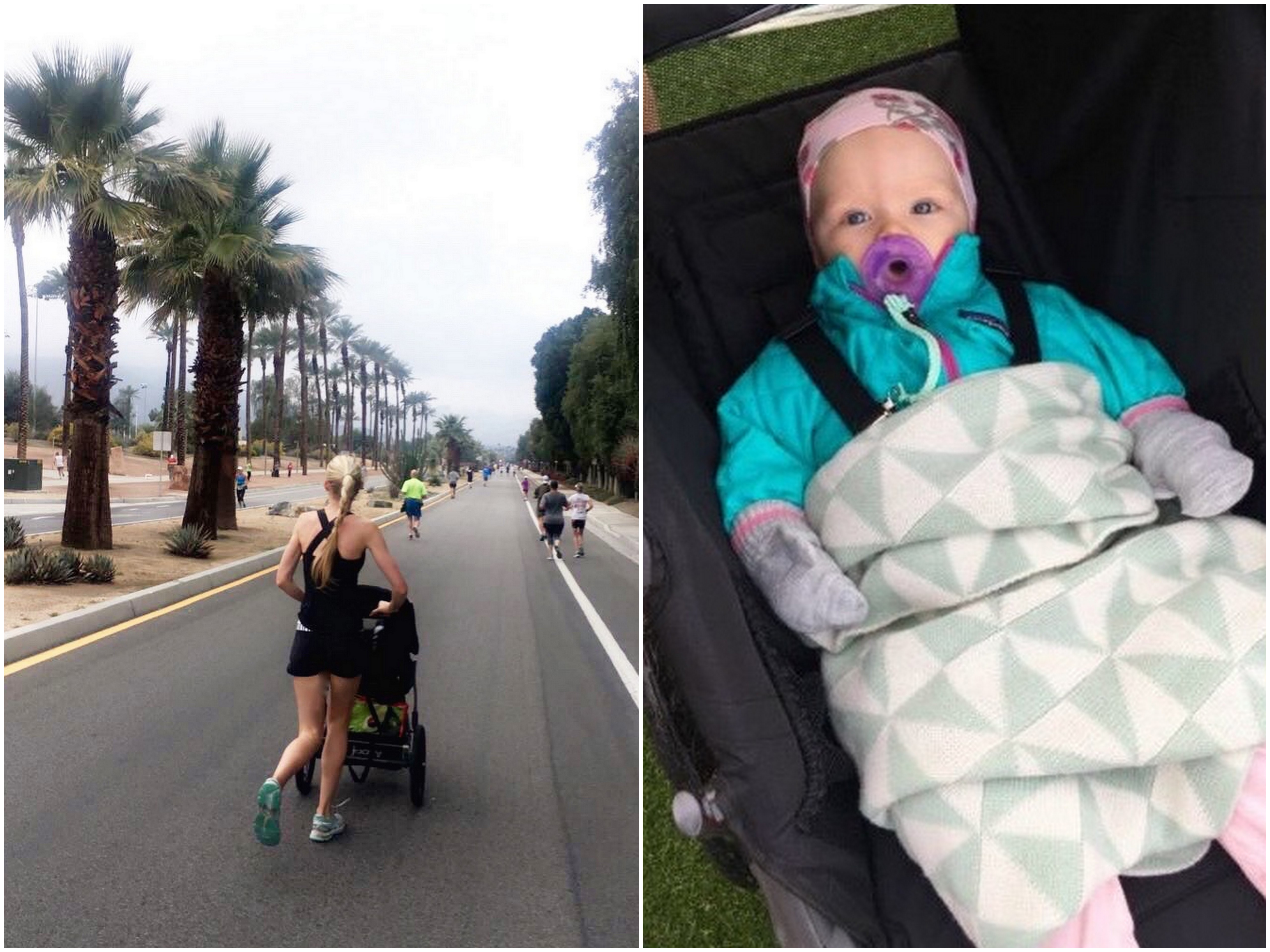 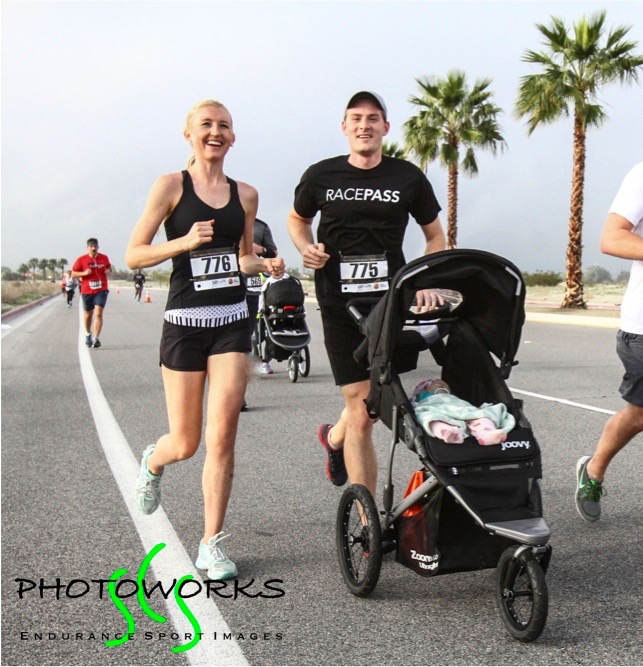 *All race photos by SCS Photoworks 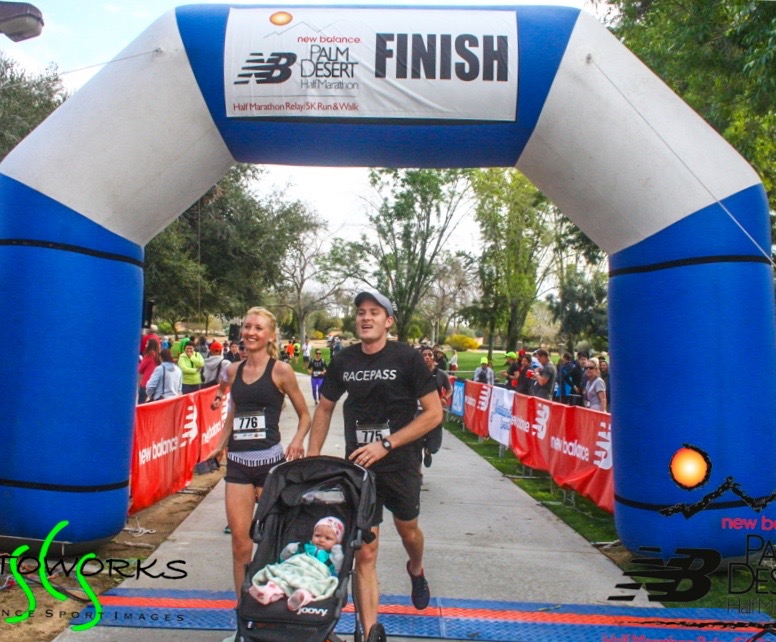 The race photo of the finish ^^ So fun! 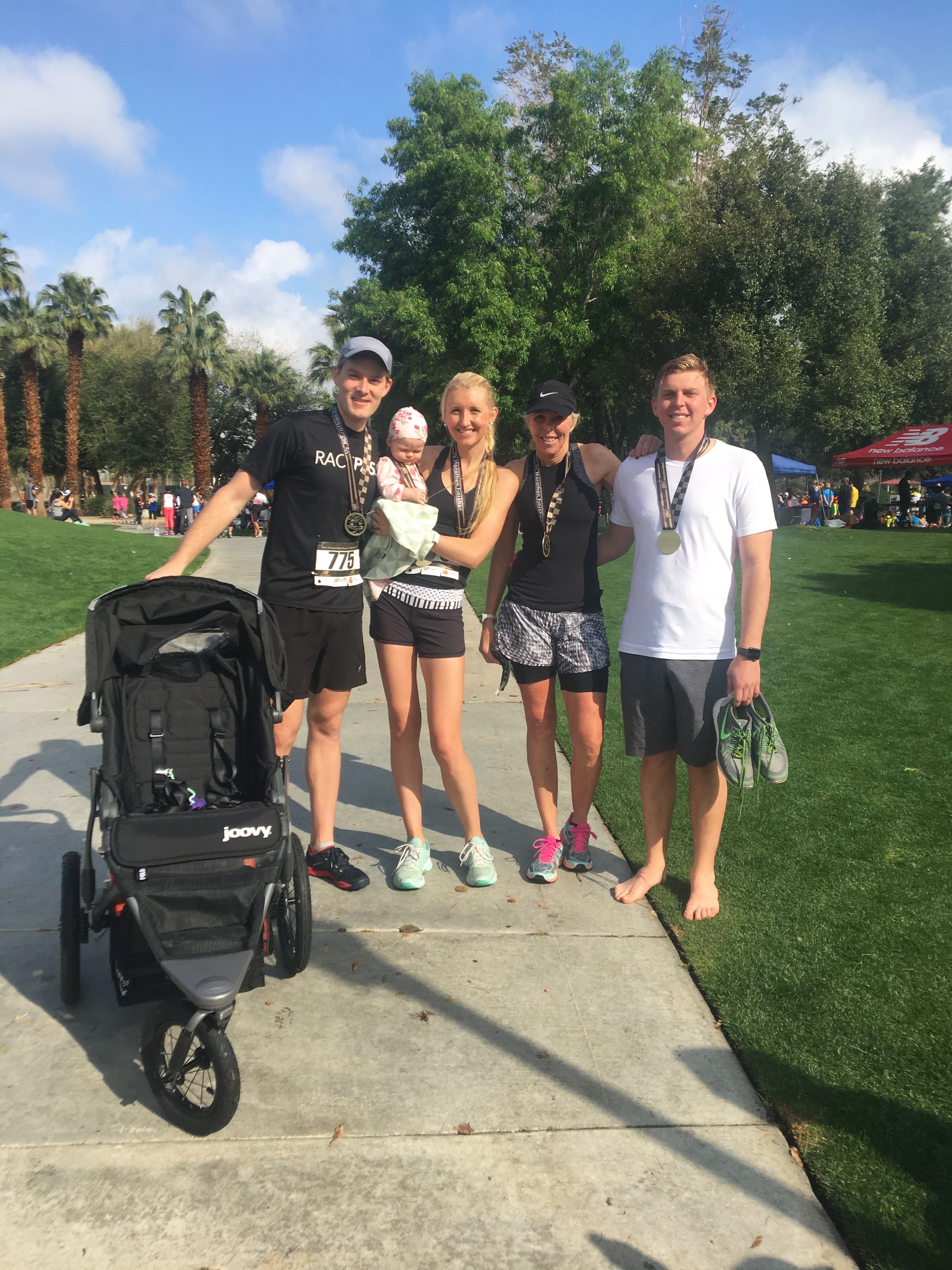 So fun to run with this crew – My aunt Laurie and cousin Travis! ^^ 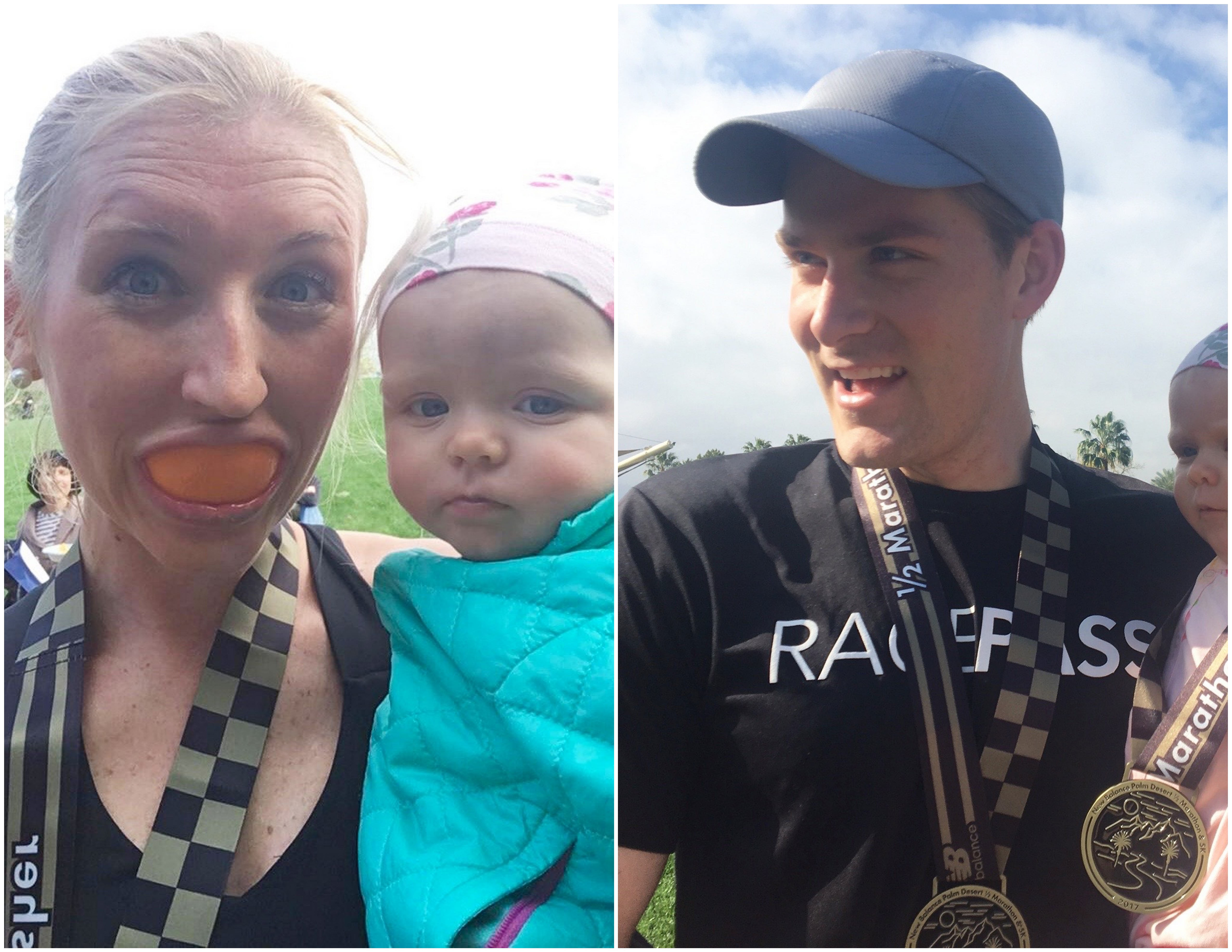 Hanging out after the race and eating oranges ^^ 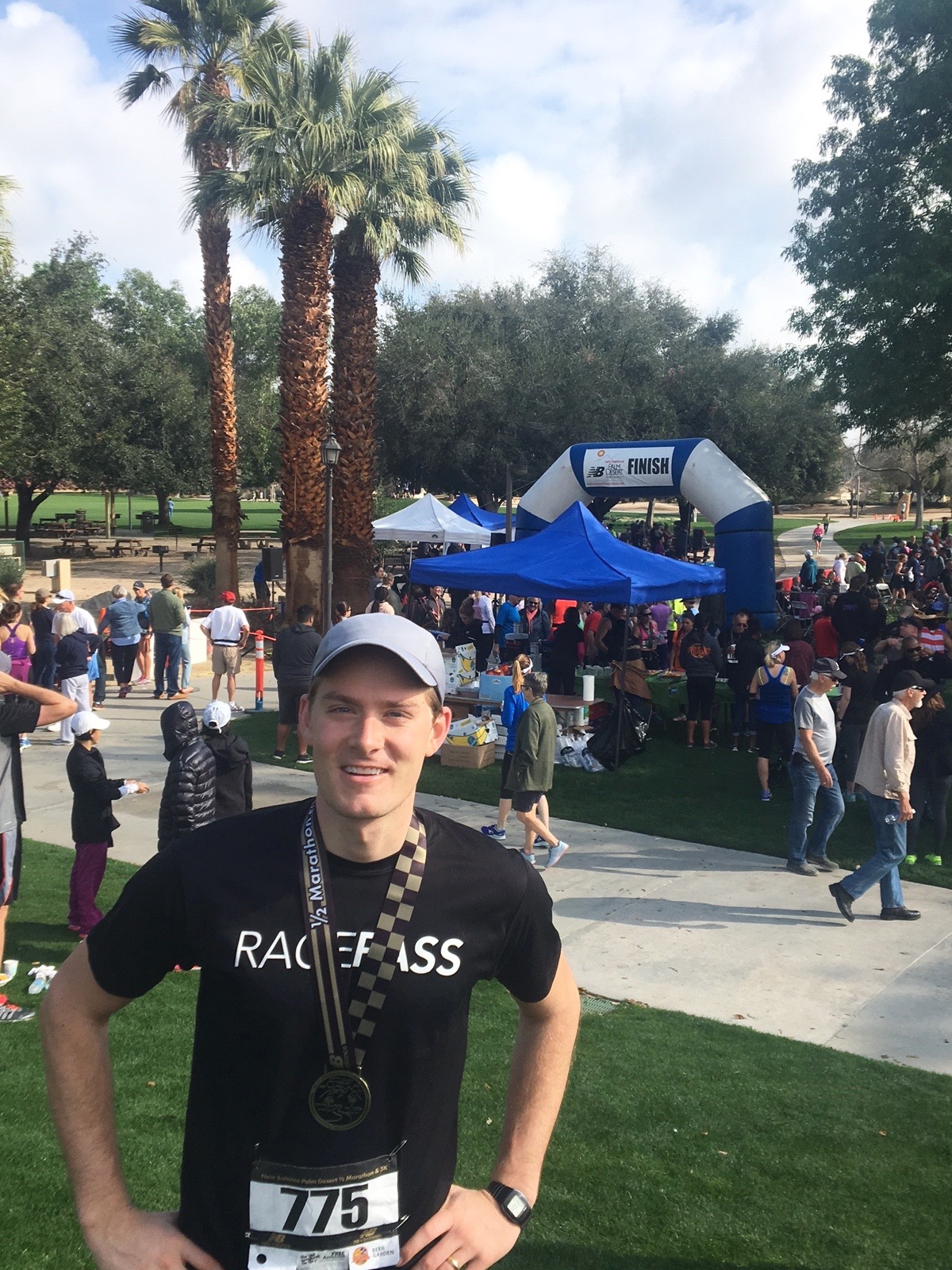 After the race is the best too– eating food, stretching on the grass, and being done! 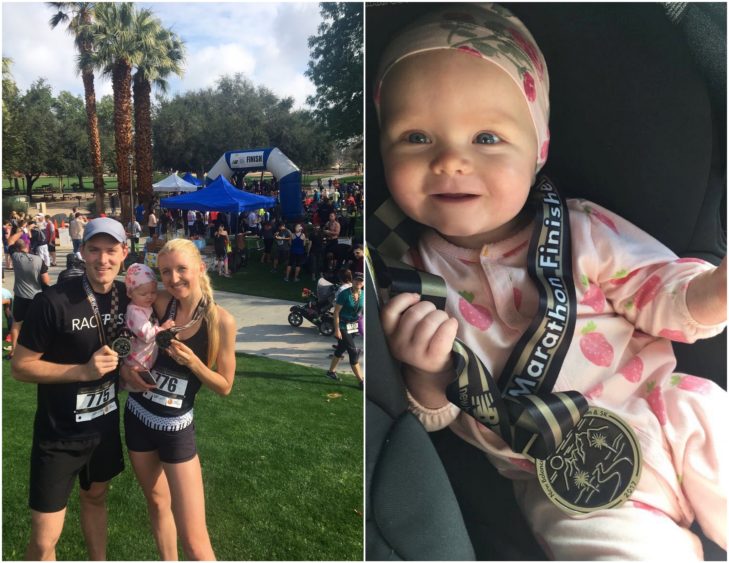 Baby girl was proud to get her own medal :)
As we ran through the finish they said,
“Oh the baby gets a medal too!” Hah! 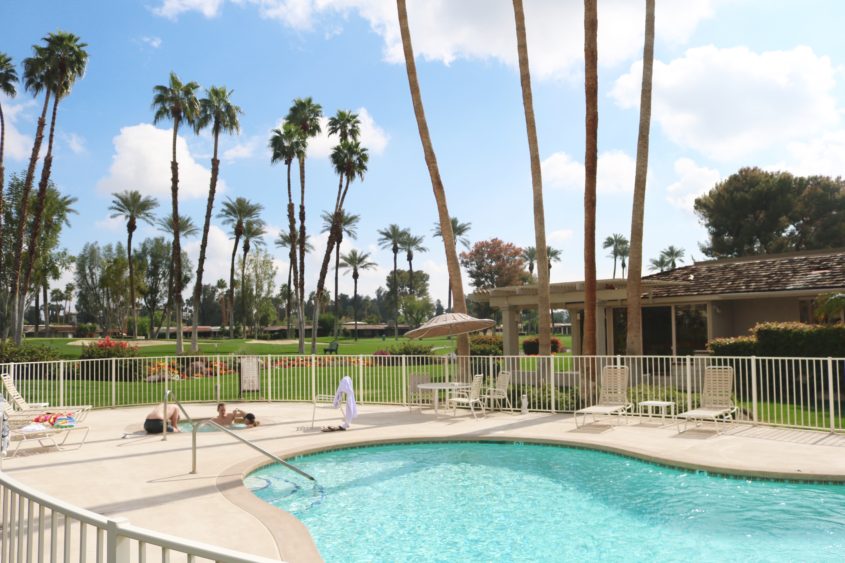 The pool was calling our name after the race ^^ 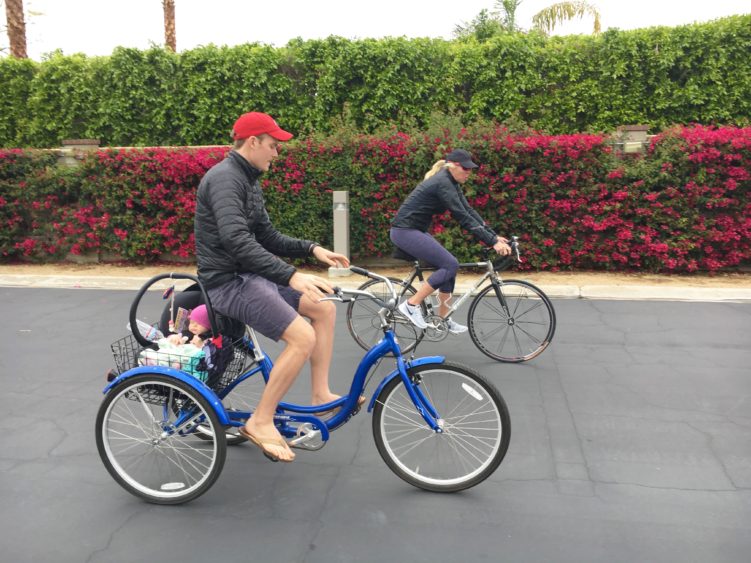 Later we showered, napped, and of course went
on a little bike ride to shake our legs out. Reagan loved
riding along in the back of this tricycle that Chase was on ^^ 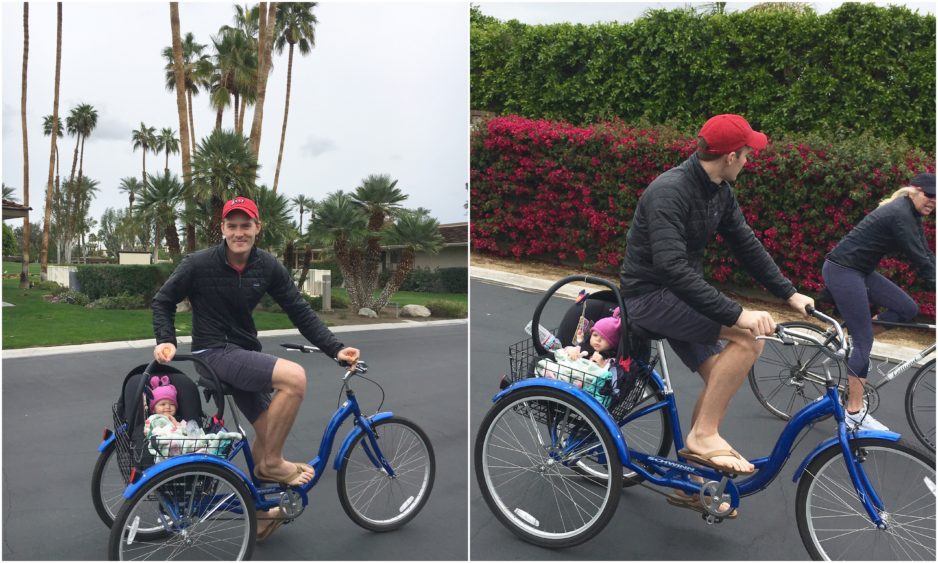 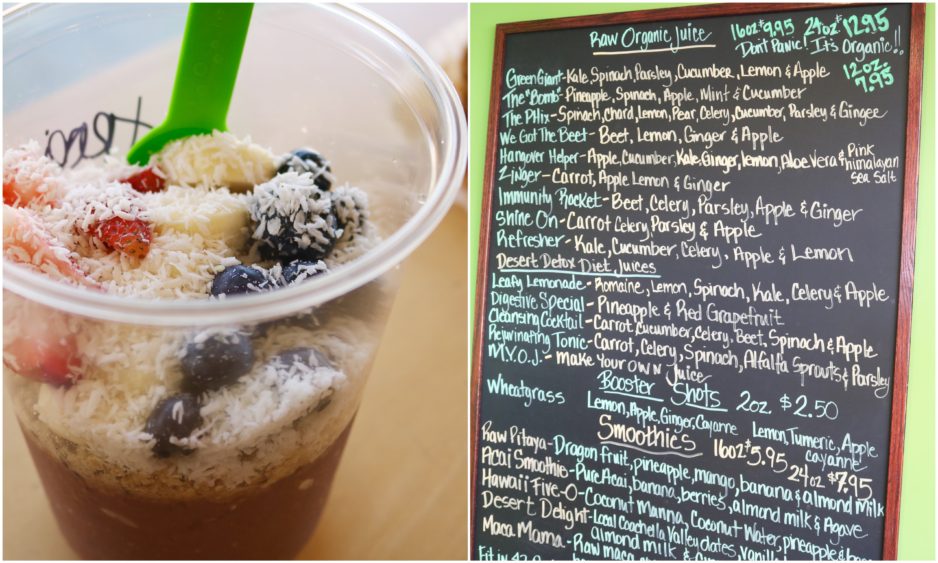 We fueled up on some acai bowls at Fresh Juice Bar, tasted SO Ggood after the race! 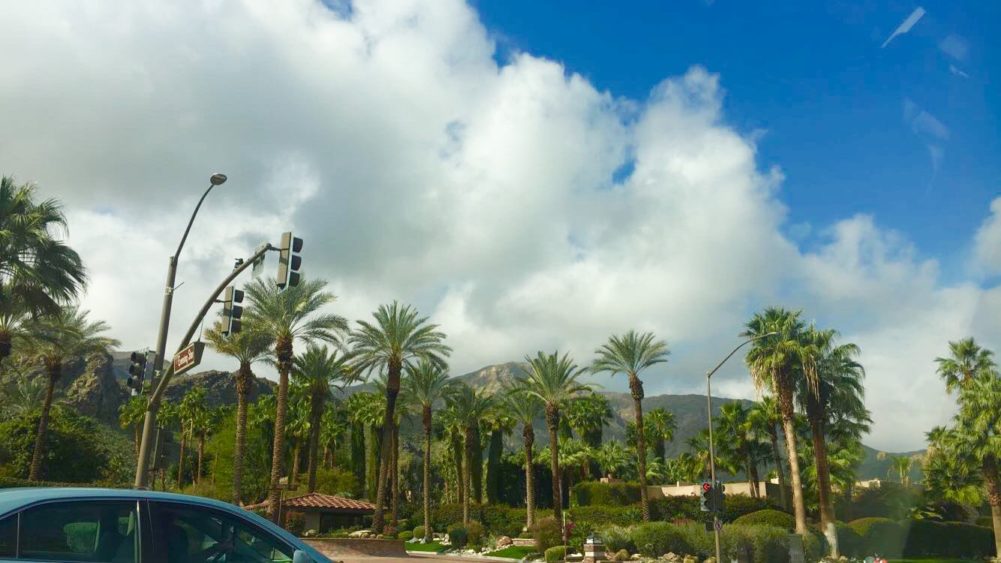 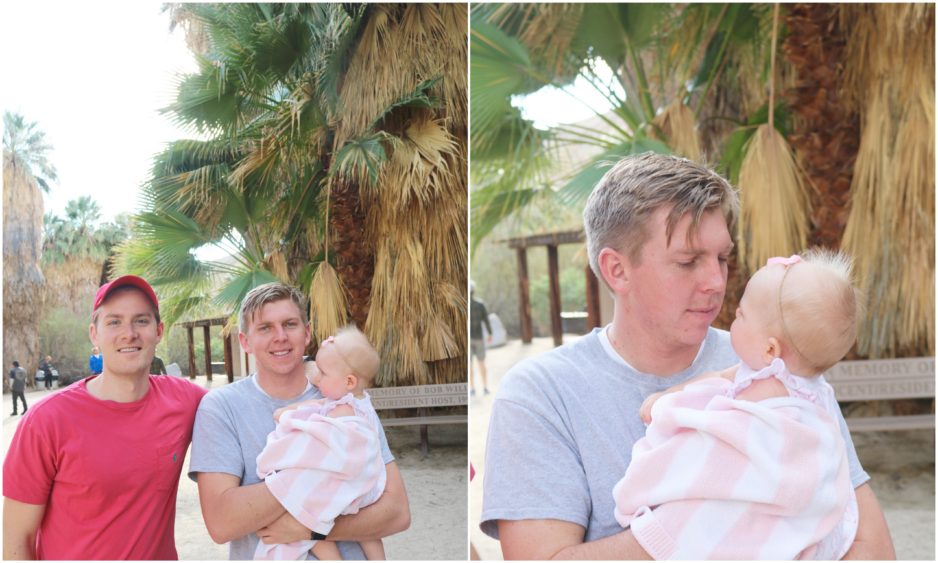 We did a tiny little hike at Thousand Palms (see more here) …and yes,
with my crazy family we bike AND hike after a half marathon – ha! 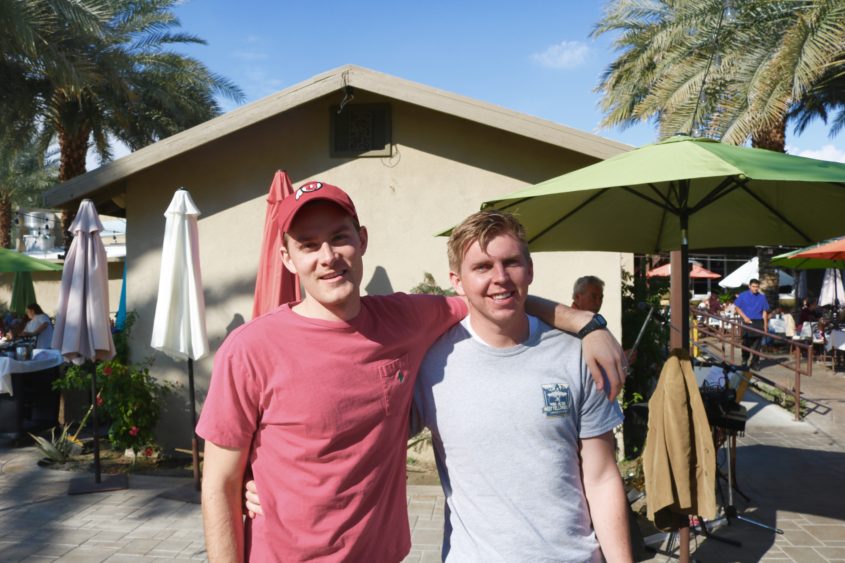 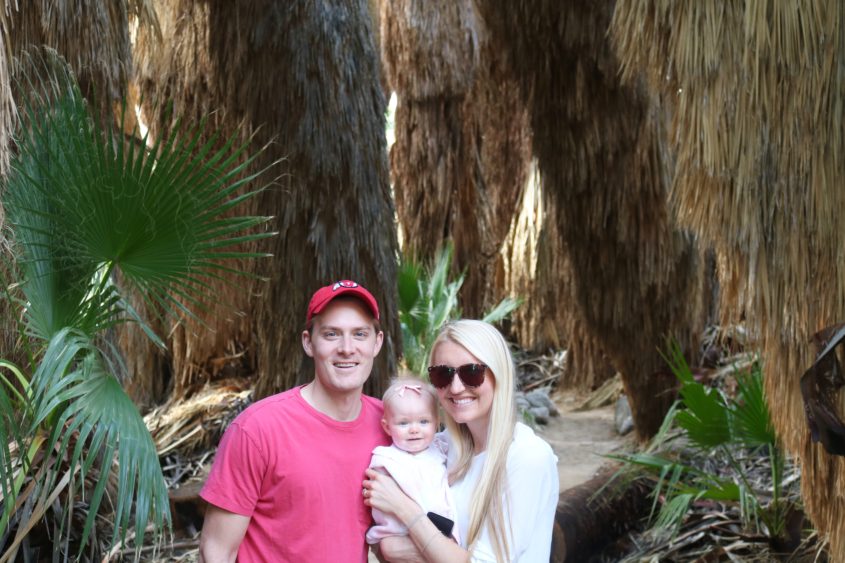 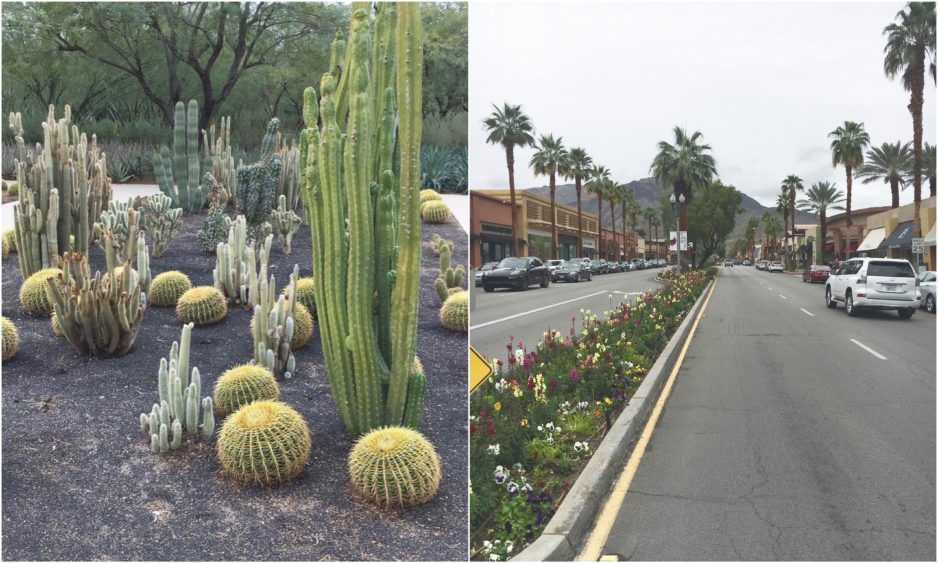 We strolled downtown Palm Desert before heading
to our race reward meal later than night at GRILL-A-BURGER: 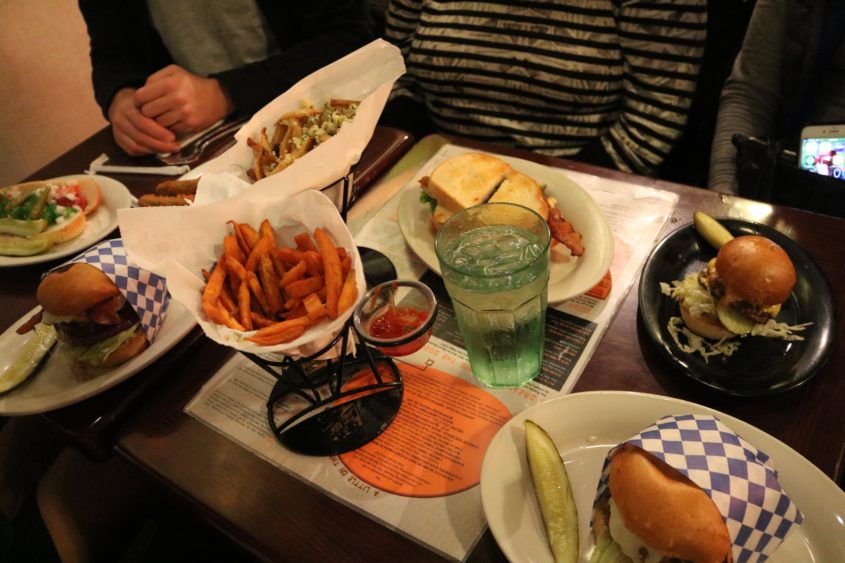 This is what I had craved the entire 13.1 miles …
burgers at the famous GRILL A BURGER!
My cousin and some friends had mentioned
this place to me, and I was so glad. You could
completely miss it because it’s just unassuming
in a strip mall, but you walk in and know it’s good
right away. It’s PACKED with locals and visitors,
it smells amazing, and the menu speaks for itself. 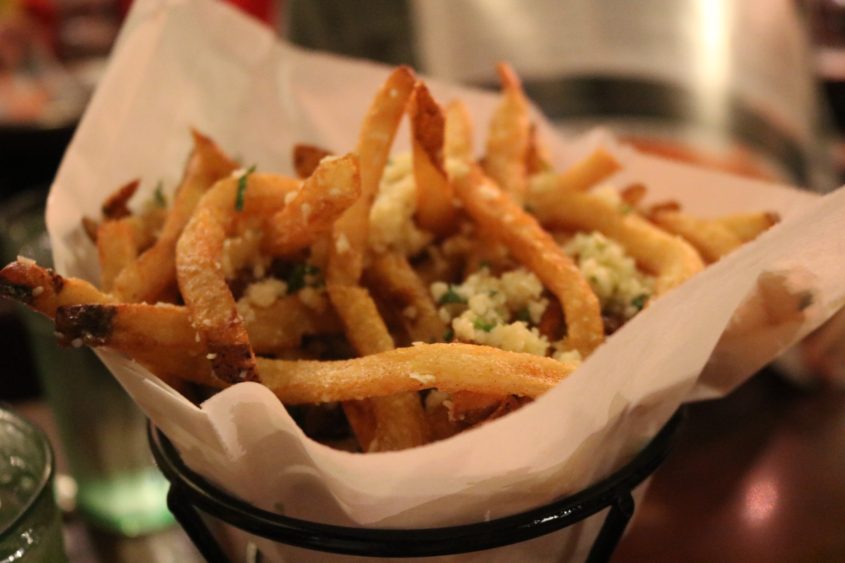 We started with parmesan fries that disappeared way too fast :) 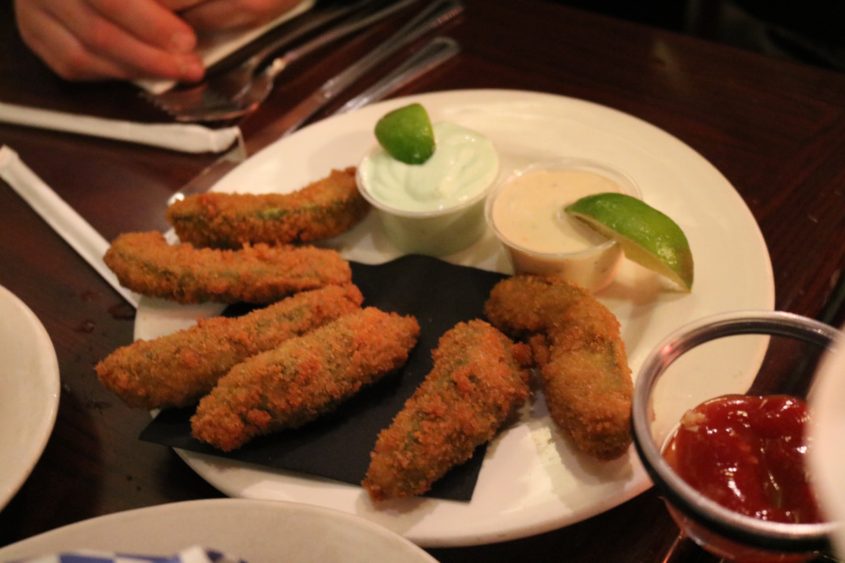 Then, the BEST appetizer that you have to get if you visit ^^
California Avocado fries! I had never had these before, but this
place is known for them…battered avocados with a sour cream
lime sauce which was to die for. I honestly am craving these now! 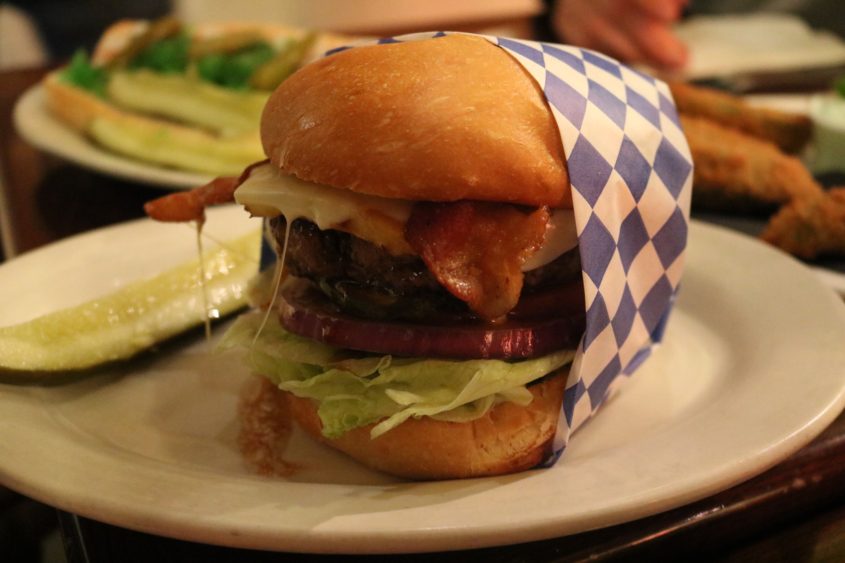 There are so many fun burgers on the menu that it’s hard to choose!
We went for the mushroom swiss burger and Honolulu Hulu with
sweet teriyaki glaze + pineapple. I loved both, along with the chicken
burger which I’d probably get again next time. So many good choices! 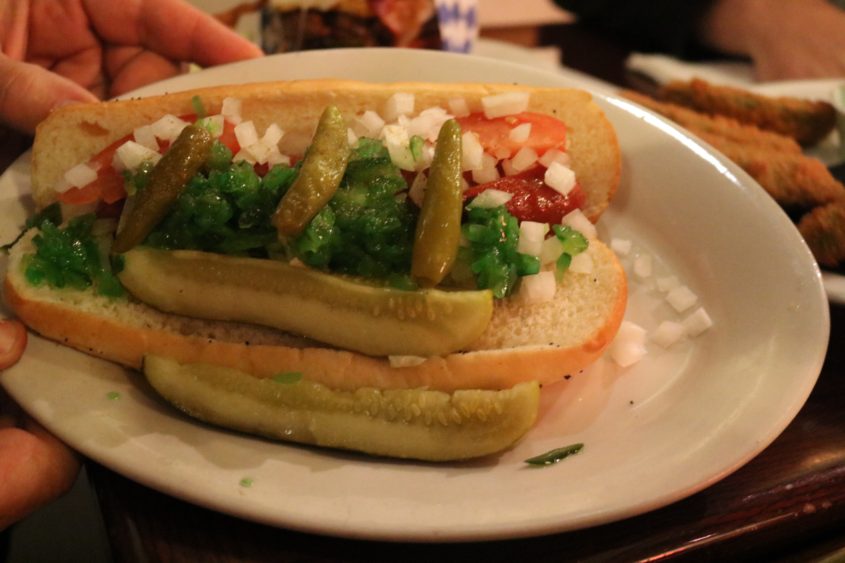 We had to sample their Chicago dog which was top notch. 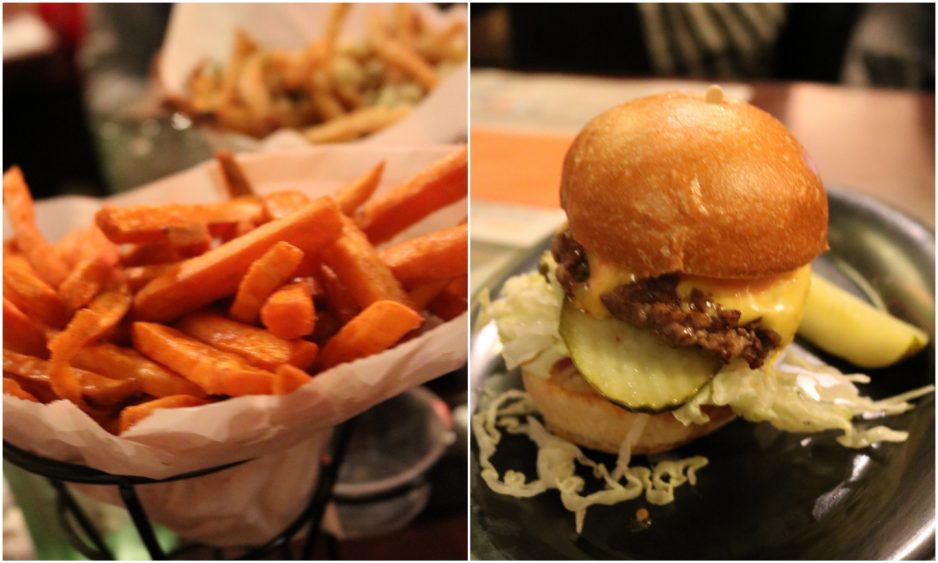 I will always order sweet potato fries whenever they are on any menu, period.
We also got a slider which was so simple but SO good. 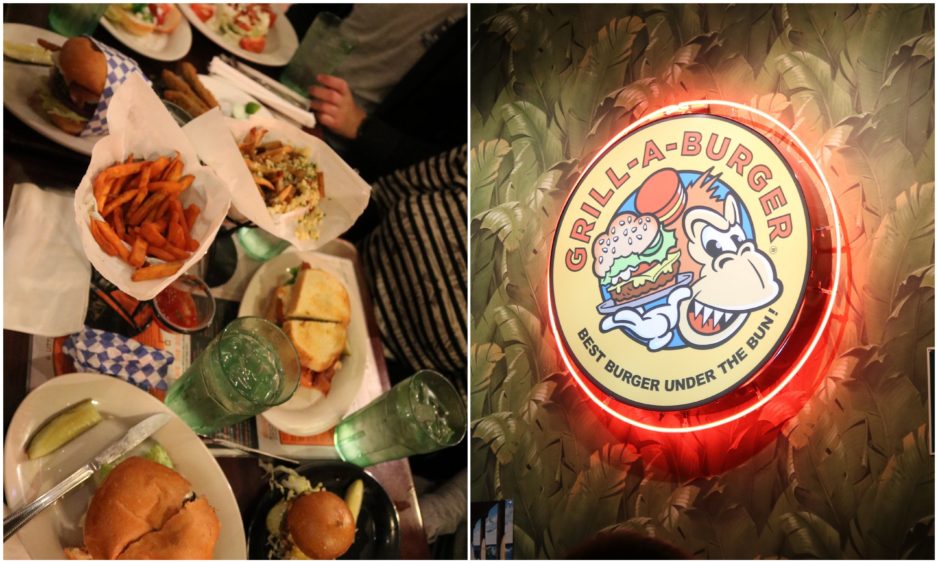 Grill-A-Burger is a great place to eat while in Palm Desert…
you might otherwise miss it since it’s just in a strip mall,
so write it down and seek it out when you’re in the area!

I hope we’ll be back for this race (and those burgers) next year!

4 thoughts on “Palm Desert Half Marathon!”