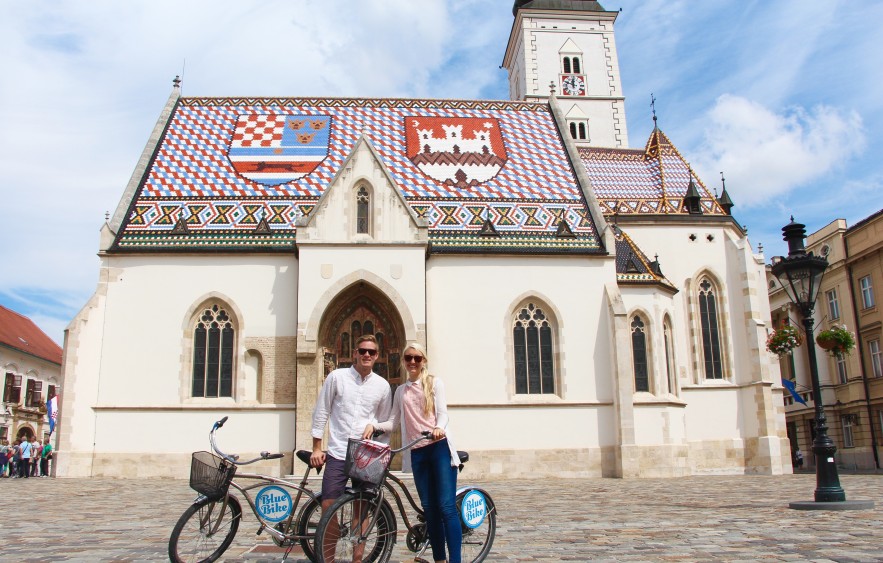 getting on a bike in a new city always guarantees that i will like that place.
there’s just something about seeing a place from a bike, am i right?

we wanted to get on some bikes and get some croatian history while in
zagreb, so we joined a blue bikes tour and spent a day pedaling around town. 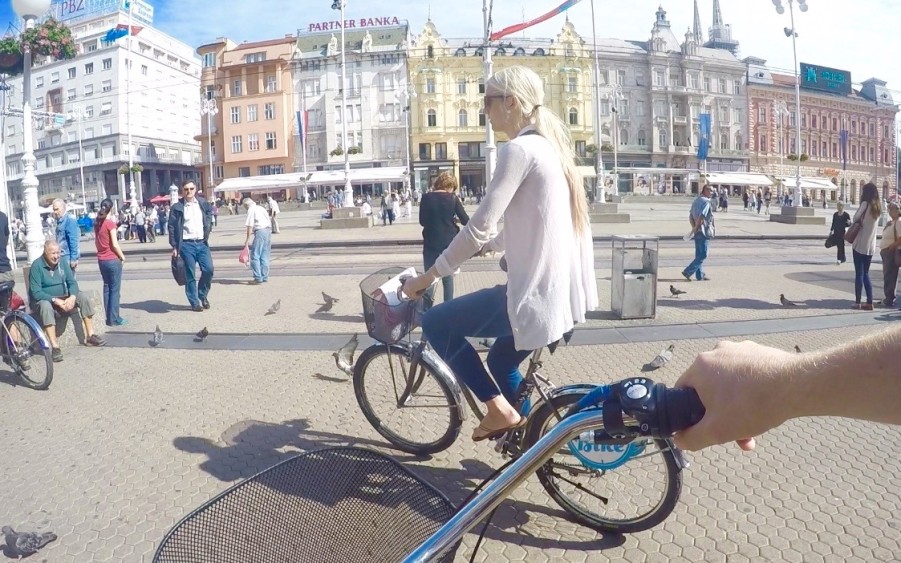 clearly serious about my bike tour! ^^ 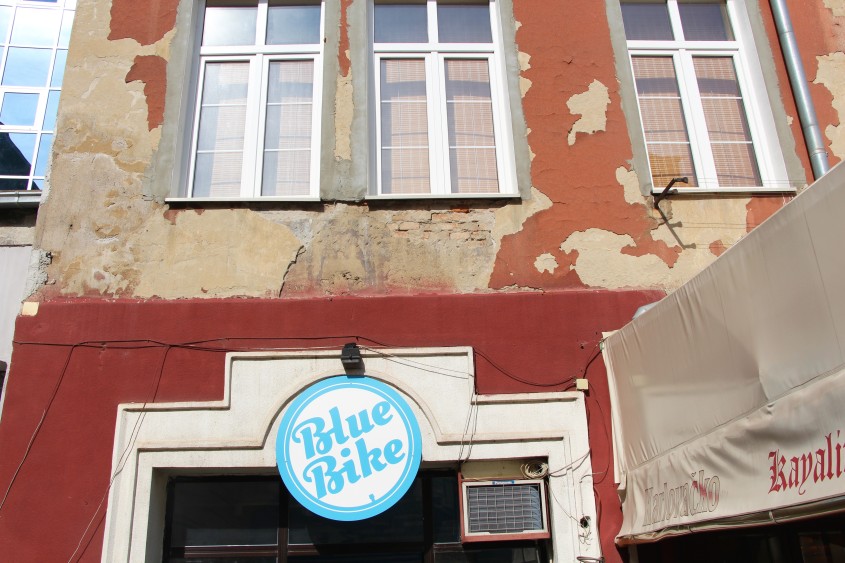 blue bikes is right off the main square of zagreb, back in
a little courtyard that takes a second to find. once you’re
there, you’ll be greeted with the friendliest bike shop
and their clever slogan on the wall, made of shoes: 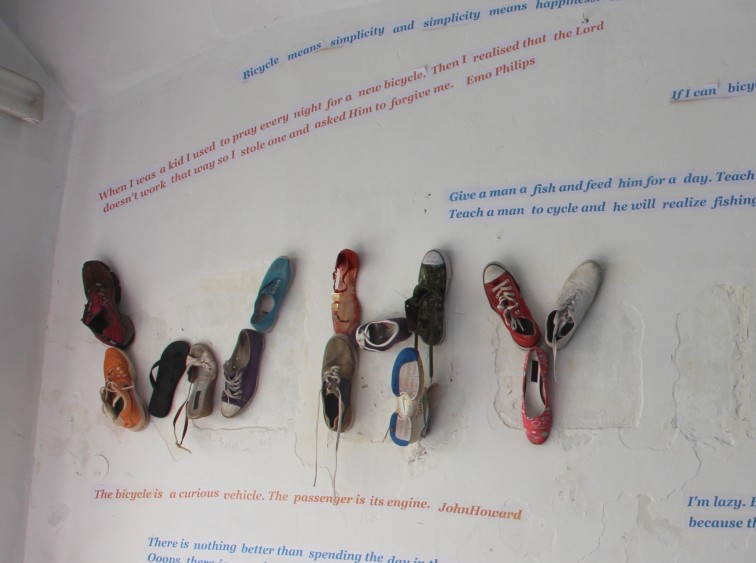 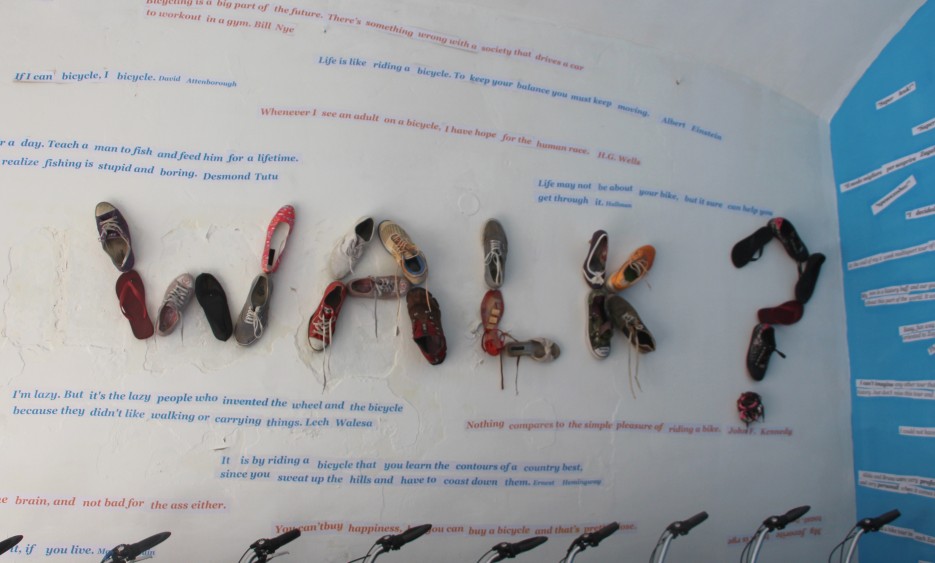 ha! why walk when you can bike? 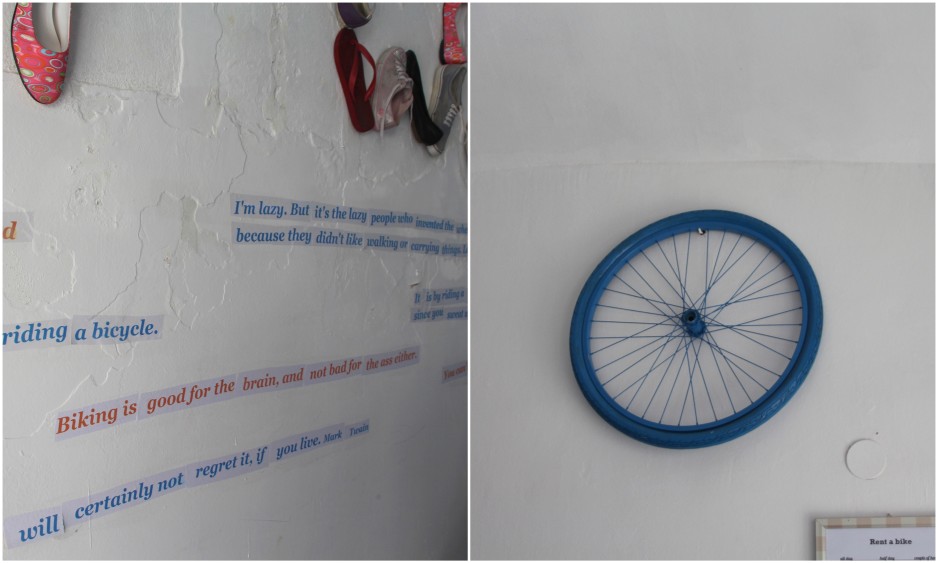 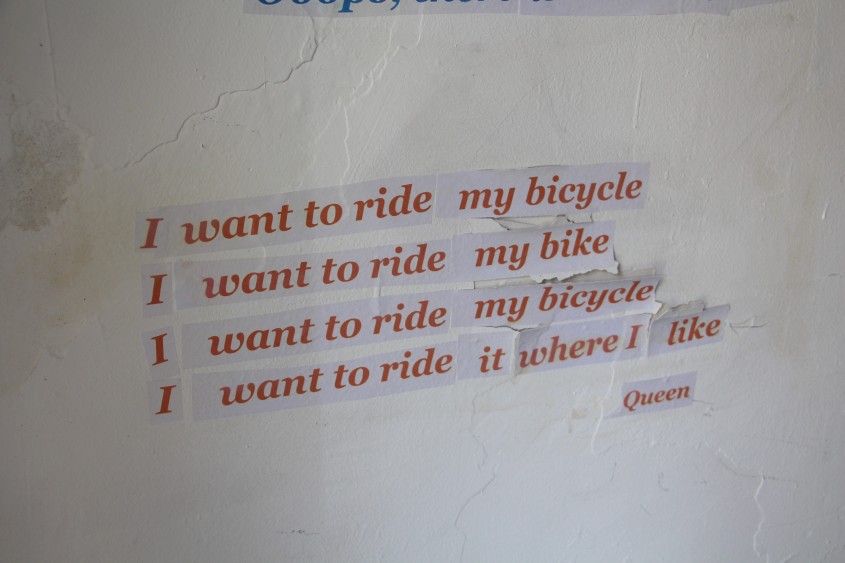 we read all of the great biking quotes + lyrics plastered on the wall
while waiting for the tour to begin. they show the personality of this co. 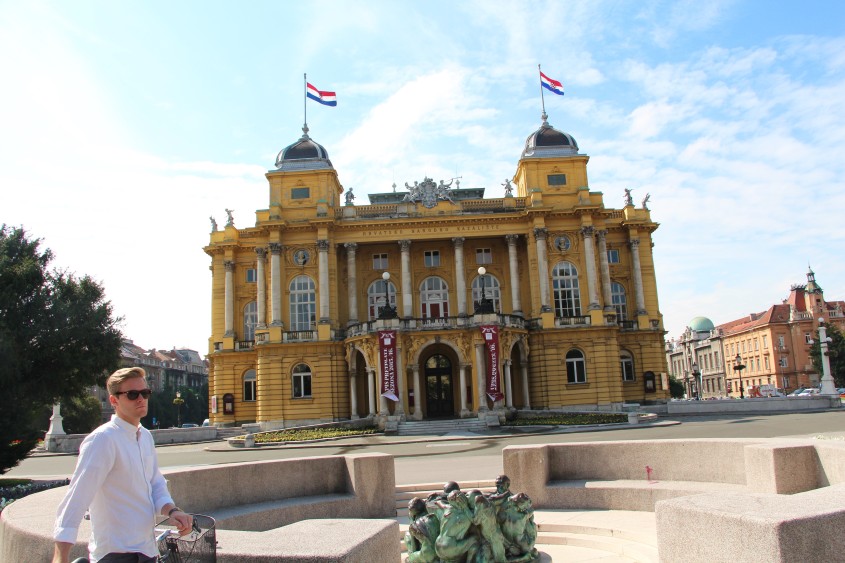 the bike tour began through the old town, past each city
square and town monument, and by some unique sights too. 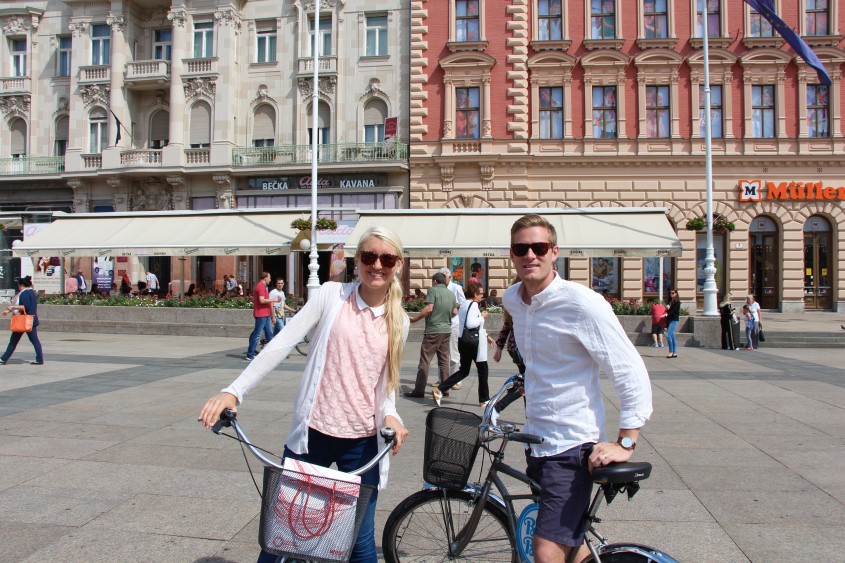 it is pretty crazy to think that zagreb was founded in the year 1094,
but through all the history and different rulers, it didn’t gain
independence as capital of croatia again until 1991. so recent! 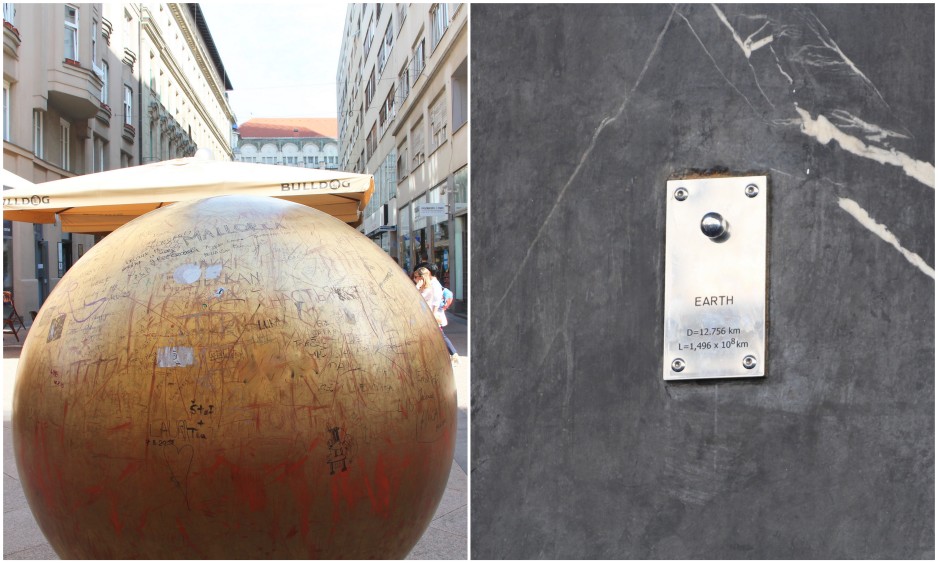 our guide bruno showed us a fun little piece of art through the city – an artist
created statues of the entire solar system of planets spaced out and sized in
scale. the first one we saw was the sun, (seen on the left)..and the earth, that
we biked past later, is scaled down in size comparison to the sun. mind blown!! 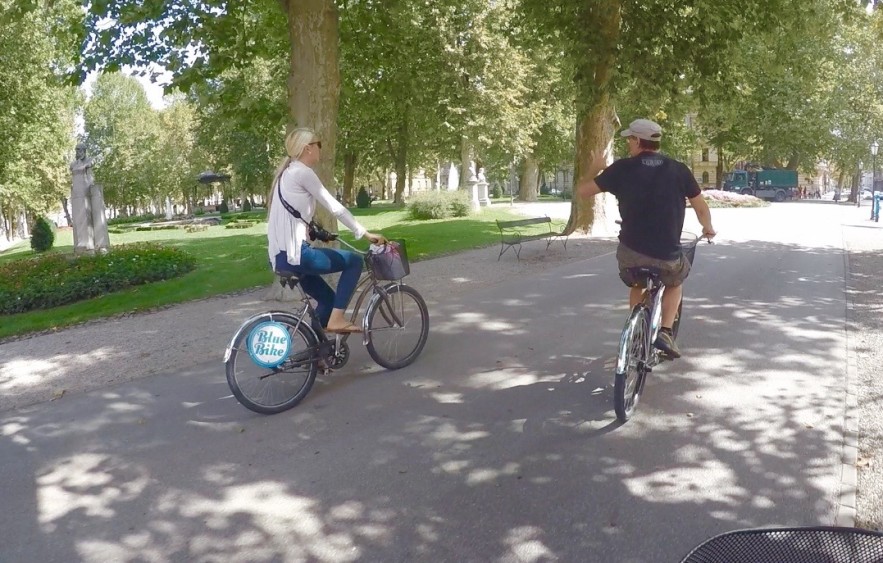 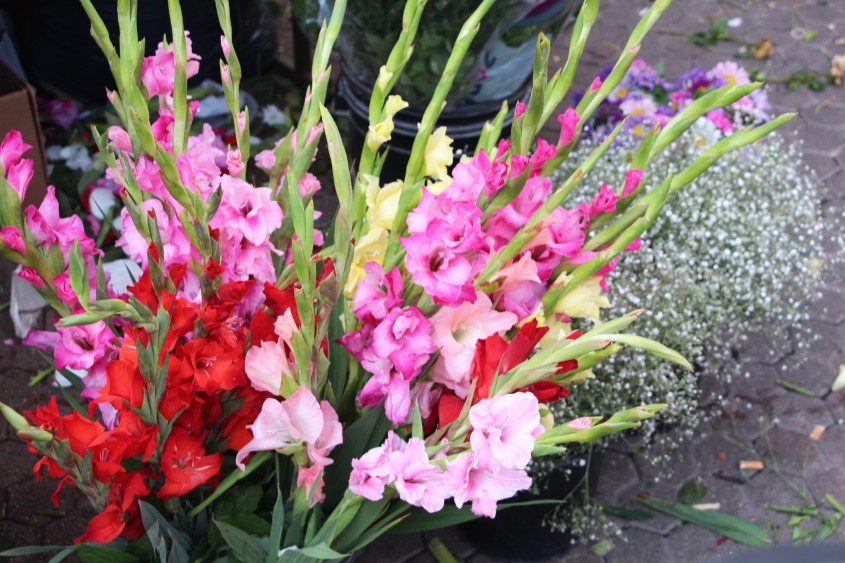 past the flower market we rode, and up to the top of old town: 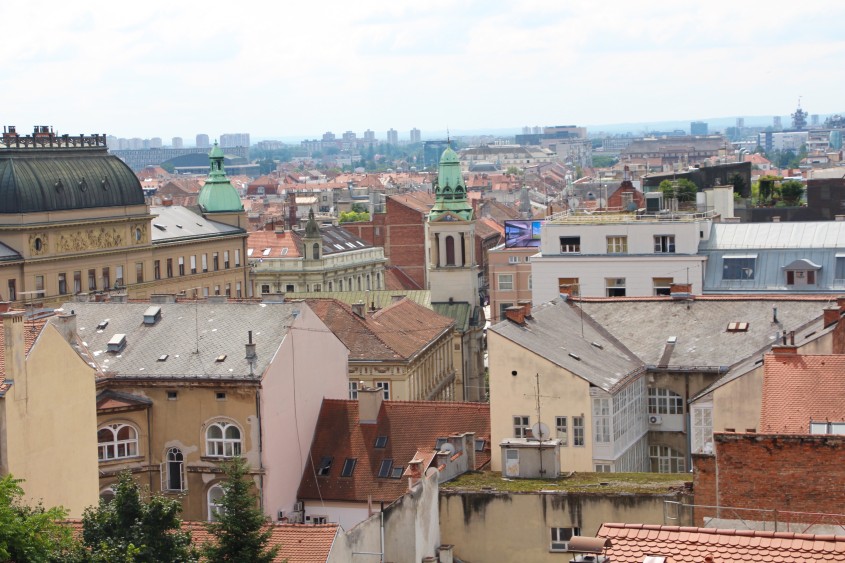 this was quite the view of zagreb ^^ as we stood taking in the view,
our guide had timed it perfectly with the 12:00 noon hour when a
cannon blasts out of the tower right where we were standing. it
was louder than you can imagine, and got our hearts racing! 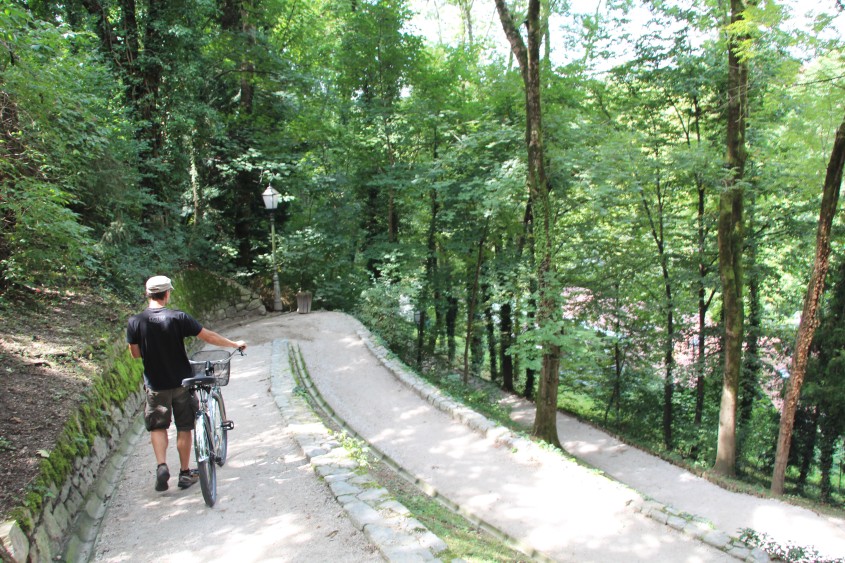 ^^ back down the hills we went, returning to the main city 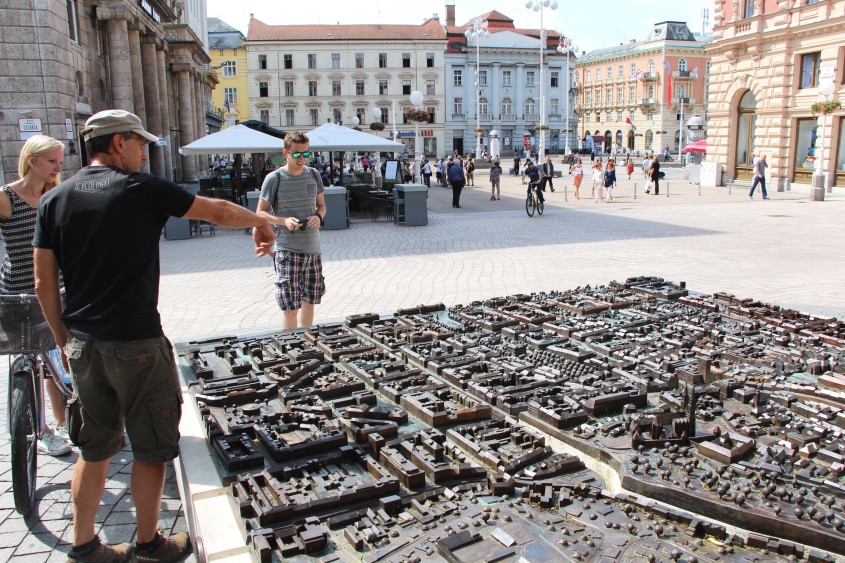 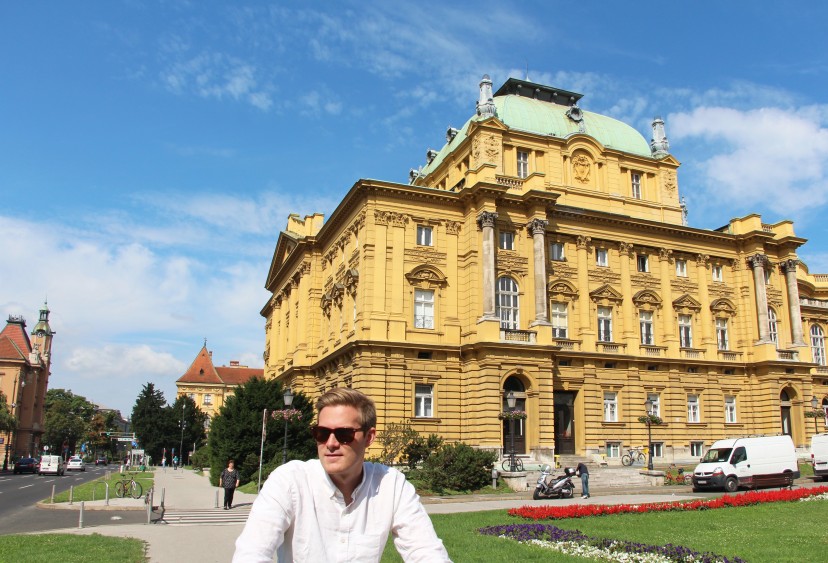 we learned that the important government buildings here are all
painted yellow, which is a tribute to the hapsburg family who once
ruled croatia as part of the austro-hungarian empire. croatia has
traditionally leaned toward western europe and not eastern
through its history, and this is another sign of that. 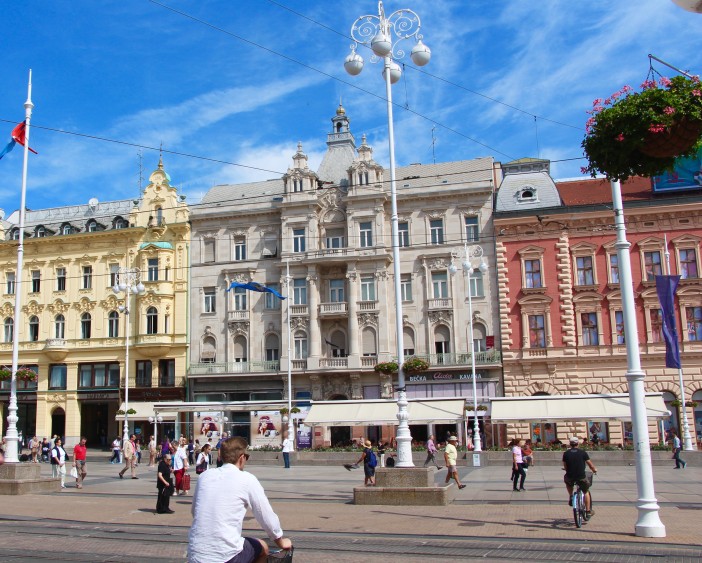 although it was 2 hours of easy biking, we had
definitely worked up our appetites on this ride.. 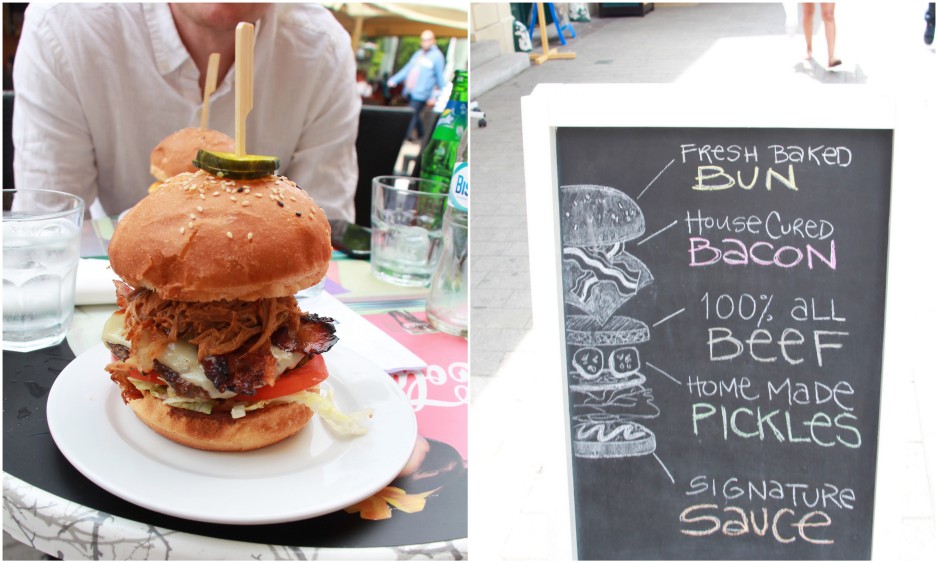 our stomachs led us straight to rocket burger on street
for some of the juiciest, most sinful burgers on earth. 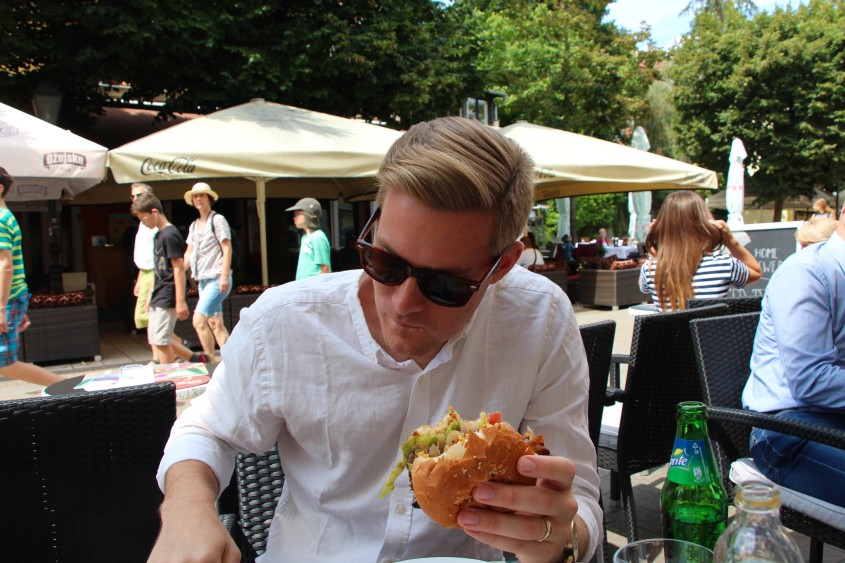 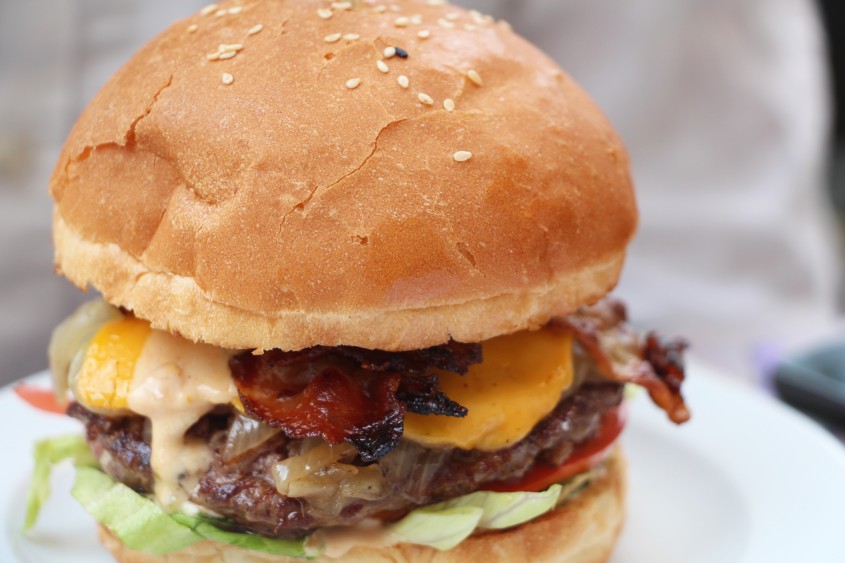 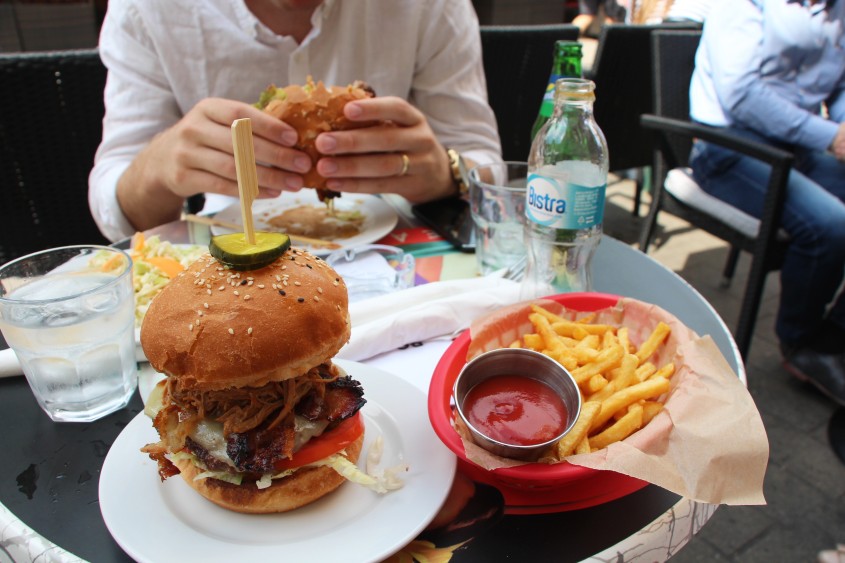 let’s talk about how my burger was pulled pork sandwich on TOP
of a burger with bbq sauce. i am drooling now and i was then! ^^ 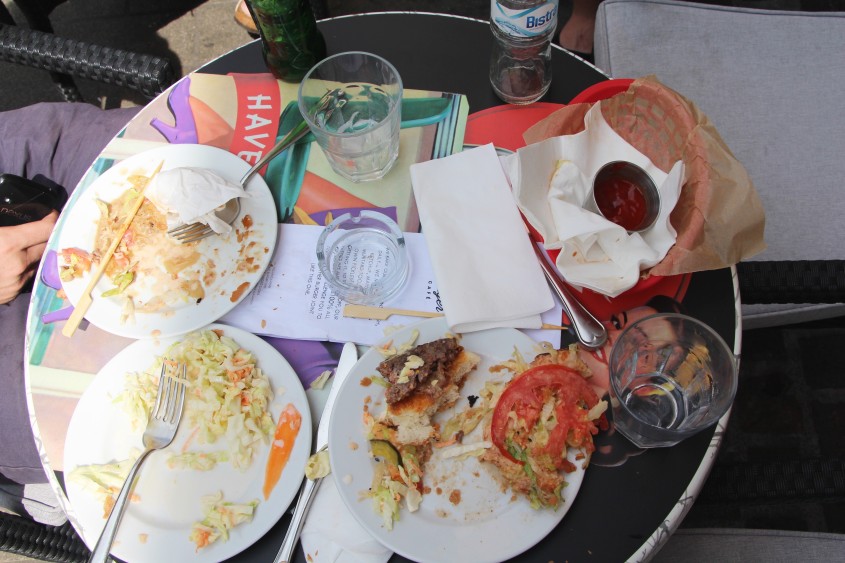 the aftermath ^^ is it obvious that we enjoyed it? 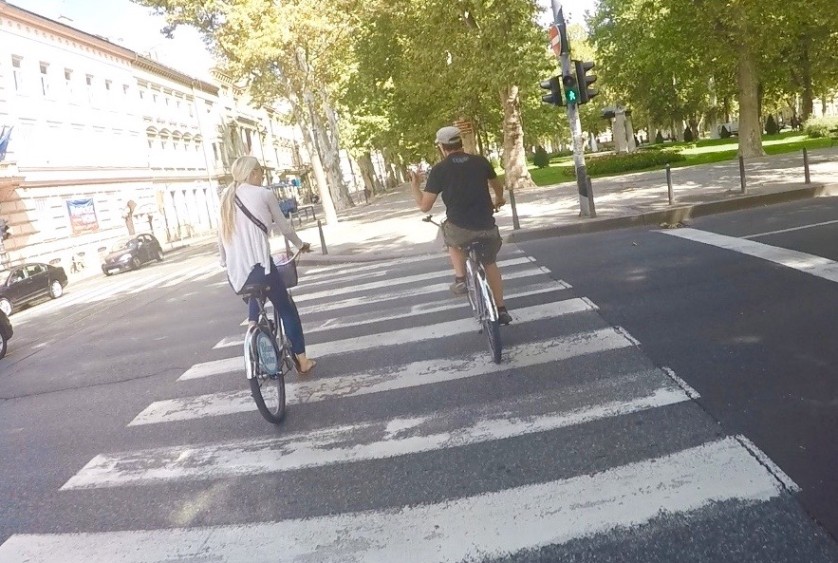 just another bonus of biking in a new city = getting to EAT more! 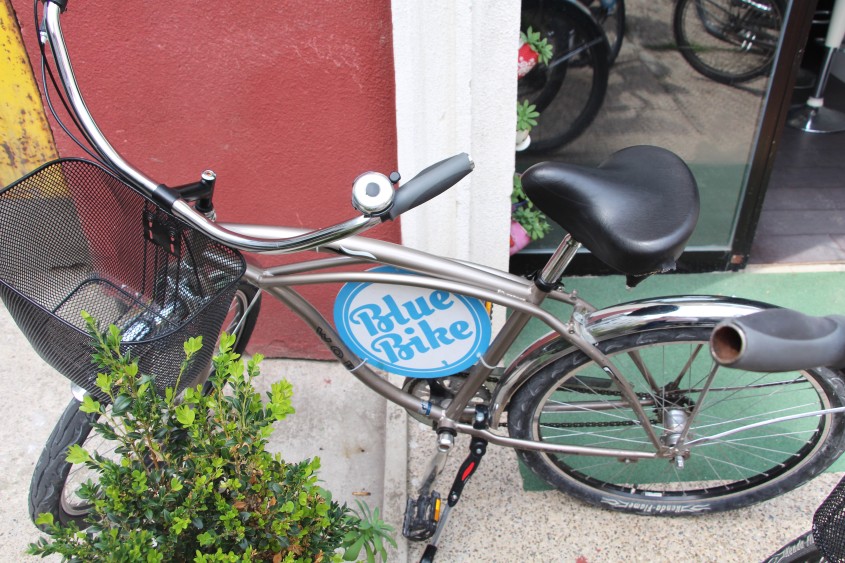 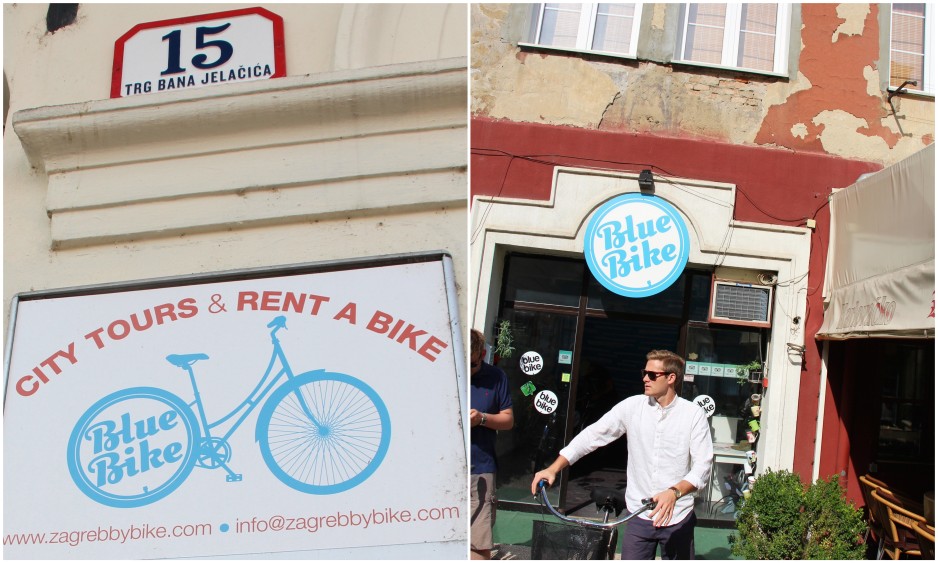 thank you blue bikes for having us on your tour.
it made us excited to experience the rest of this
country, which i’ll be sharing next. happy pedaling!

8 thoughts on “bike touring through zagreb”